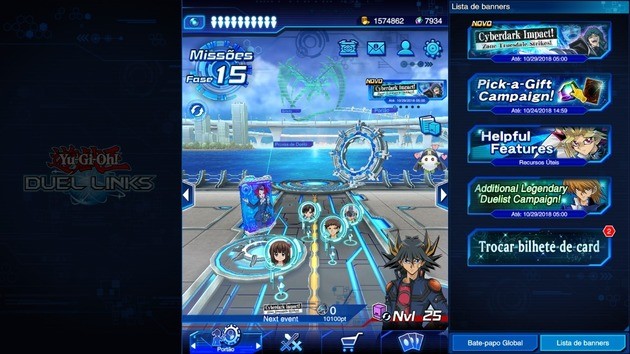 Yu-Gi-Oh! Duel Links is one of the most popular card games for mobile . It brings all the familiar atmosphere of anime and other games in the franchise. That's why, with so many characters, cards and ways to play, it's normal for you to be lost when you start the game. In order for you to have the best experience possible with Duel Links , we bring you some precious tips about the game . Much more than learning to build a good deck , this Yu-Gi-Oh brings you many gameplay and evolution options that you need to learn to get along.

1. Choose wisely between Yugi and Kaiba

The first choice of the game is in the first seconds of gameplay . And it is one of the most important that you will have to do. Choosing between Yugi and Kaiba will affect your gaming experience at least until you reach level 15. This is when the other character is unlocked so that you can play with her. We say this because most beginners choose their character based on the anime. Or out of sympathy for Kaiba or Yugi. The correct thing, however, is to think about the decks of each one. If you choose Yugi, for example, you will have the legendary Black Wizard and fiends and magic monsters . Kaiba, on the other hand, bets on dragons and other winged creatures. So it is interesting that you evaluate which type of cards you are most interested in or able to play. As they are two different decks , your style of play will end up shaping the cards you choose.

The first Yu-Gi-Oh games brought a game model that quickly consolidated itself: the Trading Card Game , better known as TCG. TCG, however, gave way to Duel Links to what we call Speed ??Duel . In other words: the idea is that the duels are faster, more intense, focusing on a loss due to loss of life points. TCG, for example, places duelists with 8,000 life points, while Speed ??Duel has brought those points in half since the battle began. The sizes of the decks are different too, with the TCG with 40 to 60 cards, and the Speed ??Duel with 20 to 30. The number of cards in the hand and in the field also differ. In the beginning you will certainly find these differences strange. So we recommend that you take the tutorial and go through all the explanatory phases of the game. Only with practice will you be able to get used to it.

Building the deck can be the most fun, as well as the most boring and difficult part of Duel Links . After all, there are hundreds of cards available, including spells, traps, skills and monsters. Choosing a combination of a maximum of 30 cards to have in a deck seems like a lot of work. And is! So planning the deck assembly is essential to not waste time. After a few initial duels in the game you will be able to see what types of creatures there are and which ones you like the most. As you battle legendary duelists like Joe, you will unlock your decks . Starting from an already established group of cards can be a good alternative. Anyway, this decision needs to be made early in the game. This will also define the boosters you will buy, so there is no point in spending money on cards you will not use. Think, plan and build a winning deck according to your style of play.

4. Don't waste your gems for nothing

This tip is closely linked to the tip above. The main purpose of gems in Duel Links is to allow you to acquire cards. Whether in the Shop or with the Merchant, you will need these precious stones. So don't waste them for nothing. If you are purchasing a booster , for example, find out about it before finalizing the purchase. Make sure your cards fit the purpose of your deck . The same goes for the Card Merchant. He has some of the rarest cards in the game, which is quite interesting. To trade with him, however, you need gems or gold. When purchasing a card with him, make sure that it is really necessary and indispensable in your deck . Buying a powerful but useless card in your dueling system is a big mistake. Also, be aware of the fact that it is possible to obtain gems for free at Duel Links . You can click on a gem find button , which will show you where to find them. There are well-known places, such as the Portal water source, the PvP arena lamp posts and the trash can at the Card Studio. Gems are not always available, but it is worth the try.

Of course, all Yu-Gi-Oh! Duel Links want to compete with each other to see that he is the great King of Duelists. But to reach the level of challenging other players , you need to train against the game's Artificial Intelligence. So you can get the basic mechanics of the duels, in addition to finding your style of play next to your deck .

6. Use your special skills

Most beginning Duel Links players are unaware of each character's special abilities. These skills are learned as you evolve in the game with a particular duelist, as well as from your duels. They are important, as they provide help in time of battle. Yami Yugi, for example, has his own skill set . At level 4 he acquires Power of the Dark , which, if activated, causes Yami to take over the field. As he evolves, other skills are added to his set . The fun is that you can learn unique skills from other duels when dueling with them.

7. Understand the moments of attacking and defending

Even if it doesn't look like it, Duel Links is a strategy game. Anyone who thinks that all they need to do in a duel is to reduce their opponent's hit points to zero. To get to victory you must try to anticipate what your opponent will do. This is even more important when he starts the game. Attack is not always the best defense. Sometimes simply putting a monster upside down is the best you can do. Especially if the opponent has a powerful monster in an offensive position or if he has some magic card or trap face down. Study your hand, study your opponent's field and plot your strategy. Don't try to think too many shifts ahead. Think about it now and try to find ways of not taking hit points. If this is done, you can try to attack the other duelist.

Unfortunately, many think that attacking in any way is the best tactic in Duel Links . Anyone who has seen the anime knows that an unsupported attack has a high chance of being repelled by spells and trap cards . So why not do the same on your side of the field? Magic cards are essential because they have several functions. It is possible to increase a creature's attack and defense points, for example, or prevent the opponent from attacking during "x" turns. Trap cards can destroy powerful monsters, repel direct attacks, among many other features. Giving up these cards is a big mistake that you can't make. So find some space on your deck for some of them. Choose them carefully, so that they are not alien to your dueling style.

The Duel Quiz can be one of the most annoying game modes in Duel Links , but it is one of the most important for those just starting out. As you will have to finish some of them in order to continue in the levels, nothing better than doing them all! As you progress through this game mode, you will gain some unique and useful cards for any deck . Block Attack is one of them, in addition to Banner of Courage and Remove trap . If you don't want to go all the way to win these three prizes, complete at least the 1-star Quiz Duel , which already gives you good experience and rewards.

10. Take your chances in PvP duels

Playing online against other players is the most fun part of Yu-Gi-Oh! Duel Links . But this experience is only pleasant when you have some experience in the game . There is no point in going to the Duel Arena if you are not prepared for it. So build a strong deck , with new cards in relation to the starting deck . This will be a huge advantage over beginners duelists. But if you want to face only players of your level, the tip is to engage in ranked duels. See how to improve your deck ! Find out which are the best decks for beginners !