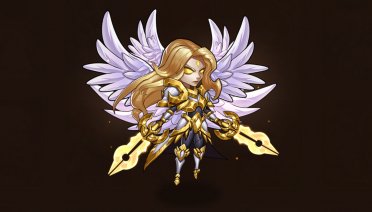 Order Restore: This is an Active skill that Aida has. This skill will deal armour-ignoring damage {128% of Attack} against some random enemies. It also will inflict a balance mark on all the enemies for a number of 3 rounds. {when the enemies with the balance mark casting active skills, they will be taking a 15% damage of self max HP from the attackers that are due. This caps at 3000% of Aida's attacks; it is not stackable.}

Fury of Justice: This is again a passive skill possessed by Aida. This will make the normal attack of Aida to turn into: It will deal damage {100% of the attack} against the enemy who has the most HP. It will also deal some extra damage by a factor of 10% of the max HP of the enemy in question. This will be capped at 1500% of the attack of Aida, and the self HP will be recovered by a margin of 15% of all the damage that has been dealt in the particular round.

Light of the Souls: This is yet another passive skill that the hero Aida has. Ti his particular skill deals a 100% of the enemies’ attack damage against the respective enemies. It also reduces all of the enemies’ healing effect that they have received by a factor of 5% and will also be able to recover the self by a margin of 5% of the maximum Health Points.

A Quick Guide to Aida

As discussed, this skill will be doing damage at the culmination of the particular round.

The damage in question will not be affected by the following:

Also, Aida can also heal herself to get the maximum HP. This can be boosted by the Belrain healing effect as well.

This will also reduce the healing effect of the enemy. This is on the enemy that will be having the red coloured icon which is similar to Belrain's healing boost.

But this will also result in most of the damage coming from the fraction of the 20% of the enemies’ maximum HP. So, Aida will be doing this maximum damage to the Health Points.

The active, as well as the second passive skill's maximum portion of the damage that Aida causes, will not be affected by the following:

The other thing that has to be noted is that Aida inflicts smart damage. This essentially means that After Aida deals the damage, a basic form of attack to the target with the highest HP, who is on the team of the opponent player.

Another thing is that whatever damage that Aida takes away, 35% of that damage and it will heal her immediately. This also does a lot of damage to the opponent. The majority of this said damage ignores the armour as well as the damage reduction.

Aida has a lot of speed, with this speed, Aida will be the fastest hero of the game of Idle Heroes.

This is an awesome ability by Aida; it is called the ignore armour. This will enable Aida to ignore all the opponent target that have very high armour ratings. Things like Sigmund, Warriors and so on. She does not care about any of that. She will be ignoring all of these things.

This cannot crit. This is affected by any quick damage and by any other modifiers that will boost attack skills such as Kroos, debuffs mark, Heart Watcher, Skill damage, weaken and so on and so forth.

Aida will also hit any four random number of enemies with that. This does not end here; Aida will also be hitting the entire team of the opponent. Mostly of whoever is still left alive. All of the six. She will not do any damage to the other two, but Aida will also  apply a balance mark for a number of three rounds. And this will not stack as well. This essentially means that if the player brings many Aidas' rather than a single one, as many people do, it will not stack. But it will end up refreshing. If Aida dies in the game, all of this will go away.

This basically means that when the opponent that you are playing against uses their enemies’ active skill, it will end up triggering and it will end up making them explode by inflicting a margin of 25% of the maximum HP of the opponent’s enemies. This will result in heroes like the Das Moge, Amuvor or basically any other hero that can change their actives to kill themselves.

Some other useful tips: