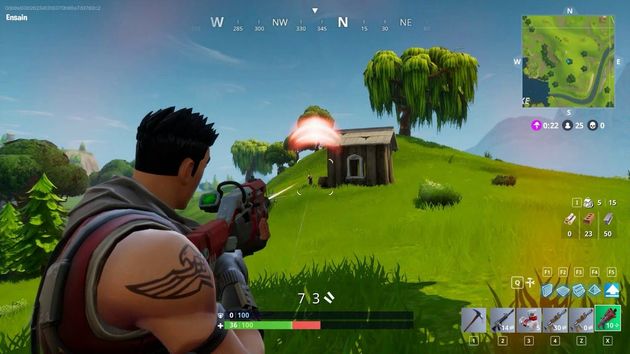 There is no doubt that Fortnite is the biggest phenomenon in battle royales. The game added to the genre the construction and material farm mechanics that are crucial to gameplay. Still, like any shooting game, aiming and shooting skills remain the most important aspect of the game. Thinking about the players who need to upgrade their skills, here are 6 ways to improve your aim in Fortnite!

1. Know the mechanics of shooting Fortnite

The mechanics of shooting in Fortnite are slightly different from what we are used to seeing in other games like PUBG, Counter Strike, CoD, etc. Therefore, it is not always possible to transfer skills from other games, which can catch many players off guard. The first step is to understand that not all weapons in the game obey the same rules. That's because, in Fortnite, there are two types of weapon mechanics: hitscan and projectile base . Hitscan is how all weapons in the game work, with the exception of snipers and explosives. Through this mechanic the shots have no travel time or fall, reaching the opponents immediately after the shot, regardless of the distance, as long as the shot is accurate, of course. Snipers and explosives are weapons based on physical projectiles (projectile based). It means that when you click, a projectile will come out of your weapon and travel to the target. Thus, whenever you use this type of weapon, you will need to take into account the distance and speed of the projectile to hit the shots, since they will take time to reach the target, in addition to losing height. It is in this context that you need to shoot a little ahead of your target, waiting for it to move and meet the shot. So don't confuse the two mechanics. Even at super long distance, if you are using an assault rifle, for example, never take travel time and bullet drop into account.

2. Understand what bloom is

Bloom is another Fortnite mechanic that differs from other shooting games. It consists of opening your crosshairs when you fire multiple shots in a row. It is similar to the Counter Strike recoil, but the difference is that in Fortnite the shots spread completely randomly within the crosshair area. Therefore, there is no way to master the spray of weapons, so the combat revolves around controlling and minimizing the size of the aim. The smaller the aim, the smaller the area that the shots can reach and the greater their accuracy. Crouching, standing still and shooting slowly gives your shots as much precision as possible, while running and shooting fast has the opposite effect. Some ways to deal with bloom are: Control your firing rate : in medium and long distance, avoid holding the mouse button as much as possible. The best way to play these situations is to make single controlled shots as quickly as possible. There is an ideal compromise between shooting quickly and accurately that you only get by clicking for each shot. Only then will you find the right rhythm. Accuracy of the first shot : Whenever possible, try to start combats while you are standing still. That's because, standing still, the first shot is always 100% accurate, so take the advantage and start moving. Shooting rate> Accuracy : in close range, know that you should be much less concerned with accuracy but with SHOOTING. Remember that when your opponent is close, many shots will still connect even if your aim is large. So, this is the right time to hold the button. Some weapons such as an aiming assault rifle and a thermal aiming assault rifle are not affected by the aim's bloom.

3. Use movement to adjust your aim

You don't always need to aim with the mouse. In various situations during combat your aim is at the right height and you only need to take a step or two to the side to adjust the aim. This tip is especially useful when you are aiming down (when you have high ground). Thus, the objective is to keep the mouse still as much as possible and try to mirror the opponent's movements to maintain the correct aim. That way you eliminate a very important factor, which is the sensitivity of the mouse.

4. Align your shots before leaving the cover

When you incorporate movement into your aiming setting, you unlock the option to align shots before leaving cover. Thus, the ideal way to use covers is to: identify your opponent's position> align the sights> peek and shoot> hide. Of course, there is always the chance that your opponent will have repositioned himself, but the more aligned the aim is, the smaller the necessary adjustment will be.

5. Pay attention to the aiming position

Finally something that can be brought in from other games. Aim positioning is a concept present in any FPS. According to him, you should always keep in mind the points on the screen where your opponents can appear, and leave the crosshairs there. Targeting positioning is somewhat more neglected in Fortnite due to construction mechanics that force players to maintain their targeting at various points on the screen. Pay attention to this and, always keep your aim pointed at a possible point of risk. Keeping an eye on sounds is crucial to help position the sights. The best way to improve your targeting position is to record your matches and watch them. You will notice the number of times you are not even building anything and your aim is pointed at useless points on the screen.

Tracking consists of "tracking" the target, firing as it moves. Tracking is present in basically all combats in the game, since most weapons work with hitscan mechanics (see item number 1 above). Playing with low sensitivity helps a lot when keeping your sights on moving targets. Flicks or flick shots are the famous “dragged by mouse”. That's when you reposition your aim extremely fast to connect shots at opponents who were far from your aiming position. Generally flicks are needed in frantic close-up combat when players are jumping, running and building as fast as possible. To train both techniques there is a fun method that can be done in Playground Mode. Use two bounces jumps away from each other and position an object to fall on top of one, so that it bounces from side to side. The method is not as effective as you would like, but it helps a lot, especially with tracking and for you to find the ideal sensitivity. Click here for more Fortnite tips and tutorials!