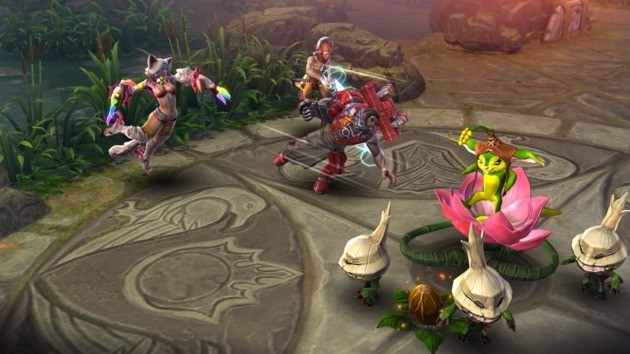 Vainglory is one of the most promising MOBA games for mobile and also one of the most competitive. The game has some mechanics that are different from other games in the genre and that may surprise players who think they already know everything about MOBAs. So you don't waste any time and start winning, check out these essential tips to master in Vainglory!

In any MOBA game you try, all heroes assume a specific role in the team. It is very important that you know what the role of the character you chose before the match is, to make it even better and to choose the items and talents appropriate for your goal. In Vainglory there are only three functions: See who are the best heroes in each Vainglory role!

In Vainglory, minions don't appear until the first minute of departure, so you don't have to leave for the lanes right away. So, gather your team and take the first minute to invade the enemy jungle and search for opponents alone. Obviously, be careful not to fall victim to the same strategy.

Regarding the waves of minions, Vaiglory has a crucial difference compared to other MOBAs: the Captain Minion. This special minion appears every four waves, replacing the siege minion. Whenever a Captain Minion is in the lane, your team's minions will take less damage than the rival team's minions and towers. This buff has a lot of impact on the balance of the lane, as, as with other MOBAs, it is not good that you advance in the lane in an uncontrolled way. For example: if you kill the opposing Captain Minion, your wave of minions must beat the opposing wave and advance in the lane. Thus, the next fight is likely to be under the reach of a rival tower, which gives the opponent team a lot of advantage, which will be able to farm much more easily. Therefore, your choice of whether or not to kill the Captain Minion depends on what you want to do in the lane. If you want to press the opponent with minions to get out of the lane for a while, then kill the Captain Minion. If you want to bring the fight to your tower, keep it alive as long as possible.

There are two rivers that run from the middle of the map towards the upper and lower lane. If you follow them in the right direction, your character will gain a very useful speed boost, enabling effective ganks or supports.

5. Improve your notion of map and communicate properly

Always, ALWAYS look at the minimap. A missing opponent is probably preparing a gank, so always be on the lookout for the best response. In addition, communicate as much as possible with the signaling tools that the game provides. Warn about missing opponents, opportunities for advancement, ask for help, etc.

6. Watch out for dragons

Watch out for the Ghost Wing and the Black Claw. The dragons appear on the map, respectively at 6 and 15 minutes and guarantee unique buffs for the team that defeats them. The Phantom Wing grants a barrier that regenerates life and energy when the hero is out of combat. Black Claw becomes your ally and advances along the middle path. It is important that your team has a view of dragons. So, keep Scout Cams in the region to see when the opposing team will attack them. At this point, you can challenge the dragon, trying to steal the kill for your team, or even take advantage of the opposing team's lifelessness and energy to kill everyone.

Vainglory has a guild search system that you can use to find players of the same level, or who play on the same days and times as you. This will make your evolution much easier, as it reduces the chances of you joining teams with trolls or people who leave in the middle of matches.

8. Train before playing as a team

Before entering public matches with other players, it is very important that you try out the heroes and mechanics of the game in practice matches or against bots. Since there are no other heroes to worry about, this is the ideal way to learn the skills of the chosen hero , his attack speed and the amount of damage done. Once you're familiar with the game and the heroes, it's time to join the other players.

9. Take care of your karma

Whenever you leave a game halfway through, the karma system will give you negative points . Therefore, avoid giving up, unless you have no other choice. Your karma will determine the glory points you receive as a reward, which can be used to buy new heroes and skins.

One of the characteristics that differentiates Vainglory from other games of the same genre, is the possibility of occupying mines to improve your minions with bonuses. While it is really useful to have access to stronger minions, it can make your enemies get rich quicker. This is because the stronger the minions, the more money they give when they die. So, consider the possibilities before running out to capture the mines.

11. Don't travel to the base if you can visit the jungle store

In Vainglory , you need to be close to a store in order to buy your items. Normally, the store is at its base, but after a certain point in the game, a store will also be released in the jungle . Don't waste your precious time teleporting to the base, as all the items available there are also accessible in the store in the center of the map.

12. The importance of the Kraken

If your departure reaches 15 minutes, a giant Kraken will leave the gold mine. This powerful minion can be captured to help your team destroy the opposing base. Its massive damage and high HP will greatly assist your team and may even decide the fate of the match. However, you have to be ready for the possibility of your enemies being able to eliminate the kraken and, consequently, gain a large amount of XP and gold . The online JavaScript compressor will definitely help you optimize your scripts for a faster page loading.