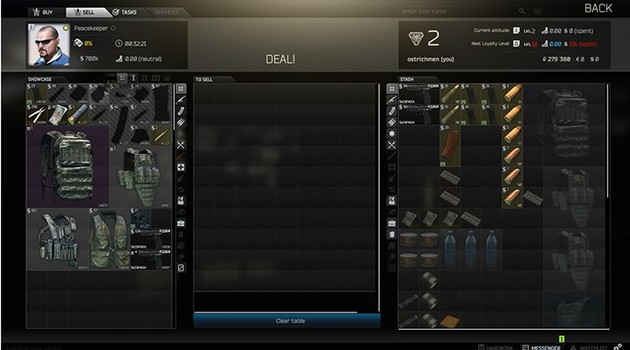 The story of Escape From Tarkov is still very incomplete, but it is worth remembering that the game is still in the testing phase. The game is highly realistic, with a new weapon and ballistics system very similar to Arma, but with a large part dedicated to the development of your character, as in an RPG. Find out more details about the game in our article.

What is Escape From Tarkov?

There is a war in the Norvinsk region, in the city of Tarkov. The player, after choosing the PMC, BEAR or SCAV faction, needs to escape the different areas of the city unscathed, within the time limit in each of the matches. You are randomly placed in a location on the map and need to reach the extraction zones. The USEC PMC (Private Military Contractor) Faction speaks English. The BEAR (Battle Encounter Assault Regiment) faction speaks Russian. In addition to these two enemy factions, there are players called SCAVS, which can be controlled by other players or by AI, that is, playing against the computer. The player starts the game with some basic equipment that needs to be very well managed. In the case of deciding for the SCAV faction, there is no need to choose the equipment with which to start the game, as this is randomly defined. Escape From Tarkov revolves around the loot. It is important to get the best loot possible within each match and this is only possible by searching the buildings, room by room, looking in each corner for ammunition, dressings, weapons, food and water. Well, besides being possible to be eliminated by shots, you can also get seriously hurt or dehydrate, dying of thirst. The player can keep the loot he can get if he can extract himself before time runs out. If you are eliminated, you will lose everything. Yes, you are reading well. If it is eliminated, you will lose everything you took to the map and did not put in your special container. In addition to the loot being important to winning matches, each player can sell or exchange loot to get the money, equipment or supplies they need from the lobby merchants. There are literally dozens of weapons, armor, helmets, supplies and accessories to choose from, as long as you have the funds. The game region is divided into different maps, each with its own problems and places where it is easy to ambush and be ambushed. They are extremely detailed areas, with loot-filled rooms, very dark places and blind spots, where there can be many dangers, but good rewards too.

Strengths of the game

Escape From Tarkov is an ultra realistic game. The weapons behave like real weapons and can be modified with dozens of accessories from optical sights, grips, butts, flashlights and many other extras that greatly improve their performance. The player can check if his weapon has ammunition by looking at the ejection chamber, a detail that does not exist in almost any game. The player can move in a variety of ways, lean, lean on surfaces and more. Here, running expends your energy and worsens your aim (because your heart is beating faster). Combat does not depend so much on aggressive movement, but on more controlled movements and speed in firing. If you're expecting a Battlefield or Call of Duty with more loot, forget it. The health and well-being of the player are also very important and are monitored in a very complete innovative system. Each part of the body can be hit and / or hurt, causing different effects on the player. For example, a shot in the legs slows down the player and creates extreme blood loss. A hit arm will cause the player to lose accuracy in the shot and take much longer to catch loot. Fortunately, there are many types of dressings and remedies to treat all of these problems. As the game goes on, the player gains more experience and manages to access more and more types of armor, weapons and equipment and, of course, survive for longer in combat.

Another original point of EFT is the way the player can manage the loot he takes. It can be equipped, exchanged or sold either by dealers controlled by the game itself or by real players, in a kind of market. After reaching the 5th rank, the player can already make his own offers in that market. It is possible to do some missions at the behest of the Traffickers. These are especially advantageous. as they allow you to increase your reputation. Having a higher Reputation reduces the cost of equipment, dressings and weapons, in addition to offering clearer goals to the player. In summary, Escape From Tarkov is still in a very early stage of what could be a great game. But the game is clearly trying to distance itself from other shooting titles, thanks to its innovative trading system and its realism. If you enjoy armed combat with rifles that sound and fire like real rifles, in a tension-filled environment, Escape From Tarkov may be what you are looking for. If you decide to buy the game, check out our beginner tips for Escape From Tarkov right away!