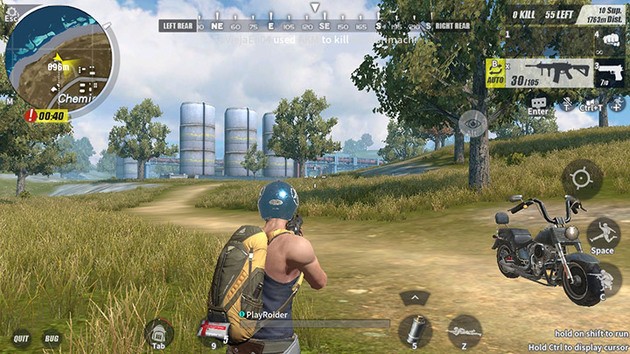 If your PC is more modest or older, this is no reason not to play Battle Royale. There are games that need good computers like Fortnite or PUBG, but there are others that run on a weak PC. We chose 10 cool Battle Royale that run on 2GB video cards and 2GB of RAM. Check out our choice of Battle Royale Weak PC games and the minimum requirements to survive to the end in style!

After the success of the mobile version, the makers of Rules of Survival decided to create a PC version. It is a root Battle Royale game. Each game has 120 players, there are a lot of weapons, vehicles and two huge maps. Plus, you can customize your character with cool clothes and props. In addition to solo modes, you can also play in teams in both Third Person mode and FP mode. Rules of Survival has a giant community, so you'll never miss players to trade shots with.

This game combines the well-known Battle Royale mechanics with the Fortnite constructions. The player can destroy any element in the game by successfully harnessing these features for their own buildings. The game is very colorful and with great graphics, as well as having a very varied weaponry, with high tech snipers and even flame throwers. Its build system makes the game a good Fortnite clone that can run on more modest computers and with a growing community.

A Rules of Survival-style Battle Royale, Knives Out is distinguished by its varied maps and different modes: there is classic battle and battle using vehicles, as well as a complete Arcade mode. The armament and extras are very varied, and you can even use a drone to watch your position for a while. There are many ways to customize your character and earn cosmetic items.

An intuitive, fast-paced Battle Royale with varied weaponry and a huge community, Free Fire is designed for the mobile market and runs on very modest smartphones. What are you doing on this list? Good question! Many players play Free Fire on their PC using an emulator for various reasons. This in no way diminishes the fun of playing and testing your skill against real players and climbing the ranks, with well-built characters and useful skills.

Survivor Royale has everything you would expect from a Battle Royale game. The PC version runs smooth even on more modest machines. The graphics are simple but well made. The game has a lot of different weaponry and two large, but not so large maps. Some vehicles make a big difference between winning or losing a match, as they are fast and heavily armed with heavy machine guns. The servers are located in Asia which can sometimes influence matches. There are many different modes like 50 Vs 50, Sniper, Vehicle Warfare, Zombie Mode and more.

The mobile version of the famous PC game is a real success, having been nominated for some awards. Using the developer-created emulator Tencent Gaming Buddy , you can have much of the experience of an original Battle Royale, with its true-to-life weaponry, three main maps, and even Arcade mode. Many players even think that patent progression and Arcade mode are much better in the mobile version than on the PC. There is also PUBG Mobile Lite, which can run on more modest systems with the same gameplay and weapons dynamics but only 50-player matches.

A game with a huge community, Warface has ways to please almost everyone, including players who prefer Battle Royale. The player is randomly cast on one of the maps, only armed with his trusty combat knife. This will be your only weapon until you get a better one. Use Warface's sliding moves to surprise your enemies and save your shots. This Warface mode doesn't have a lot of ammo, forcing players to think long and hard before shooting, but there are some drops and some boxes with scattered weapons. You cannot play Duo or Squad in this mode.

An original Battle Royale from above, Survivors is fluid and runs very well on modest computers. The game follows typical Battle Royale rules with short, action-packed matches. The viewing mode is very innovative, and the player can only observe what is in the cone of vision of your character. This requires some habituation to be effective. Unfortunately, it is not free.

With very simple controls and many cosmetic items to win, Mini Battlegrounds stands out from other Battle Royale games for its isometric view, known as "Top View". This detail makes the games super fun and full of strategy. The weaponry is varied and the game is always adding new weapons. A game used to PUBG will feel at home because the weaponry, extras, armor and helmets are very similar. The game is still in its early stages, which may result in some delay in pairing, but the community is growing.

The classic Crossfire decided to make a Battle Royale mode available. The player is launched from a helicopter with 49 more players, and from there, only one thing matters: survive. There are weapons familiar to any Crossfire player scattered around the map, as are bullet vests and bandages. The graphics aren't the best, but the game can be fun, although it's only possible to play solo.