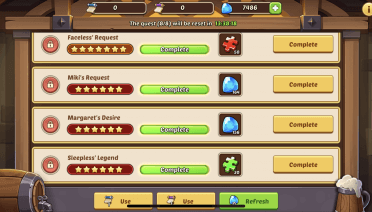 Overview of the Event currency.

The event which is newly released has a number of new currencies that have been introduced. Every one of these has a different method of getting them. Sometimes these methods overlap. It is a confusing task to keep it all remembered straight and is quite a daunting task. This guide will help the players to keep all of these in track and provide all the information in one single place.

There are primarily four different types of event currencies; these are:

Blessing bags: There is a F2P currency. You can get these by primarily spending some gems.

Confession roses are primarily obtained by spending some real world money. These are a light P2P type of currency.

Chinese Knots are primarily obtained by completing an event called the Heroic summon event. These are a form of event currency.

Fu is a type of event + p2p currency. They can be got primarily by also completing the event known as the Heroic summon event. But if you are aiming to get the top reward that is the Kiss of a ghost, an artefact, then you should be ready to spend some real world money.

The chests for the Chinese New Year event are the replacement to the standard gem boxes that are usually in the game. Each purchase will entitle you to an additional reward as well as one of the four currencies of the event.

Going on value, I would say,

For people playing in the P2P version of the Idle heroes game, there are two types of different event packages. One is geared towards the light spenders whereas the other is usually for the heavy spenders in the game, who are typically referred to as whales by the community.

There are two specific Chinese new year packages for the spenders who are considered as light value spenders:

The” value” standard packages are mainly for the players with tons of money in their pockets and are willing to spend them on the game. I recommend people not to buy this particular one unless and until you need the currency of the event to get a premium reward. My main argument is that the gem per dollar ratio of this pack is horrible. Every one of these packs can be bought for a maximum number of 5 times.

This is a very straight forward currency in the game of idle heroes. The number of ways to get this currency is also limited. Also, it has no interlinks or interactions with any of the other currencies in the event.

You will need 1600 points if you want to reach the top reward {which is a copy of Aspen}. This will require you to have at least 1333 bags. Every time that you will give a bag, you have about a 20% likelihood that you will receive 2 points instead of the usual 1.

You will be able to get an assured 920 bags (where 140 are free, and the rest 780 will be for gems). This means that you will need to get only about 420 bags from the auto loot drops in the time of 2 weeks which is not a big deal. It is my recommendation that you purchase the gem box with the 388 gems (x3) immediately and then relax till the last day in order to see how many more bags you will probably need to reach the top tier reward for this particular event. You can use the 666 box of gems as well as some direct purchases to make the balance.

If you are thinking about which hero to give which bag to, then this tabled comparison will help you. This contains the comparison of giving th e700 bags to a particular hero.

If you are considering a situation like Xia versus Emily, then the outcome would depend on what you value more, 3.5 number of Prophet orbs or the 1 more elite hero summon. Now, the prophet orbs have a considerably lower individual rate of return than the one elite summon. But, helping to complete the prophet orb events is also a very valuable thing. Lutz will be giving you more numbers of pure fodder, but this means that you will miss out on artifacts.

For new players, especially ones that will require more heroes as well as artifacts, my suggestion would be Emily > Xia > Lutz.

For the new players who require artifacts but they already have a good and solid roster, then I would say, Emily = Xia > Lutz.

For the players who have been playing the game for a long time now, {ones who already have a lot of artifacts} I would say that all of the three options are well balanced. You will get help on the prophet orbs from most of the fodders from Lutz. Also, the prophet orb from Xia, there is a chance at getting a usable copy of a hero from Emily.

If you want better details on who you should give bags to , then I recommend that you read this post here.

This is also another straight forward currency in the game. Confession roses are mainly obtained by spending some money. They can also be got by auto loot drops as well. This again has no interactions with any of the other currencies of the event.

The maximum number of confession roses that you can get is capped at 998, this if for the gem purchases. If you are aiming at getting the top reward {which is the withered armour}, then you will probably have to spend another 5 dollars on the Chinese New Year packages, this is unless you get very luck with the auto drops. The CNY event typically runs for two weeks and based on my auto loot drop rates [current one]. It would be a calculation that you can probably get the Cthugha copy; this is without spending any money.

The Fu and the Chinese knots are connected. Both in the method that you obtain these and also with what all you are able to buy with these. These are mainly got from finishing the event called the Heroic summon. The fu is supplemented from buying the value packs, and the knots are supplemented by the auto loop drops in the game.

You will not be able to obtain the Kiss of Ghost {a top tier artefact} unless and until you are going to spend at least 100 dollars on the package with the top value. But, you will be able to get the bonus Aida copy as a F2P by spending at least 1400 numbers of the heroic scrolls. Also, you can obtain the Aida skin as a F2P by spending a minimum of 400 number of heroic scrolls.

The Fu Is the limiting resource here. The knots in the game seem to be like a way to stop players from getting their hands on a bonus Aida copy {for the whales}. This can be substantiated by the act that if you are going to complete the event enough number of times to be able to get the Fu than you need to get any of the rewards at the top, then you will have enough number of the knots to buy whatever you want. If you are going to be spending 500 dollars on getting about 200 of the Fu, then you can be able to get the Kiss of Ghost easily, but at the same time, you will not be able to get an Aida copy because you will have run out of knots.

DR;TL: So what Should I as a player buy for the Chinese New Year event?

This guide was written by JConqistador.