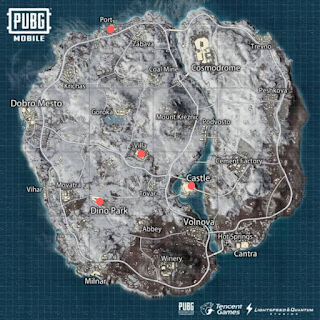 Put on a warm outfit and get ready! The new Playerunknown's Battlegrounds map is an icy island, full of snow, frozen lakes and lots of loot. His name is Vikendi. Check out our guide and discover the best places to loot, the riskiest places and the exclusive vehicles and armaments of this glacial map.

Vikendi is a middle ground between the huge maps of Erangel and Miramar with Sanhok, the little green hell, with 6x6 km of area. The creators decided to put the player in a new setting, full of snow, mountains and cities with a very European look, with walls, castles and even a theme park with dinosaurs. There is a strong tendency for there to be a lot of loot with SMGs (like the Micro-Uzi) and, fortunately, level 3 vests and helmets. There is also a general lack of Snipers or DMRs. At first glance, Vikendi has a good balance between very complex urban areas and forests, where coverage is low and movement is essential. The villages are also balanced in size, with no giant city like Los Leones in Miramar, for example, but smaller towns.

Situated in the middle of a river, with three bridges, this huge castle immediately catches the player's attention. It is probably one of the most dangerous spots on the map due to the large number of players that jump there. However, it has many good places to look and there is good loot, both in quantity and quality. There are different paths between the battlements, the towers and the roofs of the different structures of the castle and you can use them to gain an advantage. Get ready for a wild fight at close range.

To the northeast of Podvosto or west of Peshkova there is a "secret" cave on a hill. To enter the cave you need to break the doors with a vehicle (preferably a car or jeep) at high speed. The cave has two entrances and is full of high quality loot. It seems as far as the creators keep the drops before they go on the plane. Find out how to get to the secret cave!

In the northwest area of ??the map, you can see Goroka, a city located on the edge of a frozen lake. Goroka is also full of loot and, as you would expect, players too. The city is surrounded by walls and is situated on a hillside, limiting entry. Try to land on that same hill, using the higher ground for its good visibility. Goroka's buildings have many floors and balconies and the streets are cramped. Keep your finger on the trigger and proceed very carefully. Many players jump in Goroka, just like in the School in Erangel, so prepare to go out in glory or as a corpse.

An old abbey, in the south-west area of ??Vikendi, is a place full of loot of varying levels, but there is a high probability of good quality dressings and level 2 vests and helmets. parts of the cemetery mausoleums have even more loot. Check the graves as well. The only disadvantage of this place is to escape unscathed without being surprised. Just remember that the windows of the church cannot jump.

A coastal city with decent loot, but depending on the route of the plane, it can turn into intense shooting. It is important to land quickly on the roof of a house and enter through windows or balconies. The northernmost church is where there is the greatest chance of finding loot, as well as in the buildings surrounding the main square. To the east, crossing the road, there are some ruined buildings with a lot of good loot. If you don't want to get into a deadly fight as soon as you land, try starting there.

Probably the largest city in Vikendi, Volnova tends to attract many players, especially when the plane passes close or overhead. The city remains in the same style as the others, with narrow alleys, buildings with many windows and balconies. But it has the disadvantage of being much more labyrinthine, with the streets crowded with broken cars. Look for the bigger buildings to find the best loot. If you have to escape the Zone, it is much better to go around the city.

On the south side of the map there is a small spa and an abandoned hotel. There is good loot in the different houses and in the hotel, as well as easy access to the Castle (Castle) or the Cement Factory (Cement Factory), after being well armed and equipped. It is still an area with few players, but that will certainly change quickly. These two areas have different gaps, with houses and small houses placed along the slope. It is always best to start at the highest ground.

A huge complex, full of tall extraction towers, buildings, walkways and lots of loot. The best strategy for jumping on Cement is to avoid falling into large chimneys or towers and reaching central buildings quickly. There are some towers with different levels, which allows you to shoot enemies distracted from places that are difficult to detect.

A former space exploration center, Cosmodrome has a lot of loot, but it is well spread out and it takes a while for the player to catch it. However, the biggest surprise is the tunnels that exist beneath the complex, allowing a patient player or team to calmly loot without being surprised by snipers. Of course, there are other dangers in the tunnels ... The launch tower has several surprises, proceed with extreme caution.

In addition to the usual vehicles, Vikendi has a new addition: a snowmobile. The bike works well in the snow, but slides perfectly on the road, albeit much more slowly. It makes a lot of noise and uses a lot of fuel, at least in our experience with other PUBG vehicles. In addition to the bike, the game's creators put the G36C rifle in place of SCAR on that map. It is a weapon very similar to SCAR, although the rate of fire is higher, at first sight. It doesn't seem to be suitable for long-range shooting, even with extras, but the cadence of shooting at close range seems to work. Always remember that walking in the snow leaves trails. This is a very good detail when you are chasing someone, but it is not advantageous when you are the one being chased. Try to step out of the snow whenever possible or at least disguise your footprints. Believe me, it is not that difficult.