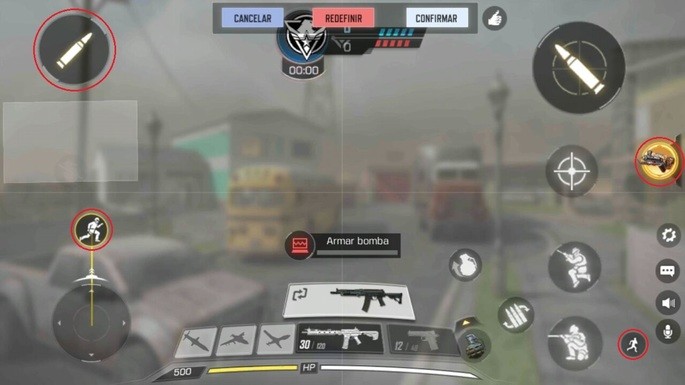 As with other shooting games, settings in Call of Duty Mobile play an essential role in player performance. So it is very important that you explore the settings menu as much as possible to see what works and what doesn't for you. For you who want to increase your level in Call of Duty Mobile, check below the best configuration to greatly improve your gameplay.

To access the control settings, click on the gear icon at the top of the main screen, access the "Controls" tab and choose "Custom Layout". We know that the control settings are very personal and each player prefers their own, but there are some fixed "rules" that will undoubtedly improve your game a lot, just get used to it:

Two firing buttons (with sight and without sight)

It is essential that you have two shooting buttons, one on each side of the screen. In the image above, note that on the right side is the aiming button and on the left is the aimless aim (hip fire). Believe me, you won't be playing at a high level until you implement both shots in your gameplay. The aiming shot will always be the main one and therefore it should be on the right side of the screen. It is what you will use in almost all situations. Hip fire is only used in super short distances where you don't have time to open the sights. It is usually used when you run into an opponent while running. At such times, it is crucial that you can attack as soon as possible. Opening the sights may be too late. We suggest that you place both shots in the upper corners of the screen so that you can use them with the index fingers of each hand. Consequently, you will need to change the minimap position.

Commands made easy for running

Facilitate the racing commands that are already configured by default in the game. First, drag the race button closer to the directional pad. So you need to slide your finger a lot less for your character to run. The minimum available distance is the one shown in the image above. Then, move the second race button (the smallest one, located near the minimap) to a more accessible position, and increase its size. That way you will have an option of immediate running.

The Operator Ability (the yellow icon in the image above) is not one of the most used commands during matches, so there is no need for you to maintain the giant size with which it is configured. Reduce it to the maximum to improve your field of view.

This is very important. Keep the shooting and squat buttons relatively far apart, so you need to use different fingers to use them. Only then will you be able to make advanced movements more efficiently, such as, for example, turning a corner by sliding and shooting. The secret is to run, slide with one finger and trigger the shot at the same time. If the buttons are too close, you won't be able to.

Use the claw position to play

Most players use the two finger position (first image above) to play. Although not the most suitable, it is enough to do well in most current shooting games. However, considering that Call of Duty Mobile requires a lot more movement than other titles like PUBG or Free Fire, you will need to use more fingers to improve your performance. Using the claw position you can perform all the advanced maneuvers of the game, such as shooting by sliding and jumping or easily switching between aiming or hip fire. Only then will your movements come out as efficiently as possible.

In the settings menu, in the "Audio and Graphics" tab you can edit the game's video settings. They also vary a lot depending on the cell phone, but still, there is important information that you should know.

We often think the game is running at peak fluidity, but it doesn't. To avoid this mistake, try to decrease the graphic quality (even if your device is very good) and start a game against bots to see what happens. If you notice a performance improvement, use this new setting. If you want to improve your gameplay, never prioritize the look. Regarding the frame rate, always try to make the maximum available, even if you need to decrease the graphics quality to a minimum. It is the frame rate that gives fluidity to the game's movements, and keeping it high allows you to control the crosshairs and bursts much more efficiently.

In the "Sensitivity" tab, you can configure all the movement speed settings on the screen. They are all extremely personal, but we also have some suggestions for them.

Call of Duty Mobile applies some fluctuations in sensitivity according to the speed at which you slide your finger across the screen. To turn these oscillations off, check the "Fixed Speed" field in the "Rotation Mode" section. This will always maintain the same sensitivity, even if you slide your finger with more or less speed. That way you will get used to the controls faster and have a more consistent movement.

Use Distance Acceleration if playing on tablets

In the same menu, you can activate the Distance acceleration option. The function is very suitable for players using tablets, as it will adjust the amount of movement according to larger screens, so that you do not have to slide your finger so much to move the crosshairs. You can also graduate this acceleration until you find the right spot for you.

Finally, make these adjustments to the general game settings, found in the "Basic" tab in the settings menu: Aiming assistant : turn it off. As you improve your gameplay, it gets in the way more than it helps. Quick grenade launch : hang up, otherwise you won't be able to "cook" the grenade. Tap to aim : it is the standard targeting option, and also the most effective. Show Left Firing Button : Select "On" to display the hip fire button, mentioned earlier in this article. Slide (when running) : Select the option "Touch squats while running" to have more efficient movement. Always Run : we do not suggest that you turn this option on, as you will no longer be able to walk. Instead of turning it on, use the control settings shown above in this article. Gyroscope : We suggest that you try to implement the gyroscope in your gameplay. In addition to being fun, it makes it much easier for you to make a few small aim adjustments at crucial moments, especially with snipers. Click here for more Call of Duty Mobile tips and tutorials!