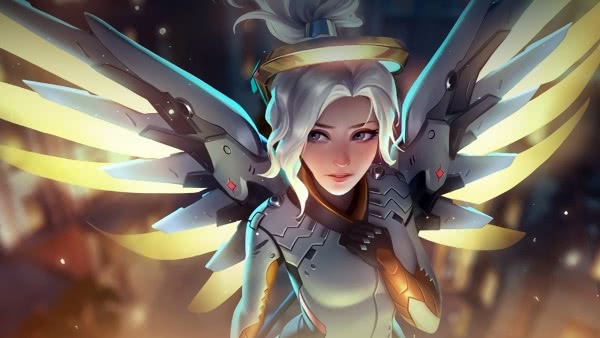 Mercy is a healer who can make a difference in battle. However, you need to learn to make some decisions at the right times. Check out this guide to learn how to master this Overwatch guardian angel!

Overwatch was attracted by Drª's expertise. Angela Ziegler as a pioneer in advances in the field of applied nanobiology. With the aim of saving lives on a large scale, she accepted the post of head of medical research for the organization , wearing the Valkyrie rapid-response armor on the front lines of battles. When Overwatch dissipated, Ziegler continued to dedicate himself to helping those affected by the war. She continues to help all innocents who were in danger.

Mercy's goal is to grant an advantage to her allies , either by healing or by increasing her damage. With her Caduceus Staff, she can heal her allies with one beam of light or increase her damage with another. Mercy also has the power to resurrect allies who die in battle, so he is one of the most powerful heroes in the game.

Mercy's goal is to keep her allies alive during the battle, however, it is not a good idea to sacrifice yourself to do so. When healing only one ally, it is important to consider whether it is worth putting yourself at risk. Think first if this ally is going to survive if you eventually die. If several allies are in need of your assistance at the same time, then you need to act in order of priority. Sometimes you will have to decide who is going to live and who is going to die . Try to understand what each ally's role is, its importance in the team and who can use any evasion or escape skills to save themselves. Regarding the new Resurrection, you must not immediately fly to the first dead ally. First calculate the dangers of moving and the chances of your ally being killed again. As for Valkyrie, it is important that you do not use this ability randomly, as this may result in your death - which means that the ability is wasted. It is important that you remain in a position at all times that allows Mercy to heal your allies, but also makes it difficult for your enemies to catch heroin . Usually, Mercy is at a disadvantage against the other heroes, so it is essential that you pay attention to enemies that have the role of catching you.

Your Caduceus Staff has two functions: to heal or increase the damage of your allies . It is very important that you give priority to the heroes who can make the most difference at the moment, bringing more advantage in the battle. A good strategy to safeguard your own life as well is to stay behind a wall , appearing and disappearing to launch your healing beam or increased damage.

You can't always wait for your allies to protect you, so it's important that you know how to use your Caduceus Disintegrator at the right times. In addition, while you shoot you are accelerating the reload of Valkyrie. Use the quietest moments to help destroy enemy shields and towers .

The use of Guardian Angel is quite simple, however, you need to know which is the best target for you to choose to fly . It is very important that your flight line does not place Mercy in the enemy's line of fire or close to danger.

There are two situations in which you can use Resurrection: In a safe situation, you just have to worry about issues related to strategy. If the enemy team has several main skills ready to be used or if your team is still regrouping, then it is best to save that ability for a more convenient time. In the situation where you know you are going to put yourself in danger to resurrect an ally, you should consider whether the risk is worth taking. Check if your team will gain an advantage with your sacrifice or if it is preferable to continue healing the survivors .

Valkyrie must be used at the center of the battle. Don't be afraid to use your Caduceus Disintegrator at this point as well, as infinite ammunition and increased firing speed are very powerful features to gain an advantage. It is usually useful for you to keep flying over your allies in order to have better visibility about the battle and you are also relatively safe. Even so, it is better to stay behind shields if you can. The online Word 2 HTML converter lets you transform Word documents to a clean code with just a few clicks.