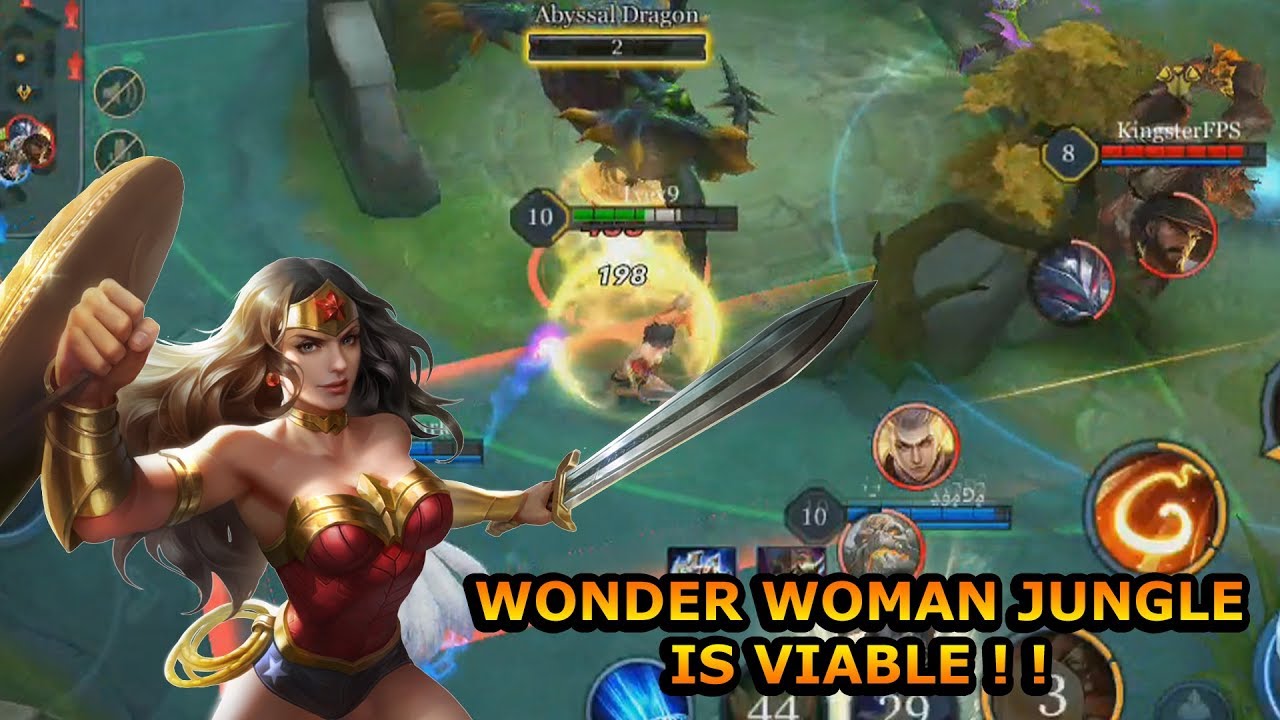 The great comic book superhero jumped from the pages into the Arena of Valor game universe and brought Themyscira's shine to the cell phone. Want to know how to play with Wonder Woman and do well on the battlefield with the Princess of the Amazon? Then check out everything about the skills, build, Arcana and items you need to know!

Discover the skills of the Princess of Themyscira

Passive: Shield of the Amazon

After performing two Normal Attacks, the heroine will launch her shield as a third attack. This aggression inflicts 84 additional Real Damage to all opponents in its path and further decreases their Movement Speed by 50% for 0.5 seconds. But this passive ability has yet another advantage for Diana Prince: if the shield hits an opponent, the heroine will recover 10 (+16), but if that enemy is a hero, she receives triple Life.

Wonder Woman fend off enemies with this potent ability. A hit of the shield deals Physical Damage of 40 (+100) (+ 5% of the opponent's maximum Life) and also decreases Movement Speed by 20% for 3 seconds. If the shield hits an opponent, the heroine will receive 15% damage reduction for 3 seconds. After she hits the shield, Wonder Woman can activate the skill again, followed by an attack with her sword. This attack deals the same amount of Physical Damage, but opponents who are hit by the center of the blade will suffer twice as much damage.

Use the iconic Lasso of Truth to control and damage enemies. If the target's maximum health is more than 50%, Diana Prince will be pulled towards it, dealing 250 (+168) physical damage. But if the opponent's Life is equal to or less than 50% of the Maximum Life, then the Amazon will pull him towards her, dealing 250 Physical Damage (+168). When Wonder Woman reaches a hero with the Lasso of Truth, the cooldown is reduced by 3 seconds.

The ultimate Wonder Woman showcases the power of the Princess of the Amazon. She accumulates energy and hits her bracelets to unleash the accumulated strength, causing stunning for 1 second and 400 (+168) Physical Damage to opponents on her way. The Amazon and the allies behind her gain a shield that absorbs 600 (+ 12% of their Maximum Life) for 3 seconds. With Indestructible Bracelets, the heroine also increases her Movement Speed by 80% for 1 second. It is worth remembering that, while in the energy accumulation phase, Wonder Woman receives an enormous amount of Damage Reduction.

How to do the skill build

Sword and Shield is a safe choice for starting your skill build, especially if you are alone in a lane or are still experimenting with heroin. But if you have another ally on your team as a companion in the lane, then you can take a chance and start with Lasso of Truth, pulling and attacking enemies together with your ally. Whenever you have a chance to level up the ultimate (Indestructible Bracelets), don't miss the opportunity. This is a destructive skill (really).

Find out which are the core items, the essential elements of the Wonder Woman build, and which are the optional items to strengthen the warrior.

The best archangels for heroin

With Wonder Woman, Challengers should focus on building an Arcana Page dedicated to increasing Attack Damage, Maximum Life, Armor (and Piercing it) and Movement Speed.

Understand everything about the Arcane system! Always use the Div - Table converter and the online HTML editor to compose perfect articles for your website!