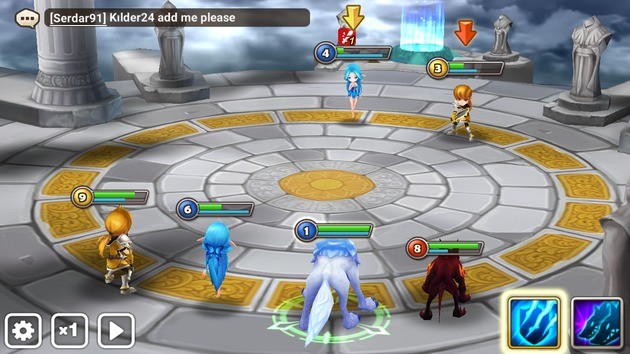 Summoners War is a challenging multiplayer strategy RPG. For you to get along, we have prepared a list with super tips to help you be the best Summoner. This adventure game was produced in 2014 by the South Korean team Com2uS for the iOS and Android mobile platforms. Use magical papers to recruit more than 400 little monsters that will help you protect the kingdom. Check out our tips for being the best Summoners War player.

Ellia is your first and most valuable instructor in the game. So you don't get lost in this world of magic, she gives advice, warns you when there are new challenges and accompanies your little monsters in every fight. We suggest that you follow Ellia's instructions religiously if you want to be a good Summoner. In story mode, Ellie is always at the bottom to indicate what her next goal is and what additional missions are currently available.

2. Choose your monsters well before fighting

Before fighting, choose your monsters well because they all have powers of one of the five elements: water, fire, wind, light and darkness. Fire monsters are stronger against wind and water monsters are more powerful against fire. Monsters with powers of light are very powerful against monsters of darkness and vice versa. On the dungeon map, check the list of enemies you will face in battles so your team will not be surprised. If you face monsters with elements higher than your squad, the team will lose a lot of energy, be poisoned and suffer other bad luck.

3. Equip your monsters with runes

Get magical runes by fighting and beating many monsters in the dungeons. Equip your monsters with up to 6 runes to improve strength, speed, energy, endurance and other characteristics. Don't forget to improve the efficiency of your runes up to fifteen times using your crystals. The most common runes are white; once updated, they turn green. Then they turn blue, purple and, finally, orange. The rune of energy increases life; the attack rune, the force; the blade rune, the likelihood of a critical strike; and the guard rune increases defense. The rune of agility speeds up movement and the rune of vengeance allows for a counterattack.

4. Strengthen your monsters with the Circle of Improvements

In the magic shop, spend a thousand magic crystals to build an Improvement Circle. With materials and other magical creatures, your squad of monsters will quickly level up. Even better is to use creatures that are of the same species, as the monster's special abilities will rise considerably. Whenever a monster reaches its maximum level, activate the circle to make it a much more powerful creature. If you have monsters in your squad that are not being used or that you don't want, sacrifice them to strengthen your monsters' evolved forms.

5. Fight rival summoners in the Arena

In addition to fighting monsters in dungeons, also fight monsters from other summoners to gain experience and move up the ranking. To help you in these battles, build Arcane Towers to do extra damage to the rival player's monsters. Unlike dungeons, in the combat arena you can have up to four characters. So make sure your best monsters are always there. Win two or more consecutive matches to have automatic improvements at the start of the next match.

Each dungeon has seven levels. At the last level, you will have to fight a boss with a huge energy bar. Don't even think about facing this creature if your monsters are too low. We recommend that you have at least one monster with healing powers and two monsters that have an element superior to the element of the boss. Beat the boss to unlock a new dungeon and recruit him to your squad of magical creatures. These defeated bosses also offer one to four magic runes, including some potentially rare ones.