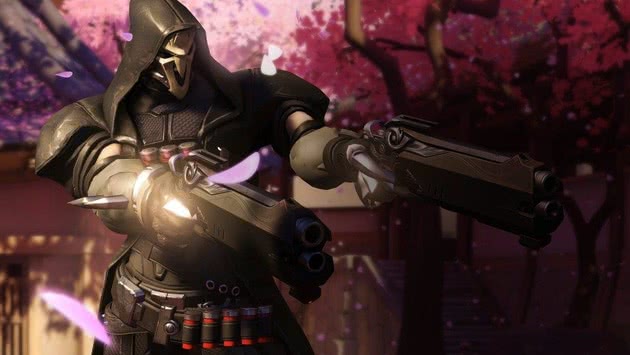 Reaper is one of the most radical heroes in Overwatch , mainly due to his powerful shotguns and his mask. In addition, Reaper is also known for its ability to cause great damage. If you like the idea of playing a character that goes unnoticed and still detonates enemies, then choose this hero. Check out this guide to find out the best way to use shadows to your advantage!

Reaper is an unapologetic mercenary, responsible for terrorist attacks worldwide. In the past few decades, he has fought in several armed conflicts and the survivors describe him as a black shadow, wandering like a ghost across the battlefields. There is a theory that Reaper is the result of a failure in a genetic experiment and that his cells degenerate and regenerate at an ultra accelerated speed. Right now, Reaper is part of the terrorist organization Talon, hunting and eliminating Overwatch agents.

Reaper is a hero capable of inflicting a massive amount of damage on enemies, but you have to learn to play strategically with him. He is a useful character if used to get close to enemy defenses and, for that, it is necessary to know the maps well. In addition, he is a hero with some survivability. If things are getting complicated for you, Reaper manages to escape quickly using Ghost Form. In addition, you can use Shadow Steps to flank your enemies.

Reaper is a character that is only effective if you attack at close range, so if you don’t have your Shadow Form available, be careful when fighting other similar heroes like Roadhog. Never forget that, although Reaper is resilient, he is not a tank . To be able to use his shotguns effectively, Reaper needs to stay close to his targets and, for that, you can count on the help of Steps of Shadows, to position yourself in the best possible way. If you get in trouble, Phantom Form can also help by making you invulnerable for 3 seconds . This can also be used to maintain your presence at one point while waiting for the rest of your team. Reaper is fundamentally designed to fight illusively. This, together with the fact that his damage over medium and long distances is weak, makes jumping into the middle of the battle not a good idea. Instead, the ideal is to use your Shadow Steps to reach enemy lines of defense and sniper hiding places .

All the damage done by Reaper comes from his two shotguns. But, each of these hand cannons is only fully effective when used close to the enemy . That is, you have to attack closely to be successful. Another feature that contributes a lot to Reaper's style is the fact that he does not reload his shotguns. Just drop them on the floor and pick up two new ones!

Phantom Form is the ability that makes Reaper temporarily invulnerable, also increasing his speed slightly. But, while under your influence, you are unable to attack or reload your weapons. When used well, this ability will allow you to traverse open spaces without taking damage or to return to a safe position during a fight. In fact, Phantom Form lasts only 3 seconds and will not make you escape safely from your enemies. Then use this ability to escape only certain crucial skills that enemies throw at you or to pick up Soul Globes or Life Packs.

Although Reaper has two powerful shotguns, it is necessary for you to get close to the enemy to use them effectively. That's where Passos das Sombras comes into the picture. With this ability, you can teleport to the location of your choice . If you know the map well, this will become a great advantage when you want to overcome enemy lines of defense. Shadow Steps is also used to position yourself behind your enemy, taking him by surprise. It is important to be careful when using this ability, as the location where you are going to suggest will be marked while you teleport. This means that enemies may be able to see your final location if you are not out of sight.

Blossoming of Death has a reputation for being one of the most deadly skills in the game . But you have to know how to use it in a way that takes your opponents by surprise. When he uses it, Reaper starts to spin in the same spot, shooting in all directions and killing whoever is nearby. Choose the right moment and you can even eliminate the entire rival team. However, if you simply run towards your enemies and use Blossoming Death, they will be able to escape in time. What you need is to use a tactic that doesn't give them time to escape, such as jumping off a roof or using it in conjunction with your allies' other skills . Beautify CSS files are essential for an optimized website. Free online tool by HTML Cleaner.