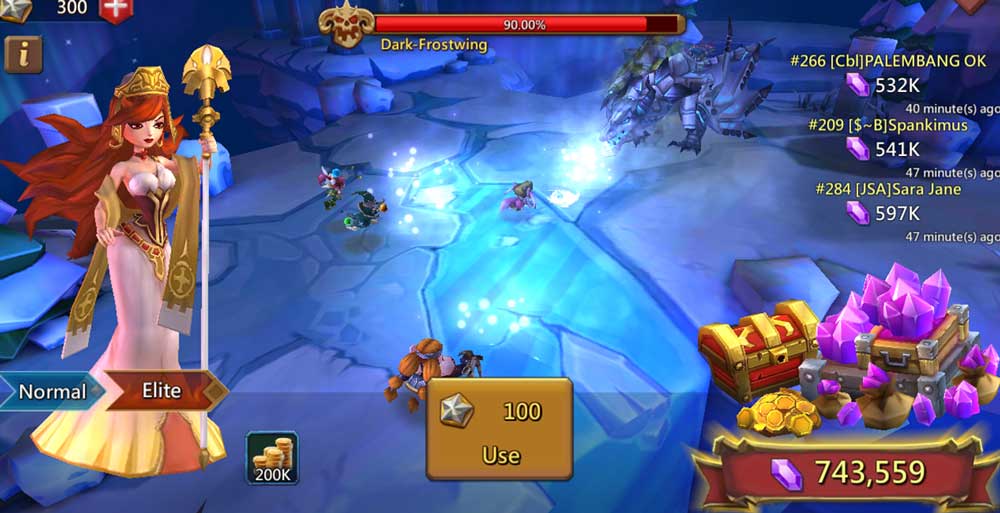 Lords Mobile works in the same way as other mobile games of the strategy genre in many ways. One of them is the presence of special and rare items that normally can only be obtained through payment. This payment can be made using the game's own money, as well as real money. This is the case with the Sacred Stars. All players on Lords Mobile wish to own Holy Stars. In fact, many are willing to spend fortunes on these items! If you are just starting to play this game and are a little confused as to what the Holy Stars are and what their purpose is, don't stress. In this article we bring you everything you need to know about these special items.

It all starts with the Labyrinth. It is an area of the map that was introduced on January 24, 2017, in an update to Lords Mobile . It can only be released after winning Battle 8, in English known as Skirmish 8. Once in the Labyrinth, you have two difficulties: Normal and Elite. Elite, however, is only released if you spend in real money with a gold bonus package. Inside the Labyrinth you will encounter monsters. The most common of these is the Dark Frostwing, while the rarest, which is like a boss , is called a Gem Gremlin. Your mission is to be able to attack these creatures. And that is where the Holy Stars come into play, as monsters only take damage if you attack them with Holy Stars . The problem is that it takes a very high number of Sacred Stars to be able to hit a monster. On Normal difficulty, for example, it takes 100 Stars to hit . In Elite difficulty, a hit is equal to 1000 Holy Stars spent. Each hit guarantees the player a reward, which is usually resources, although it can be Brave Hearts. If the monster was attacked on Elite difficulty, the prize is 11 times higher. What really matters is that you defeat one of the creatures for good. Dark Frostwing needs to be hit 10 times to be won, which, doing the calculations, makes you have to spend 1000 Sacred Stars on Normal difficulty. Imagine, then, how much you will spend if you go to Elite. Gem Gremlin, however, is the main target for players. It is not known how many attacks are needed to beat him, other than the fact that he will eventually escape the fight. What is known is that defeating him gives the winner an absurd jackpot . Just one hit on a Gem Gremlin, for you to have an idea, already guarantees 300 to 500 gems. There are also special events within the Labyrinth, which guarantee even bigger prizes, many of them being rare items!

How to get the Sacred Stars?

The Brazilian Lords Mobile Facebook page explained that it is possible to obtain Sacred Stars by defeating monsters, although it did not specify which monsters. Thus, the most guaranteed way to obtain your Holy Stars is by purchasing them in-game. Yes: if you want the big jackpot , you have to invest. Ten Sacred Stars, for example, cost 30 gems. If you want 10,000 of these items, the cost rises to 20,000 gems. You can also purchase special packages at the store, which comes with both gems and Sacred Stars. Although it is the most "cheap" way to purchase these items, it is still expensive. In that sense, you might be better off avoiding the Labyrinth. The Sacred Stars are the most coveted items in the game. As they are the only way to obtain a jackpot , it is clear that it will require the player to do internal microtransactions in Lords Mobile . Therefore, it is necessary to think about whether it is really worth investing time, gems and real money in the Labyrinth. The Holy Stars are part of a system very similar to a casino gambling system. In other words: there are many attempts, but very few victories. Try to see on your map how many players have already won the jackpot , as they are identified with a mark. You will see that there are very few of them, and without great monetary power you are unlikely to be one of them.