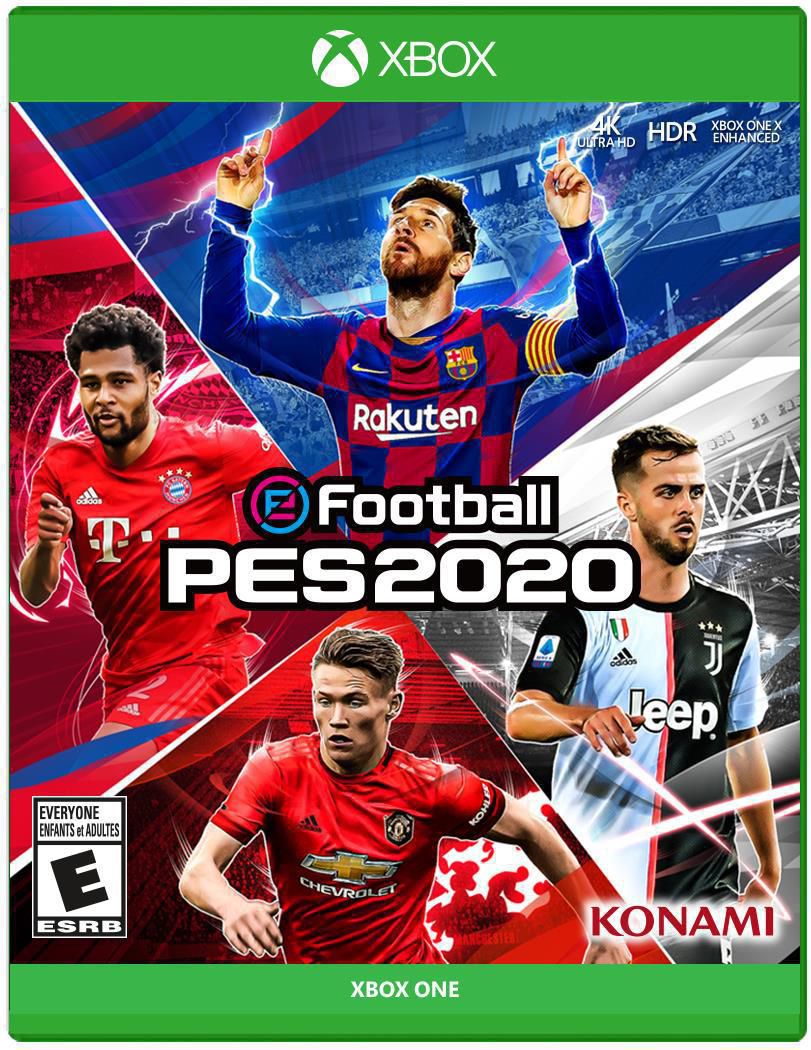 The PES 2020 eFootball demo arrived and we were finally able to check out how the new edition of Pro Evolution Soccer is doing. And right away we can advance an unquestionable fact: this is perhaps the best version of the game ever made. From the super realistic look of the stadiums and the players to the fluid and competitive gameplay we have a game that promises to fight hard with the competition this year. So if you haven't decided whether to go with Konami or EA next season, read our review of the PES 2020 demo . Know all the positives and negatives of the game and what we can expect from its final version.

In the latest editions of PES, the game was either very slow or very fast. Now, from what we could see in the demo, it seems that the franchise has found a balance. PES 2020 is fluid, intense, but without seeming to be constantly accelerating. We can even set the pace and stop the ball a bit to think about the next move. You can see that there is now a transition between all sectors of the team, even when we make a long launch. We also noticed that your team's artificial intelligence responds well during offensive movements. Several times the teammates presented themselves in several pass options, allowing greater creativity in creating the plays. This was very visible when we left behind with Felipe Melo, for example, and the left winger and center forward tried to open the defense for other midfielders to enter the area. All at the same time, in a coordinated and well-trained way.

Dribbling has never been so much fun

This fluid and balanced rhythm, added to the new dribbling system, makes PES 2020 a game with more options for attackers. The so-called finesse dribble allows you to pass through one, two, three players just using the right stick in the right directions. Other than that, there are a lot of dribbles that, if done well, leave opponent defenders on the ground. The new dribbling system is even more fun when you control players like Messi and Cristiano Ronaldo. The way the stars behave on the pitch is identical to real life. The Barcelona striker sticks the ball to his foot and seems unable to lose it. CR7, on the other hand, demonstrates all its speed, power and precision when running. Using and abusing the same player, however, is something to be punished in PES 2020 . The defensive system in this edition is more intelligent at this point, since defenders begin to more aggressively mark those players most used by the opponent.

Passing and shooting on goal requires skill - yours and the players

Two points in the PES 2020 demo demonstrated that Konami is investing in more realistic gameplay: it is not just any player who knows how to pass the ball, nor is it any player who knows how to kick on goal efficiently. This does not mean that games always end in 0-0, but that more skilled players find it easier to score goals. So don't expect to swing the midfield nets and any player. Mainly because there is almost a manual control of the direction the ball takes after a shot. As for the pass, the same idea holds true: more skilled players will pass the ball better than those less skilled. As with kicks, you need to train your passes. Finding the timing of the assist, as well as your strength and direction, will require you to master the commands.

The defensive system is smarter, but still leaves loopholes

As we said earlier, the opponent marks more of that player that you use more often. That alone would be a big improvement in the defensive part of PES. But overall, the game's defensive artificial intelligence is really smart. From attackers to defenders there is a consistency that we haven't seen in a franchise game yet. All players seem to understand their role on the pitch and seek to do this with utmost perfection. Likewise, in PES 2020 we could see that the defense duo is more "combined". We don't see defenders running to opposite sides, leaving that corridor for the opponent to advance. Open spaces are more closed, and even when they open, goalkeepers are much more agile and well positioned to avoid a goal.

He ran to the bottom line, crossed to the middle of the area and ... goal!

In the early days of the franchise one of the easiest goals to score was to run to the bottom line, cross to the wide area and head to the back of the net. And that is back in PES 2020 . If the defense is now more positioned to avoid infiltration through the center of the field, it opened breaches on the sides. This is something that we could see in every game we played in the demo. This may be corrected in the final version, but it seems that Konami's intention is really a return to the origins.

The strength of PES 2020 is undoubtedly the Brazilian teams, for several reasons. The first and the most striking is the look of the athletes. All five Brazilian clubs available in the demo have their athletes faithfully portrayed in the game. It's really fun to make a classic Corinthians and São Paulo and have the entire squad visually perfect! Konami is making an absurd effort to have the maximum number of licensed Brasileirão clubs and players. This means that in addition to the athletes' visuals, we have an atmosphere on the pitches very close to reality. Playing at Allianz Parque, controlling Palmeiras, is exciting. The crowd sings, reacts to each loss or steal of the ball and explodes in each goal scored.

Brasileirão will be "caught" in PES 2020

Both Series A and Series B of the Brazilian Championship are fully licensed in PES 2020 . This means that we can make almost any classics we want. For those who like to play with their team of hearts, this version of the game will be perfect. One must be aware of the fact that playing with Brazilian teams is different from playing with a team like Arsenal or Barcelona. The games between the "BRs" are more "caught", truncated, slow. It is common for few goals to come or for the score to be zero. For some this may be a negative point, but we believe it portrays a lot of what Brazilian football is. There are more wrong passes, crooked kicks, yellow cards and decided games in an unexpected situation. Even the defense's behavior is more uncertain when we choose to play with a Brazilian team.

Just analyzing the game demonstration, it is not possible to give a verdict. Even so, it is possible to notice some specific improvements in terms of gameplay, which place eFootball PES 2020 as one of the best editions of the game. We can therefore expect a game that will require players to work hard to build their moves. This is positive, as it makes everything more realistic. PES 2020's paced and thoughtful football makes matches more exciting and unpredictable. Dribbling remains difficult, although dribble finesse comes to give an extra weapon to those who attack. Combining this with a much better defense compared to previous versions, we will have epic duels between defenders and attackers. And we cannot fail to mention that the goalkeepers' artificial intelligence seems to have been improved. Finally, a new camera was added, which simulates a TV broadcast. Playing from this perspective causes the ball or even a player to be in control to lose sight of the ball. This new dynamic is challenging and can also be a positive point.

One of Konami's biggest difficulties has been offering PES players a minimally satisfying online matchmaking . Even though thousands of players try to find an opponent to face, they cannot. In the demo of PES 2020 tried for several minutes to enter in a friendly online . We didn't make it. We chose Brazilian, Argentine and European clubs, but in no way did we manage to have a match. We don't know if this problem will persist in the full version or if it was just a technical failure of the demo . This, for many players in doubt, can be a turning point when buying PES 2020 or not .

Redesigned Master League, legendary players and Brasileirão can be an asset

Konami has some hits that can attract more players to your game. The revamped Master League, with the presence of names like Maradona, can win new players for this new edition of PES . That and the presence of legendary players, like Ronaldinho Gaúcho, David Beckham and Oliven Kahn, can be an asset. But of course the big bet of PES 2020 is in the presence of 40 Brazilian teams in the game. It remains to be seen whether all of them will be fully licensed, with stadiums and uniforms, but mainly with real rosters. Everyone present in the demo is impeccable in that regard. Graphically, we still have a game with a beautiful and smooth look. The lighting of the stadiums and the texture of the lawns make it appear in certain perspectives that we are even watching a real broadcast. Anyway: eFootball 2020 seems to be a very promising game. There is no denying that the small sample of the demo convinces and makes you want to keep playing more and more. It remains to be seen whether the full game will have enough stamina and resources to attract and keep the attention of current and new players in the franchise. Check out all licensed PES 2020 Brazilian teams ! Know which leagues and stadiums will be present in the game! The HTML CheatSheet has its built-in editor where you can preview the document you are working on.