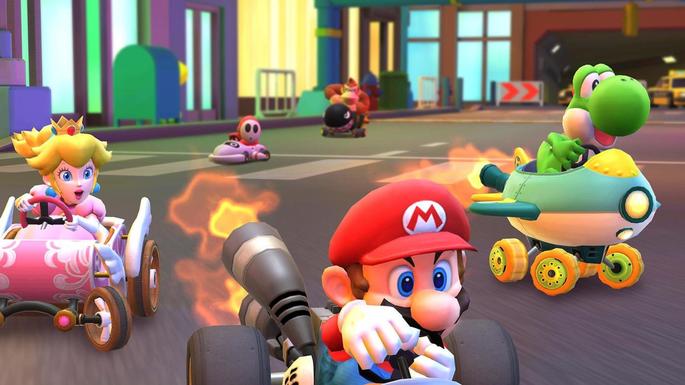 Mario Kart Tour has finally arrived on smartphones ! It is the first official game in the Nintendo car franchise for mobile phones. Available for Android and iOS devices, the game is entirely free. We've already tested it from top to bottom and prepared this Review to let you know everything the title offers to fans!

Mario Kart Tour is very similar to the classic games of the franchise. Mainly in the idea of the title, the characters and the gameplay . For a fan of Nintendo karts and even the Mario universe in general, the title is a good fan service , but in some ways it seems like it was released at the wrong time. The game is good, far from it. Does he have fun? Also! But the cell mechanics look a little old school . It is as if the game could have been released some 5 years ago. Mainly because there are several indie car games today for smartphones with much more fluid mechanics and controls. We realized this early on. You are invited to choose how you will control the car: manually or with assisted control. And we already told you: regardless of what you choose, it won't change much. The direction will always be locked, especially when making the turns. This may be because the player is forced to do drifts . The drifts give turbo, which allows the player to gain more speed than the opponents. Anyway, the steering mechanics leaves a lot to be desired. It looks like Nintendo took a mold 5 years ago to do the Mario Kart Tour . The absence of buttons on the screen, as is usual in games of the genre, makes gameplay difficult . In addition, there is noticeably a delay between turning the car to the side and this actually happening in the game.

Step deep, but without accelerating

This whole problem in steering mechanics is not just limited to the locked control of the car. In Mario Kart Tour you cannot accelerate or brake. Basically, it's driving the car, making the turns, picking up the powers and trying to get there first. This greatly limits the players' experience. It makes racing less dynamic, although not always predictable. Everything will depend on who gets the best powers and the mastery of the curves by the players. The lack of acceleration and braking can be a positive point for some. Playing racing titles on your phone is something that can confuse some, since the controls are not always clear. Despite controlling the car from left to right and vice versa can make it easier for those who are less experienced. Nintendo even allows you to use an accelerometer. This option is hidden in the settings. But it only makes the controls more difficult.

Game is friend and does not punish players

By nature, Mario Kart is a very punitive game. Anyone who has played this title since the early days of Nintendo knows that it makes players very angry. But the Tour is very friendly, which makes up for the problematic driving mechanics. You do not literally get off the track, as there is an invisible barrier that keeps you on the road. Even when you hit a pipe or other object on the track, the lost speed is not much. In fact, sometimes it even drives players forward. Water racing case.

Nintendo followed the wave of current games and made the Mario Kart Tour experience entirely online . Not a " single " mode , where you just play AI alone. But that is not bad, since the matchmaking system is very fast. You don't even have 10 seconds to enter a match. This matchmaking , however, is misleading. The game makes you believe that you are playing against other users, but they are actually bots . This can be verified after a few races, in which it is noticed that the level of the opponents is quite low. There is still no option to play only against friends, sharing your mobile screen or against any real player. Perhaps in future updates Nintendo will include these features. As for the lags , don't worry. We tested the game on a Huawey P8 Lite, using both 4G and WiFi and had no connection problems. Furthermore, the game is light, which does not compromise the experience in that sense.

As we said above, Mario Kart Tour is a fan service of the good guys! There are several characters available in the game today, and we already know that others will be added in the future. Now you can play with: Added in Season Two: In our article on the characters from the Mario Kart Tour you can see the rarity of each corridor, and know which ones will be at the game from updates. Something that Nintendo kept in this game in relation to the previous ones is the differentiation between the characters. Each has its own skills. Toad, for example, when he wins a mushroom, can use it 3 times. Bowser gets a special hull, which is his own hull, and so it goes with each runner. There is a very cool system of character and item evolution. The more you run with a certain racer, the more he will evolve, as will the gliders and cars you have. The best thing about it is that you don't have to pay to evolve anything, being, in that sense, entirely free to play .

Cups and seasons streamline the game

From what we have noticed, Mario Kart Tour will be constantly updated with new competitions. They are divided into seasons, which restart every two days. In each season there are cups, which take place on different tracks and have different levels. You win prizes as you win cups and seasons. You need to collect x number of stars to unlock new levels. At the end of each cup, there is a specific challenge to be met. We feel that as the cups are won, the level of difficulty of the tracks and challenges increases. This is positive, as it keeps players focused and interested in continuing to test their limits. When you reach a certain level of play, you can compete in the Weekly League. The more points you make per week, the better the more prizes you win. Be it coins or rubies, used to unlock new gliders, cars and characters. In addition, after completing 7 hearts you have access to the challenges. These challenges are things you must do within the races. One of the most difficult is the "Eliminate 3 pipes". If you have difficulty with this, see our tutorial to destroy 3 pipes .

Obviously, Mario Kart Tour could not fail to have microtransactions. But that's okay, because you don't need them for anything in the game. Rubies, the game's main currency, serve for a loot box system . You boost a win for 5 rubies and you can win characters, gliders or cars. The same rubies can be used to participate in Coin Fever. In it you will control the Golden Mario in a track full of coins. That Mario attracts the coins to you. In the end the game multiplies the coins. You can multiply by up to 10x! Coins are used to buy characters, cars and gliders that are on sale in the Game Store. These coins are also earned over the course of the races.

Verdict: Is Mario Kart Tour worth it?

Worth a lot! Despite the problems with steering mechanics, lack of acceleration and braking, Mario Kart Tour is quite fun. You can see that Nintendo is going to invest in future updates and that it wants the opinion of the players first. So ours is worth downloading and giving the game a try. It is relatively light, free and has beautiful graphics for a mobile game. Those who are fans of the racing franchise in the Mario universe really need to have this game on their smartphone . Almost all the classic characters are there. And the missing ones, like Luigi, will soon be among the runners. In fact, the system of "collection" of corridors is quite fun. The idea of unlocking, buying and conquering new characters leaves the game dynamic and alive for a long time. Add that to the cups and seasons, with the Weekly Leagues and the system of evolution of items, cars and drivers to have a game without expiration date. Datasheet: The online Windows XP simulator runs in a web browser and its operation imitates the operating system. You can use it to prank someone.