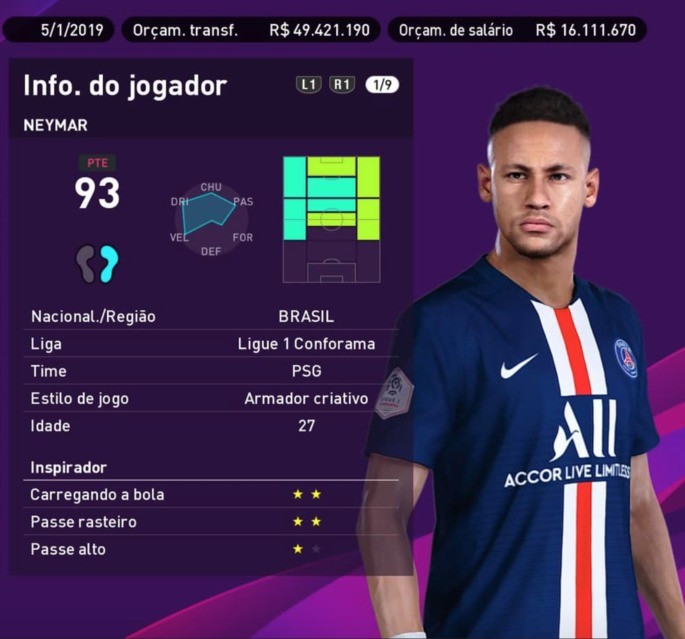 We know that Brazilian players are always among the best in the world. But Brazilians are also known around the world for their high speed on lawns. Names like Alex Telles and Wendell, for example, are acclaimed in Europe for being great sprinters. In this article we bring you a TOP 10 with the fastest Brazilian players in PES 2020 ! See which zukas you can not miss in your Master League if you want a super fast team!

Wendell was one of the highlights of Londrina in 2013, during the Campeonato Paranaense. After being elected the best left back of the competition, Grêmio aroused the interest, which hired him that year. He played for just over a year for the club from Rio Grande do Sul until he was signed by Bayer Leverkussen, from Germany, for 5 seasons. Today he is one of the big names in the position, having even been called by Tite to the Brazilian team. In PES 2020 it arrives with 87 speed and 85 acceleration . As one of a smaller club in Europe, your Master League pass may not be that high. It's worth keeping an eye on the boy!

Today Dudu is one of the main names of the palmeirense attack. He started his career at Atlético Goianiense, was sold to Dynamo Kiev, worked on loan from Grêmio and today is one of Verdão's offensive conductors. In PES 2020 he is considered one of the best players in the Brasileirão. In terms of speed, it is excellent. Arrives in this edition of the game with 87 speed and 88 acceleration . We also highlight the 85 balance , which makes Dudu a great player for the ends of the field.

David Neres is only 22 years old and is already an internationally known player. He started his career at São Paulo, having been sold to Ajax as the third biggest sale in the history of the São Paulo club. He had a good time in the selection of Tite, including scoring goals in a friendly. This right wing is an interesting option to compose a fast and deadly attack. The acceleration of 89 , added to the speed of 87, makes Neres a perfect attacker to pierce well-placed booms and defenses.

Everton is Grêmio's best striker and one of the best finishers in the Brazilian Championship today. He is one of Tite's darlings, appearing almost always in the last calls of the Brazilian team. Won a Copa America and 5 more titles for Grêmio, including a Libertadores da América, In PES 2020 the 23 year old boy has 87 speed and an incredible 90 acceleration! He is undoubtedly one of the best strikers of the Brasileirão in the game.

Another brilliant name that gained prominence in his career acting for Grêmio. Douglas Costa has also played for Shaktar, Bayern Munich and today is one of Juventus's midfielders. Despite having suffered some injuries in his career, he was highlighted by the Brazilian team. Known for its speed, PES 2020 has 87 of that attribute. Its acceleration is 92 . All of this is even more impressive with its 87 ball control and 92 dribbling .

Richarlison is a child of América Mineiro and Fluminense, having left Brazil early to act in England. He was sold to Wattford, but today he is an Everton player. He had good passages for the Selection of Tite, and is well known for his speed and agility, besides being a great goal maker. In PES 2020 his acceleration is 85, while his speed is 88. Like Douglas Costa, he has good dribbling numbers (85). As he is young, it is a good promise for anyone who wants to play the Master League.

Taison has always been remembered in Brazilian football for being a fast player, who manages to make good infiltrations through opposing defenders. He was featured at Internacional, having been compared to Messi at the time, which generated controversy. He has already played for the national team, and since 2013 he has been a Shaktar striker. In PES 2020 all your speed translates to 88 , while the acceleration is 89 . The ball control is 85 , with a dribbling capacity of 87 . These are very good numbers for a 31-year-old.

Felipe Anderson started his professional career at Santos. He was transferred to Lazio in 2013, the club where he served for 5 years. Today he is a West Ham player from England. He was one of the players who won the 2016 Olympics, this being his most important title in his career. In virtual football, it has 88 speed and 91 acceleration . These are great numbers for a midfield player, which makes Felipe Anderson a good conductor.

Lucas Moura was one of the great names of the recent era of São Paulo. After Kaká, he may have been the most important players in the São Paulo club. This earned him a millionaire transfer to Paris Saint-Germain, but the boy did not live up to the club's expectations. Today he plays for Tottenham, England, having been a recurring name in the national team for some years. In PES 2020 is the fastest Brazilian second of the game with 89 speed and 93 acceleration .

Let's face it: Neymar has the same 89 speed and the same 93 acceleration as Lucas Moura. What gives him the first place is the rest. There are 91 balance and ball control, in addition to 96 dribbling. Neymar is a machine, being one of the best players overall in PES 2020 . And all this, obviously, does not need to be presented! See also the best players by PES 2020 position !