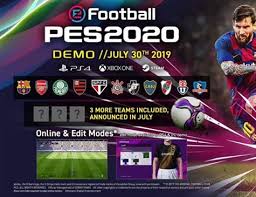 The PES has evolved steadily in recent years. The main point of evolution for sure is Konami's strong investment in offering licensed Brazilian teams with players very close to their real versions. We already know that PES 2020 will maintain this tradition and bring the Brazilian Championship to its peak. Some teams have already been confirmed in the next Pro Evolution Soccer title , which will arrive on PS4, Xbox One and PC on September 10, 2019 . Check out in this article which BR teams are confirmed in the game and in what state they will appear.

Fully licensed clubs are those that have a shield, uniforms, stadium and players faithfully transported to PES . As usual, not all Brazilian teams that will be in this condition in PES 2020 have yet to be confirmed . We bring, however, those already guaranteed and those that we believe will also be in the final version.

It is not just now that Palmeiras has been establishing a successful partnership with Konami and its Pro Evolution Soccer . This was the first Brazilian team confirmed in PES 2020 , fully licensed. In other words: if you are a fan of Verdão, you can command names like Felipe Melo , Lucas Lima and Miguel Borja , in addition to all the rest of the club's starred cast. The best thing is that Palmeiras is one of the already confirmed teams that closed a complete partnership with Konami. That's why your players are faithfully portrayed in the game. In fact, the similarities between virtual athletes and real athletes is impressive! At least in the case of Verdão, the inclusion of its game stage is also confirmed: the Allianz Parque stadium. In the 2019 version of PES it was already present, just as there was a version of the old Palestra Itália. Below are the ratings of Palmeiras in PES 2020 according to the demo:

One of the most beloved clubs in Brazil, Mengão, also had its presence confirmed in PES 2020 . Like rivals Palmeiras, Flamengo brings all the players in the squad portrayed with total perfection. It is chilling to see how Gabigol , Diego Alves and Éverton Ribeiro seem to have moved directly from real to virtual lawns. Uniform and symbol are also present, as the club has been fully licensed for the game. We do not know, however, whether Maracanã, Flamengo's historic stage, will be present in the game. Check out the Flamengo numbers for PES 2020 according to the demo:

The Tricolor Paulista has not yet been confirmed in any way in PES 2020 . We can, however, assume that the club will be fully present in Konami's next football title. After all, in 2019 he was one of five Brazilian teams fully licensed. In other words: uniforms, shields, players and stadium were present in the game. Check below the numbers of São Paulo for PES 2020 according to the demo:

Coringão is another great Brazilian who will probably be at PES 2020 . It is no longer from the previous version that he is present at Pro Evolution Soccer , and Konami knows very well that he has quite loyal fans among Corinthians fans. So we can also expect the Arena, updated uniforms and a cast faithfully portrayed in the next game . Check out the Corinthians numbers for PES 2020 according to the demo:

Vasco was one of five fully licensed PES 2019 . It is natural to expect that the partnership established with Konami will continue for the 2020 version . Like Palmeiras and Flamengo, Vascão has a large crowd across Brazil, being one of the main clubs in the country. Check out Vasco's numbers for PES 2020 according to the demo:

Vovô is another Brazilian team 100% licensed in PES 2020 . Fans of Ceará who enjoy the game football Konami will be able to control your favorite players. Magno Alves , Edinho and Thiago Carleto are some of the names with which the Japanese company negotiated rights. In addition, we will have uniforms, shield, crowd chants and the team's stadium in the game. That's right: the famous Castelão Arena will be present at PES 2020 .

In addition to Ceará, another great northeastern club that will be present at PES 2020 with full licensing is Fortaleza. Leão do Nordeste, as he is affectionately known among his fans, arrived at the Konami game as a surprise, as it is his first year in the Serie A of the Brasileirão. Just like its rival, Fortaleza will bring songs, uniform, squad, shield and stadium to the game. As both teams share the same stadium, for Konami it was a great move, since it will only need to include Castelão. Visually equal players will also appear, such as the famous Kieza , Wellington Paulista and Júnior Santos .

Galo Mineiro is the latest club to reinforce the list of licensed PES 2020 teams . With a history of good achievements in recent years, Atlético will close an exclusive partnership with Konami. So we can expect the club's greatest players, such as Ricardo Oliveira , Luan and goalkeeper Victor , to be faithfully represented in the game. There is still no confirmation regarding the presence of Atlético Mineiro stadium, Arena do Galo, in PES 2020 .

Clubs with the correct uniforms, but with generic players

The PES has always a disadvantage, which is not to obtain licenses from the top leagues in the world. This means that big clubs have their generic uniforms and shields. Classic stadiums are left out of the game, and some players either have their names wrong or are visually different from their real versions. The same will certainly happen with most Brazilian clubs in PES 2020 . Judging by the last edition of the game, we will have all clubs with their uniforms perfectly portrayed. The problem is that most of the casts do not bring real players, but versions with random names and appearances that do not match reality. This is due to the fact that it is necessary to negotiate rights athlete by athlete, something that is not always successfully accomplished. Below we can see the other clubs of the Serie A of the Brasileirão that will surely show up in PES 2020 , in addition to those already mentioned above:

The Brasileirão should be present at PES 2020

Konami lost its Champions League license. This blow was strong for the Japanese company, so it should keep the Brasileirão as a major attraction in its next title. We must not forget that the great asset of PES has been to focus on South American football year after year. This would guarantee all Brazilian A series clubs with complete uniforms. Those with generic casts can be modified, however. The policy of allowing players to modify squads is available on PlayStation 4 and PC versions, but not Xbox.

Recently we found out that Konami closed a partnership with all Serie B clubs of the Brazilian Championship. The values ??would be the same for all teams, distributed equally. This negotiation confirmed, it is the first time that the Second Division of the Brasileirão will be complete in a virtual football game.

Five stadiums have already been announced for PES 2020 . In addition to El Monumental, Camp Nou, Emirates Stadium and La Bombonera, Allianz Parque, from Palmeiras, is one of the confirmed stages. More recently, Konami also confirmed the presence of Castelão, home of Ceará and Fortaleza. Certainly other Brazilian stadiums will appear in Konami's next title, if the trend is confirmed. It is worth remembering that in the 2019 edition of PES appeared 8 stadiums of Brazilian clubs, in addition to the legendary Maracanã. If these stages return in the 2020 edition , we will have:

Anyone who wants to give a try at some of the Brazilian clubs that will be available in the next PES , will be able to do so already from next July 30th. The game demo will be available for Xbox One, PS4 and PC, with five Brazilian teams: Corinthians , Flamengo , Palmeiras , São Paulo and Vasco . See the 14 teams in the demo: See what we think of the PES 2020 demo ! Find out which leagues and stadiums are licensed!