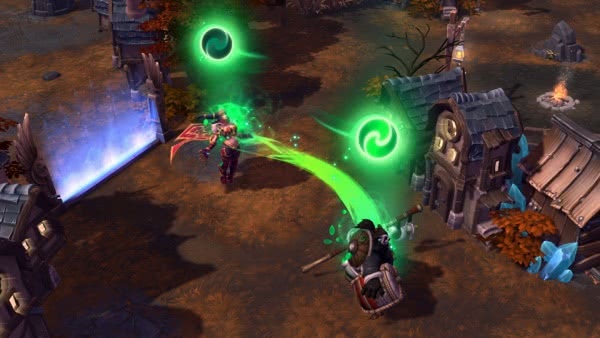 Alexstrasza is the new support heroine of Heroes of the Storm and the only one in the game that has its cures based on the maximum percentage of its own life. This dragon woman, from the Warcraft franchise , can both heal and deal damage. Check everything about your skills and find out which are the best talents to choose for the role you want to play.

This ability allows Alexstrasza to briefly transform into a dragon , significantly increasing the power of his other abilities. In addition, it increases protection against control effects, which means that many spells cast against it will fail. However, Queen of Dragons has a very high reload, so this ability should not be missed. Ideally, you should use it during a team battle . Although this is a very strong skill, you will not be invincible, so try to position yourself in a protected place, behind your team .

Gift of Life is your main cure. With this ability, Alexstrasza is able to heal with a large amount of life based on his current life . When in the form of Queen of Dragons, you don't have to sacrifice your life to heal , so you can use the ability more effectively.

When you use this cure, you plant a seed that will bring life to an area over a period of time. So, it is necessary that both you and your team position themselves close to the seed . When transformed into Preservation, this ability becomes stronger, increasing your life span and allowing your team to be virtually invincible during an onslaught.

This ability casts a fireball in a straight line , igniting all enemies in front of you, dealing damage over time. While Wing Slap, the ability, in addition to causing damage, also throws its enemies back . Use this ability mainly when you want to break a concentrated attack by the enemy team.

Mother of Life is a fantastic ability to help an allied hero who is under intense fire . Although the skill seems a little complex, it is actually quite simple. If you have your life to the fullest and heal a hero who is close to death, then your ally's life will be at its maximum and vice versa.

This ability allows Alexstrasza to leave the battle and bomb both his allies and his enemies. This means that she will be able to significantly heal her team or cause a lot of damage to opponents . If you use this ability in the form of a Dragon, it will greatly increase the damage done to the opposing team.