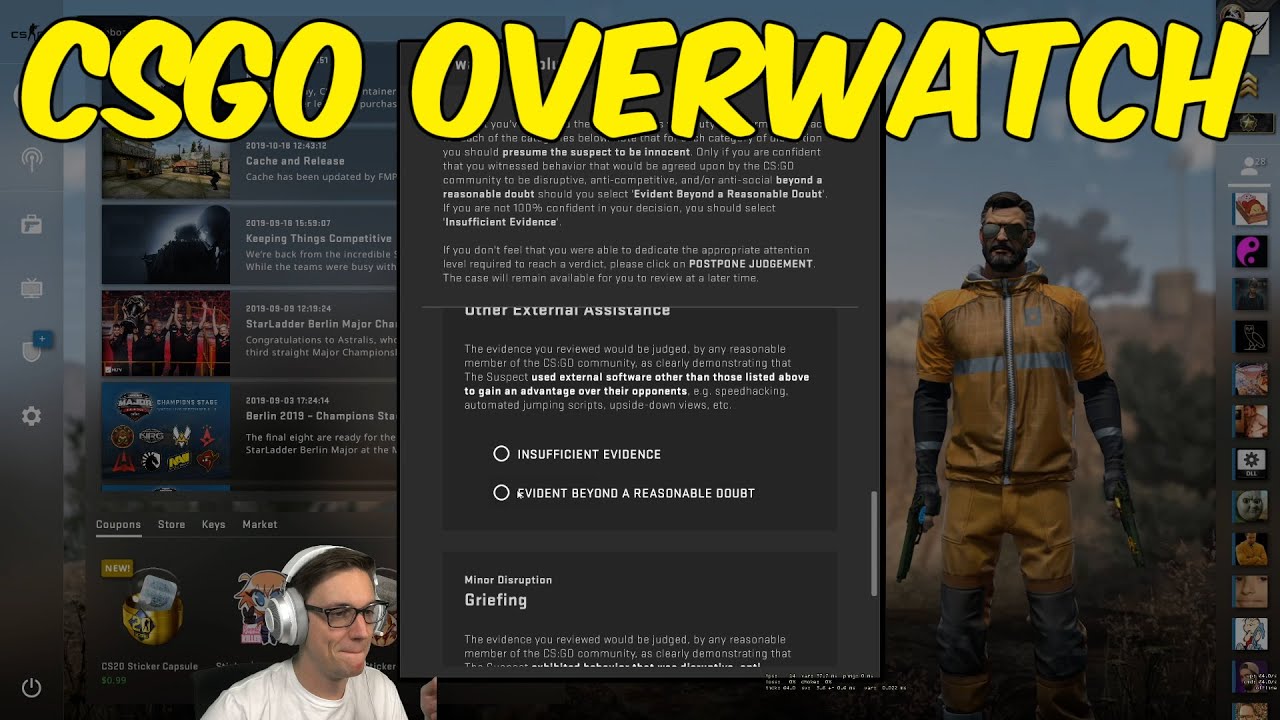 Overwatch (Inspection) in CS: GO is a system where players investigate irregularities in matches. Community members are selected who analyze the suspects . If they encounter cheating or inappropriate behavior, players are banned. The investigators analyze the repetitions of the matches of a player who has an unusual number of complaints. The group of investigators reaches a verdict and the ban will be applied according to the seriousness of the offense and the history of convictions.

How to do Overwatch?

To become a researcher on Overwatch you have to fulfill some requirements. You don't have to be a top player, you need to be a trusted player to be a watchman . The choice of researchers is made by several factors, but these are the essential ones: If you enter the selection criteria for Overwatch, you will be invited to watch. The most active players with good scores on Overwatch will receive more cases to solve. The investigators receive a replay with 8 random rounds to analyze if there was an infraction. The name of the reported player is "The Suspect" and the name of the other players in the match is not disclosed. All voice and text conversations are also eliminated so that the analysis is as transparent as possible, fixed only on the suspect's actions. There are two possible conclusions: "Insufficient evidence" and "Evident above suspicion". If the majority of the verdicts are "Insufficient proof", the suspect leaves innocent. There is also the possibility of postponing the trial and giving the verdict at another time.

When investigators are doing their job, there are some very useful commands for Overwatch. You have to be aware of all the details and you cannot miss anything. Check out the commands:

It is not exactly a command but a panel where you will control the repetition time. You can increase the speed in situations that don't matter or slow down to be more attentive to details. It is very useful to identify if the suspect is using cheating for the shot or sight.

This command is used to see all the players through the walls. It is essential to understand the development of the rounds and whether the suspect is reacting abnormally.

With this command, you will be able to see the trajectories of the shots. Very useful to understand more easily if everything is happening within the normal mechanics of the game.

As researchers are helping to improve CS: GO, there is an experience reward . If you send correct verdicts proving that you are a good investigator, you will receive the experience after solving several cases. The value of that experiment will be adjusted according to your researcher score. To get the reward, you must complete a game in any CS: GO mode. Many players feel that the reward is not fair and that it should be valued more for the importance of the role of investigator. In fact, Overwatch greatly improves the game experience by expelling cheating players, but making the verdicts takes time. Then, some players proposed that the rewards could be exclusive skins or some special medal.