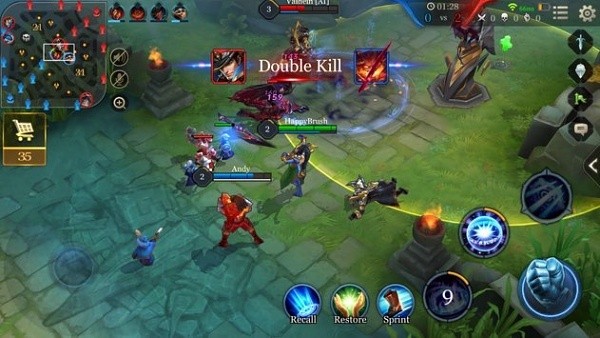 In Arena of Valor , a mage's primary function is to inflict damage and delay opponents. To protect defenses against physical damage, each team must have at least one wizard causing chaos on enemy lines. Know the roles of a wizard on the team and the three easiest to pick up if you're a newbie.

In Arena of Valor , there are two types of wizards: Despite this, all mages have the same main objectives during the game.

Functions at the start of the match

During this initial phase, wizards will have an advantage over other classes. Therefore, they must make a lane alone to gain an advantage over their opponents. In addition, they should also try to obtain the improvement of the Wise Golem , as this will strengthen the wizards even more to be able to farm effectively. In most cases, junglers will kill all monsters, including the Wise Golem, but some will leave the final blow to a wizard who needs that bonus. So try not to miss this opportunity.

Second half of the match

At this stage, you must help your allies as much as possible. Since it is a time in the game when the main objective is to destroy Towers and the wizards are not good at doing so, you should focus on eliminating opponents that are preventing the rest of your team from achieving their goals.

In the final phase of the match, it is essential that you eliminate all Snipers from the opposing team to prevent them from causing damage to your team. They do not necessarily have to end up dead, but make sure they are attacked consistently to prevent them from causing problems to your allies. If all Snipers are neutralized, take another player who is doing a lot of damage .

Azzen'ka is a powerful massacre wizard who manages to dominate team fights. To do this, you need to be well positioned to allow your skills to have a chain effect. Although Azeen'ka's skills have to be directed, with Sand Specter he is able to immobilize opponents as long as he needs to bombard them with his spells. This wizard's passive ability, Sand Snare, is especially powerful, as it allows enemies to be petrified . There, it is a good time to launch your Dust Demon on easy prey.

Kahlii is a tormenting mage with powerful abilities that damage opponents and help allies. Your Eternal Guilt ability, which slows and damages enemies, can be used to help your team escape a dangerous situation. In addition, Kahlii manages to move while using Resentment, another ability that helps his allies escape, if necessary. Activate your Nether Protection before using this ability and cause even more damage than normal.

This massacre mage is one of the easiest to learn to play and can be obtained for free in the game. Place Veera in a position away from enemies and play Fascination, which chases them until it reaches its target. This ability causes stunned long enough for her to use her other abilities that do massive damage. Do you like helping more than eliminating? Then meet here the Support heroes of the game!