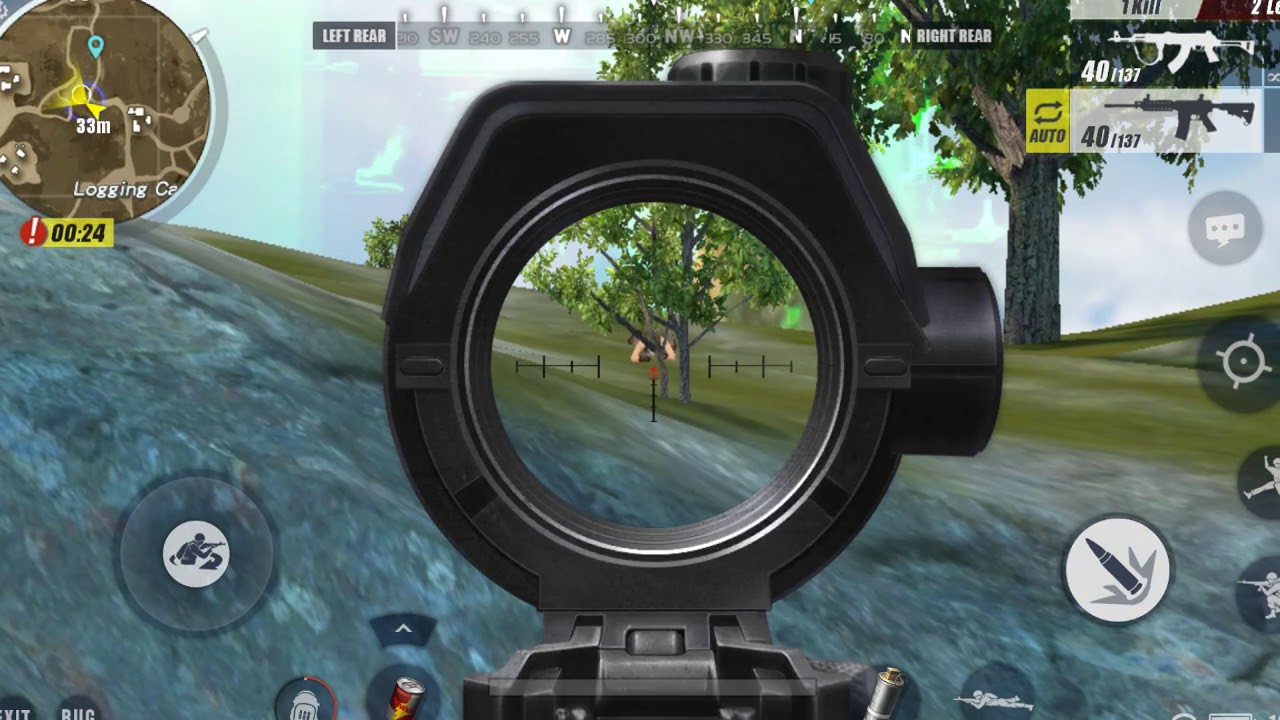 In Rules of Survival (RoS), it is essential to know the game's weaponry well. As in all Battle Royale games, weapons are not chosen, but found. Therefore, it is essential to know the defects and virtues of each one. Each weapon is designed for a combat distance. Sniper rifles have powerful scopes and do great damage over long distances. Shotguns, for example, are very effective at close range. Deciding between each weapon you find on the maps depends on your level as a player and your style of play Follow our guide and learn more about each weapon in the game. We use a scale from 1 to 10 to classify each weapon. This score takes into account the type of weapon, its versatility, the recoil, the number of accessories that can be applied and, of course, the damage it causes.

Long weapons, usually with telescopic scopes and large caliber bullets. They are ideal for eliminating enemies over long distances, but impractical in melee.

Soviet semi-automatic sniper. Despite being the sniper weapon that does the least damage, you can fire quickly without taking your eyes off the crosshairs, which ends up paying off. For the little recoil , it turns out to be a good sniper for beginners. You can take four types of extras with a 10-bullet magazine. Grade : 6

Chinese semi-automatic sniper. It is slightly more stable than SVD and can use extras to improve its recoil and increase the capacity of the charger that SVD does not allow. In the right hands, it is a good weapon capable of long-range shots. Grade : 7

A silenced weapon with a 4X original scope, with excellent stability . As it is automatic, it is effective over short distances. Deals little damage, but makes up for it with its rate of fire. Note: In RoS, AS VAL is in the assault rifle category, but we chose to place it here, as it uses extras and sniper ammunition. Grade : 8

A classic in the world of shooting games in general, AWM is a manual sniper that does a lot of damage . It comes standard with a 4X sight . As it is a manual sniper, the sniper is forced to take his eyes out of sight after each shot, which can help the enemy escape the field of view. It is a weapon for experienced players and, unfortunately, rare. Grade : 9

This semi-automatic sniper only appears on the Fearless Fjord map, where it takes the place of the AWM. Causes slightly less damage than AWM and comes equipped with a 4X sight from the ground . It has a magazine with 10 bullets. Grade : 8

A monstrous sniper, with the most damage of all game and capable of shooting a great distance . It is very rare, only available in drop. If you're lucky enough to get one, go to a high place and start spreading the good news. Grade : 10

Versatile weapons that give long and medium distances because they are capable of automatic and semi-automatic fire. They exist in good numbers, all over the map, and are the favorites of many players.

Common assault rifle, easy to find by the two maps. It doesn't do much damage, but it's easy to control the recoil and has a good burst rate. It is possible to use several extras that make it much more effective. It is a great weapon for beginners. Grade : 5

A modernized version of the classic AK, this rifle is capable of causing a lot of damage , especially at medium and short distances. Unfortunately it has a lot of recoil , which makes AKM difficult to handle, even using extras like front grip and stock. In the right hands and in controlled shots it is a good weapon, easy to find on the map. Grade : 6

This weapon is slightly more powerful than the M4A1 and has less recoil than the AKM, with an average burst speed. It is only available on the Fearless Fjord map, where it replaces AKM. Grade : 6

Above average and accurate damage in auto mode, but very recoil for the inexperienced player. Very quick to fire, which makes it difficult to keep the shotgun under control, even with the right extras. Grade : 5

EBR is very popular with RoS players because, in addition to causing a lot of damage to the bullet it uses, it has little recoil . With all the extras and in semi-automatic mode, it can be a good weapon for long shots, but the automatic mode is pretty cool at medium distance. Grade : 7

Relatively rare weapon , only available on the Fearless Fiord map. Its damage is very similar to AR15 or M4A1, with slightly less recoil. There are players who say they don't notice any difference at all. Grade : 6

One of the best weapons of RoS, thanks to a very fast rate of fire, damage and little recoil . Unfortunately, the AUG is a rare weapon , only available as a drop. Grade : 9

Short weapons, suitable for close combat. They usually have short barrels, large magazines and their shots do not do much bullet damage. However, the rapid rate of fire makes up for the little impact power.

Everyone knows the MP5. It has little recoil, a high rate of fire and, despite causing little damage, it is easy to find in the first moments of the match. Does not allow the use of extras. Grade : 5

The younger sister of the MP5, this submachine gun is effective at close range, is very easy to find and allows you to attach extras. It is not very powerful, but the rate of fire is high and with the right extras is a very effective weapon over short distances. Grade : 6

A very common weapon on the field of play, with a very high rate of fire and moderate damage thanks to its Russian technology. It is one of the most common weapons in the game, existing throughout the map. If the enemy is unprotected and close, there will be little left of him to tell the story. Grade : 6

A Belgian breeding weapon, very effective . It has good damage , insane rate of fire, little recoil, allows for varied extras and has a magazine of 50 ammunition. Read well, 50 ammunition! Unfortunately, it is rare Grade : 8

Half sub machine gun, half monster. Thompson is the submachine gun that does the most damage from RoS, but it is for experienced players because of its high recoil . Grade : 7

Very accurate , good damage, very high rate of fire and little recoil. Vector only fails with its small charger, even with extras. If you have the heavy trigger finger, you will run out of ammo quickly. It is not very rare. Grade : 6

Lethal weapons at close range, thanks to their devastating power. They use little ammunition, but make up for the damage they do. For medium distance, they need the choke or the bullet loses distance. The recoil is massive in almost all.

Shotgun easy to find on both maps. It only allows two extras and takes 5 ammo. Although basic, it is very effective inside buildings. Grade : 5

A classic-looking weapon, with only two ammunition, one in each barrel. Although slightly more powerful than the M870 it is not for beginners. Perfect for the start of the game. Grade : 5 WRO One shot at a time. It has brutal damage, even at long range (if the choke is placed). But be careful, as it is slow to reload. If you miss your shot, switch quickly to another weapon. Grade : 4

It mixes the power of the shotgun with the speed of reloading an automatic weapon. It only takes an extra. Grade : 6

One of the best shotguns in the game, SAIGA is powerful , quick to reload and manages to use extra assault rifles such as spyglasses, butts and handles that greatly improve it, making it a real assault rifle. It is only available in the Fearless Fjord, unfortunately. Grade : 8

Available only as a drop, this light machine gun can fire heavy ammunition from a great distance, without having to reload as many times as a shotgun. If you can find one, use it well. Grade : 9

Throw rocket grenades without mercy or mercy. It is the best way to stop a vehicle or detonate an enemy that is hidden. There is little ammunition available, although this weapon appears on the map. Grade : 8

Pistols are weapons used in the first moments of the game, when the player has just landed and needs a way to defend himself. Apart from those first seconds, it is rare to see someone wearing one.

A basic pistol, which does not allow extras, with a 12-bullet magazine. Slightly above melee weapons, far below a submachine gun. Grade : 3

A more powerful pistol, with 7 ammunition in the magazine. The Desert Eagle version of RoS is very limited, not having the damage you would expect. Grade : 5

Explosives that can be launched for different purposes. Some can confuse their enemies, others serve to eliminate them or deny their movement.

The grenade that everyone knows, adores and fears. Use it inside buildings or against sheltered enemies. Do not delay to launch or you will regret.

Slightly stronger than the simple grenade. It makes an unpleasant sound that scares other players or simply resembles a farm. Use it like a normal grenade.

A non-lethal grenade, but it incapacitates your opponents for a few seconds. Use those valuable seconds to send the enemy home early.

Use it to camouflage your movement or to protect your escape.

The most common throwing explosive in RoS. Use it whenever you feel it is necessary, but watch out for the flames. You can get hurt if you're not careful.

Weapons used in survival situations or by players with a great deal of insanity who want to run faster. They are useful for breaking glass silently or when your bullets run out.

If you always wanted to enter the UFC and couldn't do it, now you can show your talent.

The lightest weapon in the game. There are those who swear it gets faster with this chicken in their hands.

It offers some protection against enemy shots and quickly breaks an unprotected head.

The melee weapon that does the most damage in RoS. Just get close.

The fastest melee weapon in the game. Better than a stab are twenty-four stabs. Remember to learn the advantages and defects of each of these weapons, as their performance in play will depend on the weapons that appear. 10 Tips for staying alive in Rules of Survival