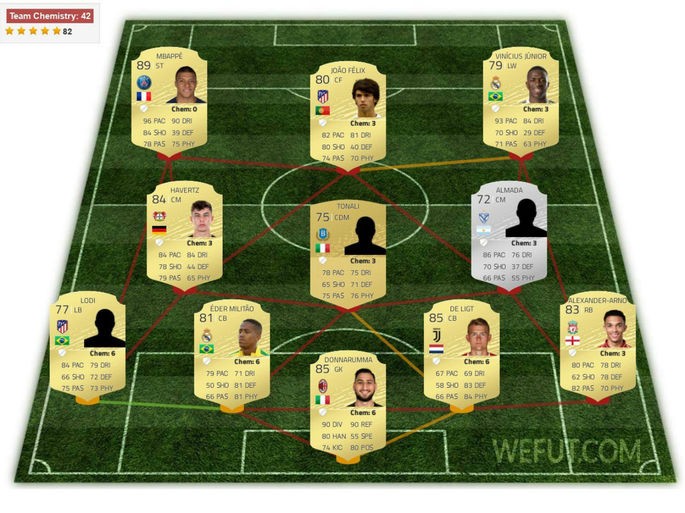 The promises of FIFA 20 are those who are young and have the potential to achieve a high overall as they become more experienced. There are several promising players you need to keep an eye on! Below we have created lists of the best new players up to the age of 21 who have high potential. We divided them by position and, at the end of the article, we created a team with the 11 most promising. Be attentive and do not let good business opportunities of young promises pass by.

Donnarumma remains FIFA's most promising goalkeeper . In version 20 , its potential reaches 92. Alban Lafont and Andriy Lunin are the other two defenders of the networks with the greatest potential.

Matthijs de Ligt is Piemonte Calcio's greatest promise. In FIFA 20 he appears as the most promising defender in the game. Shortly thereafter, Militão, from Real Madrid, appears as an imposing duo for de Ligt, mainly due to his resistance (88).

Champion of the Champions League for Liverpool, Alexander-Arnold appears at the top of the list of the most promising right backs in FIFA 20 . He has a great cross (88) and a good long pass (82).

Brazilian Renan Lodi, currently at Atlético de Madrid, won the post of best left back among the most promising. He does a double with Canadian Alphonso Davies of Bayern Munich

Sandro Tonali still needs to eat a lot of beans and rice to be a high-level steering wheel. But it is promising with its 89 potentials! Right after him we have Federico Valverde and Nicolás Domínguez, with a possible 88 when they reach their best football.

There are many young socks who can reach the levels of legendary players, such as Zidane and Kaká. Kai Havertz is a great example of this, not only because of the 92 potential. He has 87 ball control and 84 dribbling. Imagine when you reach 92 ...

Mbappé and Vinícius Jr. are already known to everyone. Mbappé is more than promising, since at 20 he is already a PSG star. And it can still evolve to 95! Vinícius Jr., who is looking to move up to Real Madrid, is another name that you need to look at with affection for your team.

Former Benfica João Félix arrived at Atlético do Madrid with unquestionable status as an ace. The young Portuguese can reach 93. He is fast, has good dribbling and is able to finish with precision.

See who are the good and cheap FIFA 20 players for Career Mode! Meet the end-of-contract athletes to hire for your club! The Word to HTML converter helps you convert documents like Excel, Google docs, PDF files and any other visual document to HTML.