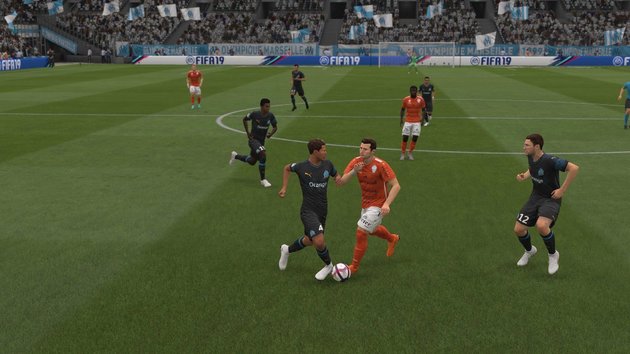 Learning to defend yourself in FIFA titles is often more difficult than learning to attack. FIFA 19 is no different. Mainly with the changes in the tactics system and in the ball dispute system of this last edition. Many players even complain that they have difficulty in stealing the opponent's ball. If this is your case, pay attention to the tips we bring you. We will teach you step by step so that you always steal your opponent's ball. Whether standing up or using the risky cart, the ball will always be yours after reading our article and putting our strategies into practice.

1. Go to the training ground

Many FIFA players belittle the Skill Games available in the training part of the game. Know that the first thing we can recommend you is to do the exact opposite. Participating in defense mini-games whenever possible is a way to improve your technique as a marker. There you can train the timing of a cart, for example, or standing boats. Even though the atmosphere of Skill Games is not the same as that of an official online game , it allows you to begin to notice all possible movements of attacking players. His vision of the game also improves, mainly because he begins to understand how to act in that small marking space between his defender and his opponent.

2. Know when not to use the race button

Everyone knows the expression "pass crowded". Well, one of the biggest mistakes when trying to steal a ball is running towards the ball. Usually you "pass through the opponents" and still leave the way free for him to reach the goal. The secret, therefore, is knowing when to take your finger off the race button. Run just enough to get closer to your opponent, if that is the case. Most of the time it is best to use the player closest to the ball, just to avoid these unnecessary runs. Keep in mind that trying to get close to your opponent from a distance can be a risky move.

As soon as the opposing player approaches, choose to surround him. Using the L2 / LT button, you will prevent the opponent from running past your player. This is certainly the most effective tactic to steal the ball safely and effectively. The most pro players in FIFA 19 master this technique and rarely score goals. But for it to be really efficient, patience is needed. Hold on to avoid unnecessary boats and carts. The ideal is that you start to surround the opposing players already in the midfield. Removing spaces is essential to delay the approach of opponents in your area. The great advantage of this method of stealing the ball is that it causes the defender to aim only at the ball, not the player with it. So if the opponent tries to make a table or simply pass the ball to a teammate, his defender will follow the trajectory of the round and will not lose sight of it.

4. Keep an eye on the ball, not the opposing player

It is important to reinforce this point because it is the penultimate step to efficiently steal the opponent's ball. Once you aim for the ball, not your opponent, you don't risk making the wrong moves and exposing your defense. You must be attentive and keen to follow the ball's trajectory and try to predict where it will be played next. This will prepare you for two situations. The first is if the opponent wants to take a chance with a penetration in his area. If you keep an eye on the ball, surrounding it, you can easily steal it with a standing boat. The second is that the opponent can spend a good few minutes just touching the ball from the side, as he will have no alternative to make the charge. This will make it easier for you to be able to intercept the ball at the right time and start a counterattack.

5. Appeal to the body game

Finally, time to steal the ball. Try not to use the cart button, especially if it is too close to your large area. In addition to possibly generating a card for your player, you will be giving the opponent a dead ball. The cart needs to be given carefully, preferably at times when there is an exchange of opponent passes, and you can intercept the round. The standing boat and the body game are the two most effective techniques, therefore. The first one also requires a calculation to not miss the time, but at least it will rarely cause a fault. The body game is super efficient. Using a player who is close to the ball, surround your opponent and approach slowly, trying to cut your space. Once you succeed, you can use the defender to play a body game. As in FIFA 19, defenders have more advantage over attackers, at least physically, it is the most effective way to steal the ball.

6. Act according to the needs of the game

All of the above tips are important, but feeling the game is even more so. Especially because the matches in FIFA 19 are dynamic, and situations do not always draw the way you want. So sometimes it will even be necessary to give a cart to the middle, to kill the counterattack. Don't be afraid to do this. Especially in online modes , where what really matters is just victory. So feel the game and see what it asks of you. Do not hesitate to try a boat out of your area if you think it will work. Take care only with steals inside the small area. Using ? / X or O / B almost always causes a penalty. The ideal in these cases is just to surround the opponent and try to take his space.

FIFA 19 has a robust tactic system. These tactics allow changing the behavior of players on the field, both defensive and offensive. Using this to your advantage is indispensable. You can ask certain players to be more incisive in individual marking or to focus on the interception of the balls. You can do something similar with the general behavior of the team. You can compress it or make it more open, for example. There is the possibility to advance the appointment or to make it further back. All of these choices will affect your ability to steal the ball. Never use a team tactic that is inconsistent with your game. Also, always think about how your opponent plays. Study it in the first fifteen minutes of the ball rolling. When it is an online game , you can clearly understand the preferences of the other player in terms of attack. Knowing whether he prefers crossed balls, attacks more in the middle or takes chances on the sides of the field is essential for you to trace your game and discover the best moments to steal the ball. This document was edited with the instant web content composer. Use the online HTML editor tools to convert the documents for your website.