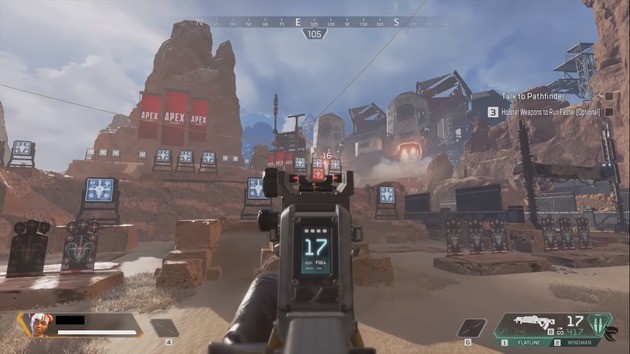 We are often doing a game so well and, out of nowhere, we missed some bullets and we are out. Practicing aiming in Apex Legends is an infinite task that you can never master 100%, but there are certainly some ways to improve it and take your game to the next level. Check out below 8 ways to improve your aim in Apex Legends!

1. Movement is more important than aim

Unlike most FPS, in Apex Legends your movement is more important than the aim. This is because combats always take place at high speed and in irregular scenarios that can be exploited to modify their position, speed, exposure, etc. Some ways to improve your handling in combat are:

2. Make sure you get the highest frame rate per second possible

The frame rate per second is crucial for you to be able to keep up with your opponents right, especially since fighting is the main moment when your game loses performance. Check out our guide on how to optimize Apex Legends and try to prioritize performance over graphics quality. You will notice that the movements are much more fluid and you will be able to see well where your bullets are going.

Hip Fire is the “aimless shot”, which occurs when you shoot without zooming in on the right button. It may seem strange, but you definitely don't need to use hip fire every time. During close-quarters combat or in places where you know there are many opponents, limiting your field of vision and mobility is far more damaging than the risk of missing a few shots. In close combat you will probably hit most of the shots even without using the scope. In addition, when you know that other opponents are nearby, it is extremely important that you constantly reposition yourself. This becomes very difficult if the scope is open, not to mention the possibility that the scope itself can disrupt your perception of the surroundings.

Aim positioning is a concept present in any FPS. According to him, you should always keep in mind the points on the screen where your opponents can appear, and leave the aim there, simple. However, the number of players who move around in random places on the screen is very large. One of the factors that hinder players' targeting is looting. Many players move around with their sights fixed on the boxes without any need. In addition, many of them still do not correct the aim when they finish looting. Do not do it. Only place the crosshairs in the direction of the box when it is strictly necessary and then immediately reposition it to the most likely place where an opponent can appear. The best way to improve your targeting position is to record your matches and watch them. You will be shocked by the number of times your aim is aimed at useless points on the screen. Correct this and always keep it at the height of the opponents' head or chest.

5. Master the spray pattern of weapons

Recoil is the recoil that the gun gives when you fire multiple shots (spray). This causes the shots to spread and not exactly hit the target. Each weapon has its own spray pattern, that is, its bullets spread in a specific way. Spend time in training mode by shooting at a wall and observing the spray pattern of each weapon. Then, move or mouse in the opposite direction to the recoil to make the bullets reach the smallest area possible. Mastering the spray pattern is essential in Apex Legends and is a skill that you have never mastered 100%, mainly due to updates. You don't have to hit all the bullets in the same place, but keeping them close to the center point is simply crucial to your evolution in the game.

6. Do not underestimate the training mode: practice tracking and flicks

Although many players don't give a shit about training mode, Apex Legends is one of the few FPS that provides many tools for you to really improve your aim. That's because the various targets in the training mode are perfect for you to train your shots for most situations you will encounter in matches. Tracking consists of “tracking” the target, firing while it moves. The technique is not simple since you need to master the recoil of the weapon while moving the sights to the side. Training mode moving targets are perfect to help with this. Flicks or flick shots are the famous "mouse drag". That's when you reposition your aim extremely fast to connect shots at opponents who were far from your aiming position. The more you practice your aiming position, the less you need flick shots, but since it doesn't depend 100% on you, it's good to practice these drags. Targets that simulate opponents and moving targets in training mode are very suitable for this technique.

This problem occurs in all shooting games. Many players like to copy the mouse settings, crosshairs, graphics and so on from other players (usually their idols or higher level players). Do not do it. Test various settings, choose the one that works best for you (especially the sensitivity) and don't care about anything else. Copying the Shroud configuration will not make you play like him.

8. Keep the mouse neutral and aim with your arm

If you often watch streams from professional players, pay attention to how they move the mouse. It is almost unanimous that all high level players have not seen the front of the mouse anywhere (it remains neutral, pointed forward). Thus, there is no wrist movement and the entire aim is made with the arm. Let's say you flex your wrist to shoot to the right and an opponent immediately appears on the left of your screen. Your wrist will need to return to the neutral position and then move to the left. There is no fluency in the movement and you will often lose precision in this process. Get used to moving from the elbow down, without flexing the wrist. This will give your movement a lot more fluidity and control. Click here for more Apex Legends tips and tutorials!