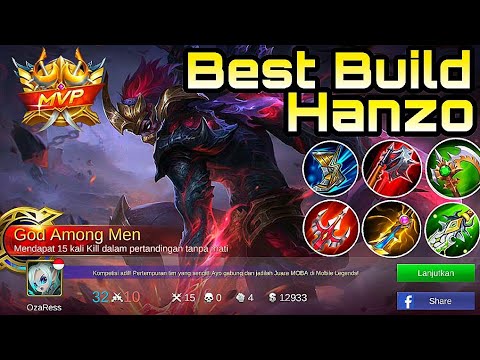 Hanzo is an Assassin character with a specialty in Explosion. Its gameplay is different from the other characters, considering that its ult can leave you very vulnerable and, therefore, it needs to be used with great care. Hanzo is one of the characters who can change form and gain new skills. However, unlike the others, the Blood Demon works as an extension of Hanzo, making the character not the easiest to use. Check out the essentials for you to play Hanzo well.

When units are eliminated around, the Blood Demon absorbs their souls into your body to be used as energy. Earn 2 Demon Blood if they are non-hero units and 10 if they are a hero.

Unlock temporarily after 5 basic attacks. Hanzo uses Ame on Habakiri to devour an enemy unit and digest it over a period of time. In doing so, Hanzo receives 10 Demon Blood. Can only be used against creeps and minions. If the attack speed is fast enough, each Hanzo attack can unlock 2 stacks.

Cooldown: 7.5 Hanzo opens the portal of souls and deals 140 (+ 60% Total Physical Attack) physical damage immediately. The portal then deals 40 (+ 15% Total Physical Attack) physical damage every 0.5 seconds for 4.5 seconds. Whenever the portal deals damage, Hanzo recovers 1 Demon Blood. If Hanzo walks to the center of the portal, he retrieves the used Demon Blood. Learn all the slang and expressions of Mobile Legends!

Unlock temporarily after 5 basic attacks. Hanzo deals 300 (+ 15% of the target's maximum HP) physical damage, also regenerating 10 Demon Blood. The damage decays when the targets are not heroes. If the Attack Speed ??is fast enough, each Hanzo attack can unlock 2 stacks.

Cooldown: 10.0 Hanzo transforms into Demonic Soul and advances to the designated location, dealing 80 (+ 30% Total Physical Attack) physical damage to the area. Unlocks 1 layer of Ninjutsu: Demonic Party. The ability can trigger the bonus effects of basic attacks. Also learn how to play Mobile Legends on PC!

Regarding skills, Hanzo is very easy to use. Upe Demon Party first and Ninja Pinnacle next. Be sure to add points to your ult whenever possible. During fights, use basic attacks until you can use Demonic Thorn and then return to basic attacks. Only use Ninjutsu: Devastator for movement. School one of the following battle skills: Flash, Arrival and Advance.

Tips on how to play with Hanzo

Cost: 2020 Check out our super guide to all Mobile Legends items!