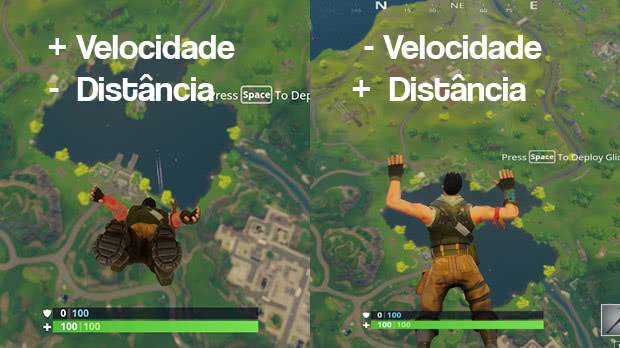 In Fortnite: Battle Royale all games start with a hang glider start. This device allows the player to slow down and land smoothly on the map. Everyone gets off the flying bus the same way, so learning to master your jump will increase your chances of winning! Follow our guide and learn to fall very quickly, exactly where you want.

How to fall faster

From the moment you leave the flying bus, you are in free fall. By changing your character 's body position , you can fall faster or slower . Each choice has advantages and disadvantages according to the location you want to reach. If you prefer a quick jump, tilt your body forward and dive at great speed. If you prefer to glide longer and reach much further, tilt your body back. It is very important to choose where you will land for several reasons. If your goal is to fall as quickly as possible, it is essential to avoid hills or tree-lined places . These types of places with higher height will cause the hang glider to open automatically earlier, as it detects the proximity of the ground. This will make you lose your fall speed. The hang glider activated and now? It is now important that you move slightly sideways in relation to where you want to fall. This will maintain your speed. Tilting your hang glider up or down will make it much slower. And being slow is a shortcut to defeat. Since in this position you cannot see ahead effectively, a good tip is to use your mini-map to orient yourself.

There are many other good places to fall, but we chose places that combine security and a high probability of loot .

A swampy area, Muddy Muddy is often avoided by many players, as movement in the mud is slow. In addition, it has little cover, but in the most central tree there is a high probability of finding at least three chests with good loot . As the Prison is close by, many players prefer to avoid the swamp. Don't fall into that error.

Near Campos Fatais , at the south end of the map, there are some trucks placed in a bizarre way. What is not bizarre are the chests that this place can have. The area is still relatively unknown, but as it is a large area, be quick to loot the chests and don't take your finger off the trigger.

Very close to the coast, in the semi-forested area of ??Cabana Solitária there is a large watchtower. There is a high probability of at least two chests and many resources. Always try to land on the tower's roof and mine down with your pick. This is one of the cases where it is super important to master your descent. This location is at one end of the map, so you can expect little resistance. Obviously, when the storm begins to surround the playing area, you need to move quickly.

This location is in a central area of ??the map and there is a high probability of getting good loot, including legendary level weaponry. As it is located right in the middle of the map, near Fontes Salgadas , it will be very difficult to be cornered by the storm. In addition to being central, it is elevated, allowing you to observe what is around you. If you luckily get a sniper in that chest, your opponents will go into a cold.

House on the North Coast

Away from everything, this house is a very safe place. The ruined garden house almost always has a chest full of valuable loot . The big house also has some very useful features, like ammo. Many players prefer to stay closer to the center of the map, so you'll be able to loot houses in peace. There are other places with a good chance of good loot . However, as some are more in the center of the map, it will be more difficult to avoid the shooting. As always, in games like Battle Royale , what matters is your playing style and strategy.

Put the theory into practice. Observe the route that the flying bus will take on the island. Remember that it advances in a straight line and takes thirty seconds to travel the path. Study the map, choose a place to land and jump. If you choose a very remote place to land, remember that you need more time to walk to the game circle before you are caught in the storm. Many players tend to want to jump as soon as the warning appears on the screen to get loot much faster than the others. This has advantages and disadvantages: If you prefer a more tactical type of game or are still learning to play, wait a while and jump on a quieter part of the map. After all, Fornite Battle Royale is also a game of patience and strategy. If, however, you prefer to fight and achieve many eliminations, jump quickly to the most populated places. Fortnite: Battle Royale , like any game of the same style, depends a lot on luck. However, try to learn as much as possible about the game , know the weapon well and improve as a player in each game. Thus, it could become a force to be feared on this crazy island.