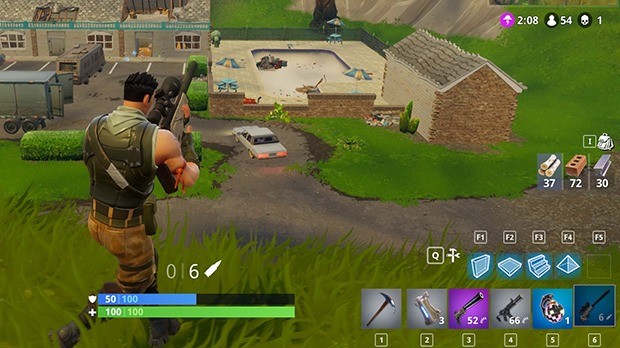 In Fortnite Battle Royale , sniper rifles are one of the most feared weapons, thanks to the massive damage they inflict over long distances, often achieving a kill with just one shot. Follow our guide and learn how to make the most of your talent as a sniper.

In Fortnite, the armament is very varied . There are different weapons, with different qualities and types of shot. However, when Fortnite refers to a sniper rifle , in a challenge, for example, he is identifying the following weapons: AWP, Semi Automatic Sniper and Hunting Rifle.

A sniper gun without scope ?! It is true. Although scope or optical sights are very common, the first sniper weapons did not have these aids. Inspired by these classic rifles, the Fortnite Hunting Rifle is a weapon that uses heavy bullets and can do a lot of damage, as well as not being difficult to find on the map. With a lot of training, there are players who get really cool shots. However, the lack of optics makes it difficult to use this weapon in long-range shots.

A classic sniper rifle, with powerful optics, great damage capacity and precision. Unfortunately, in addition to being difficult to find, you need to take your eyes off the target after each shot. So make sure you get it right.

An incredible rifle that automatically triggers bullets , so you don't have to take your eyes off the crosshairs. Although each bullet does little damage compared to other snipers, it pays off with a higher rate of fire , thanks to its 10-round magazine. Unfortunately, it is a very rare weapon .

A monstrous sniper rifle, capable of detonating structures and players at great distances, with incredible damage . You will probably be able to detonate walls and still seriously hurt the enemy player. It is very rare and has a reload time of four seconds , which slightly balances its damage capacity.

One shot one kill

This is the motto of any sniper, in any game. It doesn't matter whether it's CS, CoD, Ghost Recon, PUBG or Fortnite. If you have a sniper rifle, you want to get a kill with just one shot. To do this, you need to pay attention to three fundamental details: aim, position and practice.

Fornite is a game full of action, epic builds and intense shooting. But sniper shooting is quite different from using your pump at point blank range on a street in Torres Tortas. Learn to read your opponent's movements to calculate the right moment to shoot. No good Fornite player will stand still for you to aim and shoot perfectly, so learn to predict the enemy's movement. In addition to the enemy's movement, you need to calculate the bullet-drop, that is, how much your bullet will fall in relation to the target according to the distance. The optical sight or scope of the AWP and Semi Automatic Sniper has lines called reticles . In the crosshairs, there are horizontal lines that have the name of Mil-Dots. Use the Mil-Dots to calculate how much you need to raise your aim to reach the target. Many players report that in Fortnite you should always shoot slightly above the target. If you are at the top of a mountain, building or other high place, you usually do not need to use mil-dots to calculate your shot. As it is in a high place, the bullet will make a more straight path, avoiding curvature by the force of gravity.

The second detail to be a good sniper is to choose the right place to shoot. In Fortnite, you can build your own sniper nest, so make it tall and powerful . It is not uncommon for a game to be won by the player with the highest build. In addition to high places, get used to shooting from unsuspecting locations. Everyone is looking at the top of buildings and they forget lower windows or bushes. Surprise your enemies! There are places where it is easier to ambush enemies than others. Learn to recognize them. Whenever you have to shoot from a shelter or protection, use your right side . Why? Because it exposes as little of your body as possible to enemies, since in Fortnite players use the weapons on the right. If you shoot from the left side, you will offer your opponents a bigger target. Don't make their lives easier.

No such advice is valid unless you practice a lot . Shooting sniper rifles effectively needs to be quick and almost instinctive. Whenever you take a sniper, take the opportunity to train your skills with very long shots. It will be very difficult to become good with snipers if you spend your life booming with your shotgun. A good Fortnite player needs to master all the weapons in the arsenal. Start looking for shots in the torso and gradually try headshots. Don't wait for the perfect shot, this is a myth. When in doubt, shoot, watch your shot and correct your mistakes.