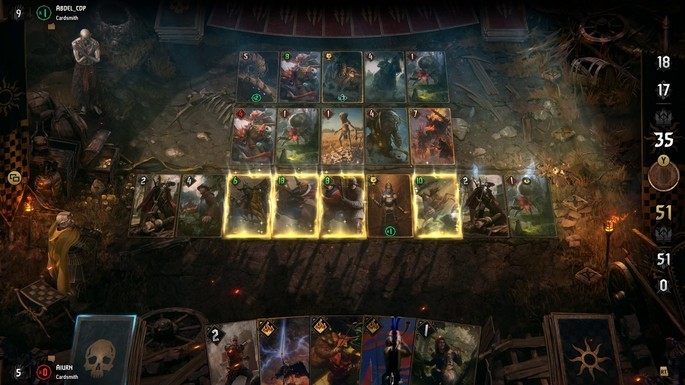 Whoever played The Witcher 3 is certainly familiar with Gwent . The most famous card game in the wizarding universe Geralt was so well received by players that it ended up winning a title of its own. Available for consoles, PC and iOS, it's fun yet challenging. So if you are in need of some tips to become an expert , we can help you. Forget everything you learned in The Witcher 3 . Gwent does have the same rules and the same dynamics, but it is a little more complex. So that you don't get lost and manage to master the cards, check out what we have prepared for you below.

You may have won the Passionflower tournament in The Witcher 3 , but that doesn't mean your life will be easy on Gwent . The game features more refined, complex and even confusing game engines. In the beginning it is not recommended that you go straight to multiplayer matches . Firstly, because your deck will be very weak. Second, why you need to reinforce your learning about cards. The early stages of single player mode are the best way for you to evolve your game. In addition, if you do not want to invest real money in Gwent , you can give your deck a boost by winning good cards in the first games you play.

2. Focus your attention on only one Faction

One of the most interesting parts of Gwent is being able to choose one of five Factions. Each has specific cards and unique special powers, which means that being a master in all of them is a long, arduous mission that is certainly quite complicated. So ideally, you should focus on just one of these factions. So think carefully before making your decision. Northern Kingdoms , Nilfgaardian Empire , Skellige , Monsters and Scoia'tael are the Factions available. For those just starting out, it may be interesting to stay with either Northern Kingdoms or Scoia'Tael. Northern Kingdoms focuses on the strategy known as the swarm. In other words: they are soldiers of little power, but who support each other, increasing their card levels while taking power from the opponent's cards. Scoia'Tael is designed to fill the field with dwarf cards. Although they are also of low power level, many points are quite easy, since there are several cards that can be put into play.

As soon as you choose a Faction, the next step is to become a master of it. Getting all the cards available and building your deck is certainly a very fun activity and a great challenge. But that is not exactly what you need to worry about at first, but to evolve as much as you can in the Rewards Book. The Rewards Book is a section of the game where you can see all available decks and Faction leaders. Many will be blocked in the beginning. Your own Faction will have only one leader available. Evolving it to the maximum will guarantee access to the other leaders, which increases your playing power. This is done using reward points, which you earn by defeating opponents and completing daily missions.

Unfortunately, decking is a skill that not everyone has. In Gwent this is also confirmed. That's why we advise you to use ready-made decks, which are often available on websites. This saves you time, prevents stress and allows you to have a cohesive set of cards. Sometimes you can just take a look at other people's decks to get inspired to create yours. This is also true, especially for those just starting out. The essential thing is that you have a deck with many bronze cards, some silver cards and a maximum of four gold cards, which is the limit.

Playing Gwent every day is important not only for training, but because it is the best way to win new cards. The game awards you prizes if you get at least six crowns every day. A victory grants two crowns. But if you win just one round, you win one. In other words: in just three games, you can already get three crowns daily and win your prize. In addition, there are specific quests that give you reward points whenever you complete them. They are related to game moves, such as using certain action cards or unit effects.

6. Give preference to neutral cards

Many players end up dividing their attention between two Factions. There is no problem with this strategy if you have mastered two different playing styles. The most important thing, however, is that you focus your attention on getting neutral cards. Neutral cards are those that work advantageously on all decks . Geralt, for example, is quite versatile, especially in his Igni variation . Djikstra, although he belongs to the Northern Kingdoms, is a great spy, as he has little energy and allows the purchase of two cards. Even if you like certain iconic cards, like some variations of Geralt or Ciri, in the beginning don't focus so much on getting them if they are not useful in your deck.

Gwent's purpose is not to collect letters. So it is not worth having cards of a type of deck that is not yours and that you do not plan to have. If you chose, for example, to have a Skellige deck , why spend time and resources on Monster cards? So when you win cards that you are not going to use, break them to get resources and invest them in what really matters. Repeated cards or identical cards, but with different arts can also be dispensed with. However be careful: do this only with bronze or low power cards. Golden cards should be kept, as they are valuable and rare. Furthermore, this tip should only be followed by those who are really sure that they will not change Faction later. If you regret it, you will not be able to go back and you will have to waste a lot of time getting the dismissed cards again .

8. Have more cards in hand than your opponent

In Gwent there are basically two ways to gain an advantage over your opponent. The main one, of course, is to have more strength on the board. Another, whose importance is fundamental, is to have more cards in hand than the opponent. We can say that in this sense, playing Gwent is like playing poker. You can fold a round if you find it smarter to keep the cards in hand to try your luck on a next turn. This has to do with game control. If your opponent plays a card that you can't face, end your turn and focus on winning the next one. This will make you come back with more cards than your opponent. That is: even without cards on the field, you already have an advantage.

9. Know when the shift is lost

The previous tip is closely linked to this one. Sometimes you are losing by 10 or 15 points. Running after and stacking cards in the field is not the best solution. Analyze your hand well and see if it is possible to change the landscape. If not, give up. Gwent is a strategy game in the first place, so play with that thought. The cards need to combine with each other so that they all increase their potential and you can make good combos . It is much better to have a good hand for future rounds than a useless hand for the current round.

10. Dominate your opponent in the first round

Whoever wins the "heads or tails" at the start of a match will start playing. In card games like Hearthstone or Yu-Gi-Oh! Duel Links , this may not always be an advantage. It is interesting to be the second to play, since you already know what you are going to deal with. Whoever wins the first round at Gwent , starts the second. But imagine that you miss the second. You and the opponent will go to the last round with few cards, but you will have the advantage, since you will be the second to play. You can draw a quick strategy according to the card put in play by the opponent. In addition, winning the first round ensures that all the pressure is placed on your opponent. There is more chance that he will try to use his whole hand to win and stay alive. Again: if he wins, there are many chances that you will be the big winner, as you will have the advantage literally in hand.

11. Use and abuse support letters

There are more than a hundred support letters in Gwent . They still vary in type. Many will give your cards an energy boost . There are those that give energy to an ally and take points from an enemy card. Others only attack one or more enemy cards . These cards are just as important as those used to accumulate field points. There are still those that change the climate of the board or that affect one or both enemy ranks, removing points per turn. These need to be used intelligently, so as not to waste their usefulness.

12. Watch out for scorch cards

A scorch card is a card that "burns" others. Geralt: Igni is a great example. Not many have this ability, but they do exist, and it is important that you take care of them. Just as you can use this type of card against an enemy, it can also use against you. Therefore, dedicate yourself to studying the scorch cards that exist in the game. Try to predict whether your opponent's deck, taking a look at his Faction, can contain such a card. If you like card games, check out all of Hearthstone's tips and learn how to get started in Yu-Gi-Oh! Duel Links .