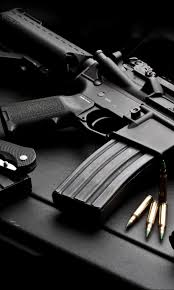 Guns of Boom has 48 different weapons to play. There are assault rifles, sniper rifles, shotguns and heavy machine guns. Depending on the level of the player , he can buy different weapons and improve them. There are two ways to buy: using in-game money, called Gunbucks , which is earned by playing games; or using Gold , which needs to be purchased with real money . Not all weapons are worth the investment. We have divided the list into weapons that you can buy only with Gunbucks and others with Gold, depending on your level. Check out and discover the best weapons to add to your arsenal in Guns of Boom.

Standard weapons that suit all roles and almost all distances. They don't have the precision of a sniper or the large loader of a machine gun, but they get most of the kills in Guns Of Boom thanks to the ease of use and the mobility they allow the player.

At the initial levels, this Assault rifle is the best option. Can be purchased with Gunbucks , does a lot of damage and uses incendiary bullets , which continue to suck your enemy's energy even if he manages to escape the first shots.

Mamba is an automatic rifle, with a good rate of fire and cheap . Use Gunbucks to buy it, without having to spend Gold. It does not have optical sights, but its maximum distance is not great, so it does not need much. It has no special powers, but it pays off with its rate of fire. It is only available from level 10 onwards.

A very powerful shotgun, but it costs 835 gold in the simple configuration. This weapon causes the damage to increase with distance , that is, the further away you are from your enemy, the more damage he does to him.

In Guns Of Boom the maps are mostly in narrow places. As such, the brutal damage of a shotgun is very effective. This is the preferred type of weapon for aggressive players. The player using a shotgun can move quickly, just as if he had an assault weapon.

It is possible to buy this weapon with Gunbucks from level 2. Its special power is the Combo . After the first shot, hitting the next shots does a lot more damage.

A powerful shotgun, which can be purchased with Gunbucks from level 10. It has a special ability to slow your enemies . It is perfect for infiltrations.

One of the most powerful shotguns in Guns Of Boom, but can only be purchased with Gold. The special power of this weapon is Incendiary Bullets . This type of bullets continues to damage the enemy after it has been hit. Hedgehog The best shotgun in the game. Requires level 34 in order to buy it and a lot of Gold. Like the Ranger, its special power is Incendiary Bullets.

Precision weapons capable of striking enemies from a great distance. Despite the low rate of fire, they do a lot of damage and head shots are practically confirmed kill . They are weapons indicated for patient players. Hawk You can buy it only with Gunbucks , it is well worth the investment, mainly due to the special powers: 6X sniper sight and Extra Damage in head shots. Thanatos With a name that means Death, how can you not like this fantastic weapon? Very powerful and accurate, it fires only in sniper mode . One shot one kill.

Heavy weapons, capable of automatic firing with ammunition. Use to keep your enemies under constant pressure and to protect your team. Due to their weight, machine guns slow the player down.

At the initial levels, this machine gun is a good bet to buy for Gunbucks . Its special power is Vampirism , that is, the shots fired at enemies serve to heal itself. Jacky Frost At higher levels, you can also buy Jacky Frost for Gunbucks . More accurate and with much more damage, its special power slows down the enemy. It is only available from level 28 Gross A damage-causing machine that doesn't stop for anything or anyone, but can only be purchased with Gold. Bruta manages to damage an enemy that is escaping, making it slower, as its special power is Synergy .

Although there are pistols and knives that do a lot of damage in Guns of Boom, their use is more accidental than on purpose. This is due to the game's own mechanics: it is impossible to use a pistol without its ammunition running out and a knife is only for melee attacks. For this reason, many players avoid wasting Gunbucks or Gold on these weapons. However, if you want to improve your arsenal down to the last detail, try the following weapons, just to buy with Gunbucks . Eagle Copy of Desert Eagle, common to many games. Very powerful for situations where the important thing is to detonate your enemies. Sudoku The best knife you can buy with Gunbucks . If you managed to get so close to an enemy, this knife will make you regret it. In this list, we do not include level 34 weapons, with the exception of the Porcupine shotgun. Weapons of this level are obviously very good, do a lot of damage and have very good range. However, they are for experienced players with a lot of Gunbucks and Gold to spend. Now that you know which weapons to invest in, learn 10 simple tips to start winning many Guns of Boom matches.