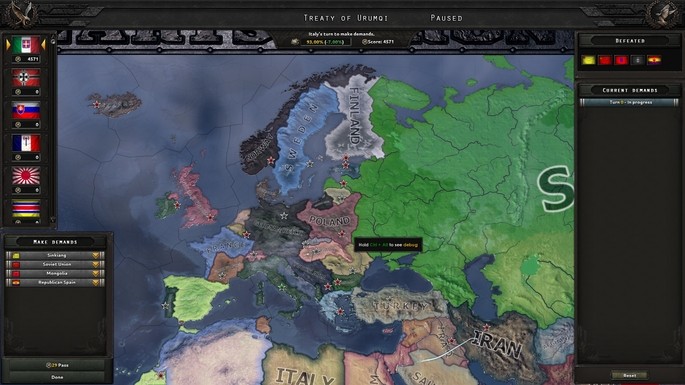 Hearts of Iron 4 is a fantastic game! But of course the gaming community has managed to make it even better by creating mods for the title. In this article we have separated some of the best and listed them, with the respective links for you to download and install them whenever you want!

DOWNLOAD The first mod brings a kind of anarchy to the game. Some rules imposed by history are no longer enforced, which means that you can see Hitler being deposed by the German people themselves! This creates a lot more possibilities in HOI4, since now you don't have to follow historical events at all.

2. The Man in the High Castle

DOWNLOAD The Man in the High Castle is a famous TV series based on a book by Philip K. Dick. The mod brings all the content of the book and the series into the game: imagine that Hitler and his allies had won the war, dropped an atomic bomb on Washington and dominated the United States. Interesting, isn't it?

DOWNLOAD In HOI4, artificial intelligence controls the peace negotiations. The terms are defined by the computer, and you are only responsible for signing at the end. The modification in question gives you the power to interfere in all processes, which makes this important aspect of the game much more real.

DOWNLOAD A simple mod , but it helps to immerse the player even more in the climate of war. There are more than 600 songs added to the game, all with themes and melodies to make your experience more dramatic. You will notice that historically they are not quite correct, but nothing that gets in the way.

DOWNLOAD How about playing For Honor differently? This mod turns HOI4 into a battlefield between Vikings, Knights and Samurai. Choose your faction and start expanding your empire across the planet!

DOWNLOAD For Brazilians who play HOI4 this mod is indispensable. See how historically all the steps of the Dictatorship in Brazil, starting back there, with the overthrow of Getúlio Vargas. As you can imagine, the game will be full of unexplained twists and campaigns full of blood.

DOWNLOAD Important change, as it allows players to enter the Cold War, successor to World War II. The world is divided between East and West, it is up to you to choose your side and decide who will rule the planet!

DOWNLOAD For those who like Ancient History, this mod is one of the coolest. There you can control and expand the Roman Empire from the beginning. Prevent Rome from falling into the hands of barbaric invaders and change the courses of human history!

DOWNLOAD Of course, the Great War could not be missing! If you want to experience the conflicts between the Triple Entente and the Triple Alliance, great! Choose your side in this fight and try to win in what was one of the bloodiest military clashes in humanity.

DOWNLOAD He doesn't like For Honor, but he loves Skyrim! Here's a mod for you! This modification is super simple and allows you to play in command of this Cyrodil region. Unfortunately it doesn't have as much content as it could have, but it is still quite fun in its own way.

The mods are the property of their creators and developers, and is therefore important to consult the recommendations of each modification. When going to the download page of the files there are explanations on how to proceed when installing. If necessary, there are questions and answers on the websites that can answer any questions. We point out that these mods are not supported by the HOI4 developer, Paradox Development Studio. So any problem you have with the installation of these files is not the responsibility of the game's creators . We advise you to back up your save file before any modifications are made. Now that you've seen the mods, check out the HOI4 cheats too! Learn great tips in our HTML blog about web development. Learn how to implement useful features for your website!