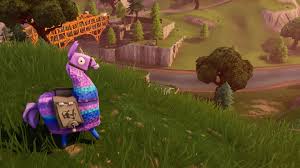 All Fornite Battle Royale players have encountered at least one Llama in their adventures. Thanks to their loot content, they are highly coveted by any player. Llamas can be found in any Fornite Battle Royale mode and only 3 are generated per game (except in Playground training mode). Unlike Chests and other ground loot that appear in fixed locations (although random), Llamas can appear in many locations. Check our map and find out where you are most likely to catch a Llama.

Areas most likely to encounter Llamas

The areas marked in red are the areas where there is a greater probability of catching a Llama, according to our experience. A lot of attention, because we are talking about "probability". Remember that only 3 Llamas appear per game and they can appear anywhere. Do not jump on purpose in these areas thinking that you will catch a Llama in the first moments of the game. The Reddit user Overwatchero4 has compiled a known map of the areas most likely to catch Llamas, which you can also consult. But, as has already been said, this information is about probability and cannot be taken for granted. Llamas can appear in many different places, even on top of trees! So, open your eyes wide and don't forget to look everywhere.

After all, what does the Llama have?

As we have already said, taking a Llama is very advantageous. A Llama has: To open a Llama, there are two ways: break or open it like a normal chest. Breaking the Llama is faster, but louder. Opening a llama is much slower than opening a chest, but it is silent. Choose according to your situation. And proceed with caution, as a Llama is always valuable and other players may have the same idea as you. The Fortnite map is always changing. Discover the new changes on the map!