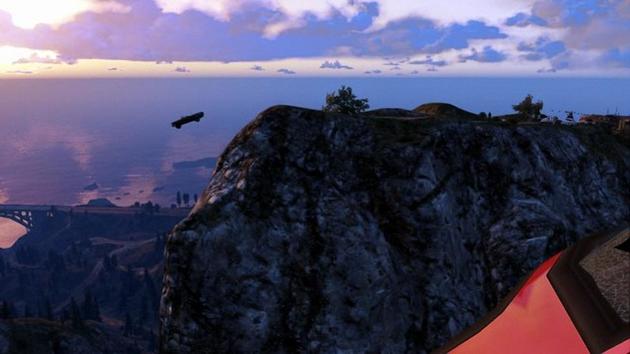 GTA V is one of the most loved and most played open world games in history. With an engaging and competitive multiplayer mode , it stays alive on the consoles and computers of millions of players. But it is the single player campaign of this game that still arouses the curiosity of many gamers, with its mysteries and secret places to be discovered. We know that even the most addicted to GTA V can have some difficulty in unlocking all the secrets of the game. So we have brought in this article 16 secret places that every fan of the title needs to visit at least once. In addition, there is a bonus at the end. So start your car engine, put the coordinates on your GPS and get ready to hit the road!

Cliff of the film Thelma and Louise

The first secret place is an easter egg from a very cult film from the 90s. The most unsuspecting may think that this has nothing to do with GTA , but it does. In this film, two women are fleeing the police in a frantic car chase. They then decide to jump off a precipice to avoid being arrested by the authorities. Does this spoiler remind you of anything? Yeah. This final scene of the film was included in the Rockstar GTA V . If you use any type of transport or flying vehicle, go to a mountain near Raton Canyon in Chiliad Mountain State Wilderness. You must be there between 7 and 8 pm. If all goes well, you'll be able to see Thelma and Louise's car jump off the cliff, just like in the cinema. Where to find Thelma and Louise: Go to Raton Canyon, in Chiliad Mountain State Wilderness, between 7 and 8 pm

Alien frozen under the bridge

Here you need to be aware, as this place is only available at the very beginning of the game Prologue. While you are driving, the game will send you to cross the train track. Do not do it. Turn right, get out of the car and walk under the bridge you would pass over. What will you see? The monstrous creature from the Alien franchise frozen under water. Where to find the frozen alien :

Face on the mountain

We are going to Tongva Valley. Amid all the nature present here, you should find a cave. It is necessary to explore with great care and patience to find it. We promise, however, to be rewarding, as you will end up finding part of a mysterious spaceship. Where to find the spaceship part:

Easter egg from the movie Where the weak have no time

Anyone who has seen this film knows that it shows that crime does not pay. And GTA V makes a point of showing this to the players with the possibility of you visiting one of the final scenes of the film. If you go to the west side of Monte Chiliad, you will see that a deal, probably for drugs, did not go very well. There will be lifeless bodies scattered around the site, with some abandoned cars. Only one person will be alive, just like in the movie, a man who will warn you not to pick up the suitcase full of money that is nearby. We advise that it is at your own risk to choose to take it. Where to find the scene where the weak have no time : On the west side of Mount Chiliad, although you may not always see the scene.

To reach that sunken tank you will need a vehicle that can submerge in the water. Once you are in possession of one, go east to Humane Labs. When exploring the waters of this region you will find a number of military items. Among them is a tank. Where to find the submerged battle tank:

This place is very useful if you can find it, as it stores some items that may interest you, such as weapons and ammunition. It is in the Great Chaparral section, a place that is practically absent from buildings and people. There you can find the entrance to an old and abandoned mine. To enter, just use any type of explosive weapon on the door. Where to find the mine entrance:

This secret place in GTA V is an easter egg that will only be understood by those who watched the Lost TV series . Once you have a submarine, you must go to the east end, at San Chianski Mountain Range. Right at the bottom of the sea, you will find a hatch, which is a perfect replica of the hatch shown on the television program. Unfortunately it is impossible to get close, as the depth can destroy your submarine. Where to find the Lost hatch :

Los Santos has more than one plane submerged in the ocean. If you travel to the peninsula in Paleto Forest, you should go close to the parachute jump point. It is northwest of the peninsula. When searching underwater, there will be a submerged airplane. If you go south of Murrieta Oil Field you will also find an aircraft under the water. Where to find submerged airplanes:

Of course, GTA V couldn't do without its Snow Man . Go to La Mesa, and there you will find a deposit from the Fridgit company. Enter the warehouse and you will see a series of blue doors. One of them is half open and, if you look very carefully through the opening, you will find Snowman watching you. Where to find Snowman:

This secret location is only available in single player mode . To find it, you must go north from Alamo Pier, leaving North Calafia Way. Once you arrive at your destination, you will find Jesco White, one of the broadcasters in GTA V , with a portable radio. He will be doing a characteristic dance that Jesco does in real life. Where to find Jesco White's hut:

This control tower is not quite secret, as it is located in Fort Zancudo, a location where you will eventually go throughout the game. When you get back to that place, instead of going down to the underground labs, just go up the tower. Up there is a Minigun that respawns all the time. It will be useful, as this place is heavily protected. Where to find the control tower: Just go to Fort Zancudo. Instead of going down to the labs, go up the control tower.

There is a poem written on a rock in Sandy Shores. The writer was a serial killer known as Infinity Criminal. This poem has tips for finding the bodies of eight victims. And indeed they can be found. They are located in a group of islands north of Paleto Bay, submerged in the ocean floor, wrapped in plastics. Where to find the bodies of the victims of Infinity Criminal: Go to the islands north of Paleto Bay, as shown in the image above.

We separate this bonus because UFOs are part of GTA mythology . In fact, it is possible to see and even interact with some, as long as you have the necessary equipment for this and have fulfilled some requirements. Confra below which are GTA V .

The first one you can only see after completing 100% story mode. But it is not quite in a secret place, since it is in Mount Chiliad and you have already been there if you got to that point in the game. Once you reach the top of the hill, you will see a huge alien ship flying over the place. It is possible to view it using specific equipment for this, which are available on site, or using a sniper . If you want you can shoot the object with all its ammunition, although nothing can knock it down.

Sandy Shores' UFO also requires 100% completion of the game. Once that happens, take a helicopter to Sandy's hippie camp , where there are alien symbols on walls. Fly as high as you can and hopefully you'll be able to see the ET ship. There is even an open door on the object, with a light projected outwards.

This is the only alien ship that does not require the player to be 100% complete in story mode. To find it, you must go north of San Andreas, exactly north of Procopio Beach. As soon as you dive, you'll see what is probably a UFO that landed in the sea and sank there. There are some good mentions throughout the history of this ship. The online jsBeautifier program can organize your JavaScript code, even if it is unreadable.