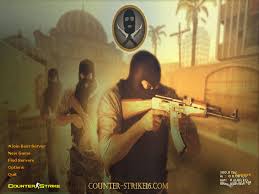 Bot add t add bot to the terrorists bot add ct add bot to the counters mp autoteambalance is so that there is a difference of more than two people compared to the other group either ct or terrorists mp limits is to put any amount of bot for a team without having to put the others also cl lw 0 to narrow the sight and do it that does not deviate mp starmoney 16000 gives teams 16,000 silver
Reply
+70

Bot quota (number of bot you want to add)
Reply

CHANGE THE COLOR OF THE LOOK TO BLACK
Reply

How to make bubbles in the water + Tricks

To make bubbles in the water to have a little fun or blind with bubbles to another player, you have to buy a smoke grenade and throw it into the water.
Reply

To place the silencer quickly you just have to have a weapon that carries a silencer, then press secondary click and before you put the silencer change weapons quickly and then return to the weapon and you will have the silencer on.
Reply

Change the names of the bots + Tricks

1st step: Go and enter the folder where you have the counter strike. 2nd step: Enter the "cstrike" folder. 3rd step: IMPORTANT: Make a backup copy of the "BotProfile" file (paste the copy where it is best available, and do not forget where it is) 4th step: Once done the 3rd step, enter the file "BotProfile" (open the file with NOTES BLOCK). 5th step: Once inside the file, it will say this "This database defines bot" personalities ". / / Feel free to edit it and define your own bots" (but in English) 6th step: Now go until you get where you say "These are the individual bot profiles, 7th step: Well here the BOTS names begin, to change them just delete the name of the bot you want to edit (be careful you just have to delete the name) and put the one you want. EXAMPLE: Elite + Cliffe Skin Rifle = 1 VoicePitch = 95 erase the name and it would look something like this: Elite + Rifle Skin = 1 VoicePitch = 95 and now put the name you want: Elite + DIOS-DE-LA-GUERRA Skin Rifle = 1 VoicePitch = 95 (NOTE: never write the names with space eg: the best, they should always be without space eg: the-best) Then I will tell you the difficulties in which the bots that changed changed. EXAMPLE: If you look at the names of the bots you will see that at the beginning (before the names) there is the difficulty. EXAMPLE: Elite + Cliffe Rifle ------> Elite: it is the difficulty + Rifle: these are the weapons the bot uses but I will only explain the difficulty ... Elite: they are BOTS TOO AGGRESSIVE AND TOO CERTERS Expert: they are BOTS VERY AGGRESSIVE AND VERY CERTEROS VeryHard: they are BOTH HALF AGGRESSIVE AND HALF BATTERIES Hard: they are BITS SOMETHING AGGRESSIVE AND SOMETHING CERTERS Tough: they are bots NOT SO AGGRESSIVE AND NOT SO CERTEROS Normal, Fair, and Easy: they are already the dumbest xD Entonses notice the difficulty that changed to the bot and in that difficulty will appear Elite and Expert: they appear in the Expert difficulty VeryHard and Hard: they appear in the Hard Toung difficulty : they appear in the Normal and Hard Normal difficulties : they appear in the Normal Fair difficulty : they appear in the Normal and Easy Easy difficulties: they appear in the Easy difficulty THAT IS ALMOST EVERYTHING: After changing the Bot names enter the Counter Strike and create a new game with the bots on the difficulty you put the bot names (EXPERT, HARD, NORMAL, EASY). When entering the counter, press the ° button to open the console and if something like ALL BOTS DIFFICULTED appears (I don't remember what else it was) that means you did something wrong. and the bots will not enter. IMPORTANT NOTE: This trick is only for playing your own while you have the modified BotProfile you will not be able to enter other servers you can only enter other servers with the original BOTPROFILE (for that backup) then make a backup copy of YOUR BOTPROFILE to when you want to enter and play alone again. This is a trick just to have fun alone or when you don't have an internet connection or when you're bored.
Reply
April Fools Day is coming. Prank your friends opening a never ending fake update screen on their computer. Sit back and watch their reaction.