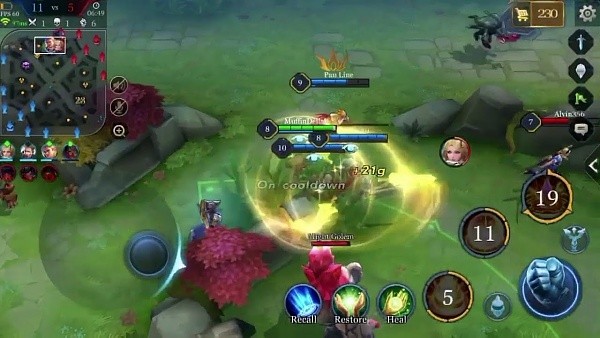 While not popular in Arena of Valor , support heroes are critical to winning matches. In addition to weakening opponents, it is these characters who will strengthen and keep the rest of the team alive. Check out the basics of the support heroes' gameplay and the characteristics of each.

Whichever character you choose and your primary role (healer or tank), these are the basic goals and behaviors of a support hero in Arena of Valor .

In this first phase of the game, the support heroes must go to the lane where the Abyssal Dragon is located so that they can assist the team in fighting the dragon. Killing this monster is a priority to earn lots of gold and XP that will help your team for the rest of the match. Stay in that lane until the Dragon and finally the Tower fall.

Second half of the match

At this stage of the game, now that the Towers are falling, support heroes must help their allies in other lanes . Therefore, you must always be aware of the map to know where help is needed. Don't forget that enemy junglers are looking for opposing players to walk alone, so be extremely careful when moving around the map.

In the final phase of the game, support heroes are normally quite powerful and it is their job to strengthen their allies and weaken their opponents. Make use of your control skills to facilitate the deaths of teammates and protect them, as they will be able to achieve victory by decimating the opposing team.

Learn about the game's four primary support heroes and their most powerful and effective skills to assist the team towards victory.

Alice is a very powerful support heroine, who makes an important contribution to her team winning. Using her Friendship ability, she increases the speed of her allies , making it even more difficult for enemies to escape. Try pairing Alice with a wizard to quickly annihilate enemies by using the Tantrum Girl ability , which decreases your opponents' magical defense and slows down their movements.

Chaugnar has access to powerful protective abilities that, along with defense items and archangels, make him almost invincible. It is particularly strong in freeing itself from control effects , since its own Chaos Protection ability has an extremely fast reload and can therefore be used regularly. In addition, Chaugnar manages to slow down opponents with Energy Surge , while increasing his own speed with the passive Chaos Herald , causing the enemy team to panic.

Like most support heroes, Lumburr reaches his full potential close to his allies. He is particularly strong using his skills in open space and in team battles. His Earth Breaker ability manages to slow down enemies to such an extent that, along with a coordinated attack in that area, he can eliminate several opponents at the same time. In addition, his Protection passive ability keeps the ally with the least health always protected by a shield that absorbs the damage suffered.

Peura is a discreet character. In addition to not causing great damage, your skills may go unnoticed during the match. However, she is a support heroine with great use when close to her allies. Using Light of the Cure , Peura is able to heal herself and her closest allies while increasing attack speed. Another very useful skill of this heroine is the Barrier . With this power, Peura both strengthens his allies and weakens his enemies in the zone of effect. Meet the 9 best Heroes of Arena of Valor!