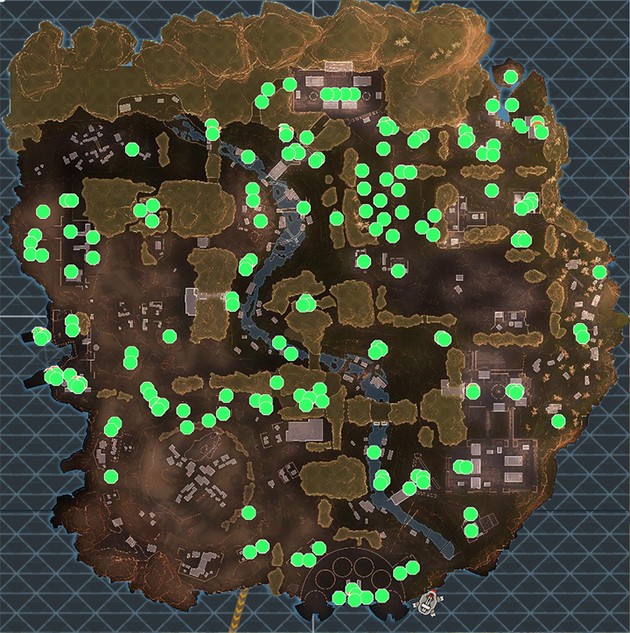 The first map of Apex Legends is called King's Canyon and has different zones that you need to know to be able to loot quickly and, mainly, to avoid ambushes. The map itself is much more rugged than in games of the same style, with very deep valleys, rivers, mountains, military bases and varied buildings with very different biomes. Check out the most advantageous and the most dangerous zones to land in King's Canyon.

Despite the marked locations, there is loot across the map in unnamed zones. There are two random locations in every game that are of interest to you: the Dangerous Area and the landing area of the Supply Ship. In addition to these two marked zones, there are also respawn points marked in green that can be used to revive your teammates. These points are fixed. Check out our super Apex Legends character guide!

These are the places where loot containers exist. Remember that, in addition to the containers, there is a lot of loot in several buildings across the map, despite being the most common equipment. Naturally, areas with fewer containers will be calmer. In theory... Check out the top 5 team compositions from Apex Legends!

This place could be called the Fixed Dangerous Zone, as it is a zone that calls many players for its loot . It has a good position on the map with exits that are easy to ambush (and ambush) and lots of loot spread across different buildings, tunnels and warehouses. If your squad decides to jump there, get ready for intense combat. As it is a wide area, the best option is to move quickly between buildings and, inside them, check the corners and blind spots.

In the southwest area of the map, this location has relatively few containers, but there is a lot of loot scattered throughout the buildings. Use the cables to climb quickly and maintain your vigilance using the high walkways. The best feature of this location is its security. It is an ideal place for novice players , as it is not very popular, which increases their chances of survival. There is a respawn point right in the center, which is very advantageous if a teammate is shot.

Despite its name, this place is relatively quiet, with some loot scattered throughout the city's buildings, but few containers. It takes patience and speed to loot, but it is a safe place, ideal for those just starting out. Use the stone skeleton to keep an eye on the city below or to move faster. The city itself has many loot-worthy places worth visiting. Despite being a relatively safe and unpopular area, the terrain is ideal for ambushing. Keep your finger on the trigger.

Right at the northeast end of the map, there is a giant complex with a lot of loot and some dangers. It is a wide area, with good spots for snipers with good aim. Despite the loot being very fragmented, there are many containers scattered and many ziplines for fast travel between different locations. Although you don't take damage from falling in Apex Legends, this fact is irrelevant if you fall into the river. We found this out in the worst way, believe me. Although the area has a lot of loot, it remains little visited, making it an ideal area for beginners. Your position away from the center of the map will possibly be the main reason. Now that you know the calmer and more intense areas of the map, learn how to survive with some essential tips to stay alive and learn which weapons are the most effective in Apex Legends !