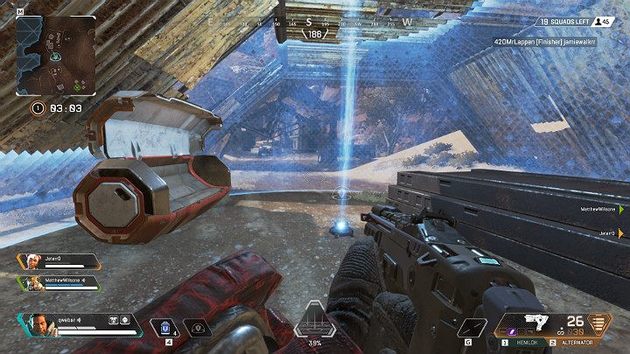 Check out the best team compositions for Apex Legends below. The game stands out in the battle royale genre as each Legend has specific skills and characteristics. This leaves room for various team combinations, one better than the other. Thinking of you who want to get ahead in the matches, we analyze the skills of each Legend, and how they can be combined with others to form the best possible teams. Check out!

The most aggressive composition of the game. This team is for players who like to jump in the middle of battles and keep as much pressure on their opponents as possible. If the attack is well coordinated, it is possible to end an entire team without taking much damage. For starters, the Bangalore Smoke Launcher is one of the most versatile skills in the game, and it blends perfectly with the Bloodhound Hunting Beast. While his opponents see nothing in the smoke, Bloodhound finds them and takes advantage. Wraith or Pathfinder complement the team with their high mobility, covering the exits of the smoke and chasing opponents who try to reposition themselves. In addition, the two can serve as bait, (mainly Wraith with his evasive abilities), for Bangalore and Bloodhound to prepare the attack. Apex Legends: super character guide, skills and tips!

The opposite total of the previous one, this is the most defensive composition of the game. This team is much stronger in closed terrain, preferably with buildings around. To begin, Pathfinder must use his passive to find out where the next circle will be. With the information, the team should anticipate and mount a defense prepared within it, preferably close to another research flag. The Gibraltar Protection Dome must be used in conjunction with the Lifeline Healing Drone. So, whenever your team is in trouble with life, the team can get into the bubble and heal easily. The Lifeline Supply Capsule should be used as much as possible to keep the team well equipped. Whenever the capsule is invoked, Gilbratar can use the bubble to ensure a smoother looting. In addition, the trio must take advantage of Lifeline's healing and save their healing items for times of emergency. If the team has a Caustic instead of a Pathfinder, the defense will not be able to anticipate (which is not so bad), but it will be more effective with gas traps. Apex Legends: check out the best tips to master the game!

One of the most balanced compositions in the game and certainly the easiest to play. The three Legends of this team are the most friendly for beginners. Bangalore is undoubtedly the most versatile character in the game. Your skills are very useful in both offensive and defensive ways. Lifeline and Gibraltar will serve as support for the team, using their defensive skills to ensure that Bangalore can play its role in the best way. This team allows the combo of supreme from Bangalore and Gibraltar, capable of causing a lot of damage in the area. A good way to hit the combo is to mask your skills with Bangalore smoke or baiting opponents with the Lifeline Supply Capsule. Apex Legends: know all the weapons and their damage!

This composition is no longer simple to use, but it is one of the most fun. To exploit their full potential, players need to know the Legends' skills well and use them in a coordinated manner. All the characters on this team are evasive in some way. Wraith can move quickly, Mirage creates her illusions and Caustic obstructs the opponents' view. So, fighting this team can become very confusing and frustrating. Both Mirage and Wraith are perfect baits to lure players into Caustic's traps. Thus, coordination and constant movement is necessary. Caustic must control the terrain with his traps and ensure that the other two are even more difficult to find. In addition, Caustic can set traps at the exit of the Wraith portal to catch incoming opponents. Apex Legends: discover the secrets of the map and where to loot!

The truth is that any team with Bangalore and Bloodhound is good. These two Legends have the best synergy of the game since one smokes smoke on the scene and the other sees through it. The strength of this team is that Caustic also obstructs the scene with its gas. So, if the Smoke Launcher is cooldown, the gas can do the job. Gibraltar can also obstruct opponents' views with its Defensive Bombing, but less effectively than others. Apex Legends: check out the requirements and how to increase the game's FPS! Apex Legends vs Fortnite: see which Battle Royale is right for you! Use the online HTML cleaner website to easily edit and convert the markup code for web pages!