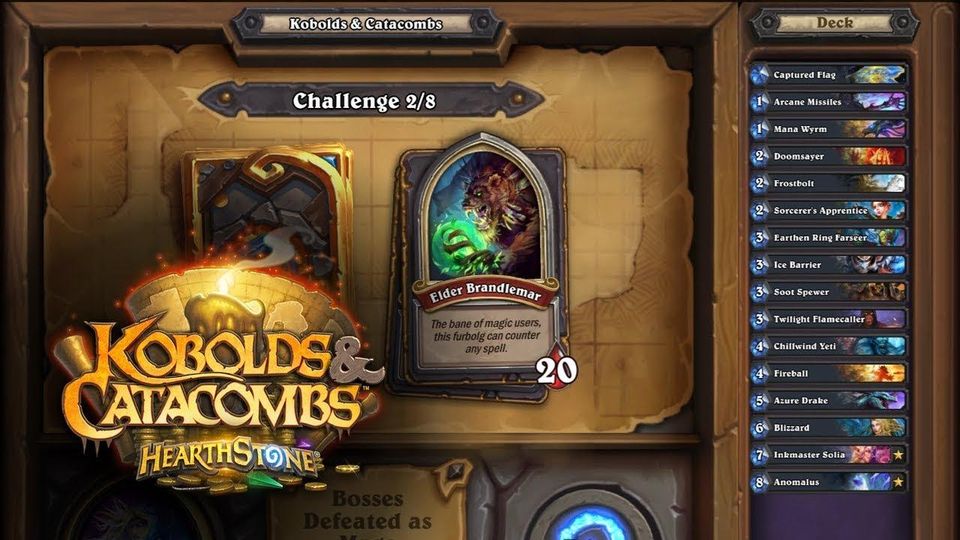 This Hearthstone expansion goes directly to the catacombs full of treasures and mysteries, protected by the Kobolds. 135 new cards and very cool news were released that will change the meta game.

If you're already playing with the new cards, check out the best decks in this expansion here! Meet the new expansion O Bosque das Witches!

Have you ever wondered what it is like to play Total Infestation and, after drawing 5 cards, have 10 mana at your disposal again? With Rama from the World Tree this will be possible. In cases where your opponent destroys the weapon before that, you will be left with 10 mana crystals. Remember that you can also break the weapon by putting a new weapon into play. As there is no silence in the weapons, it looks like a card with enormous potential. Bifurcation allows you to draw a card on the 4th turn and grant +1 attack on the minions, which is very valuable for an agro deck. Receiving 6 Armor can be used as a last resort to survive another turn.

Kathrena Fiálgida resembles Aya Patanegra, but she is a little expensive. However, if you select Beasts well from your deck, you can take Rei Mó and do a lot of damage. With Crushing Walls, you will destroy 2 minions for 7 mana. It is very expensive, especially when the target is not chosen.

Aluneth, at first glance, looks like an expensive weapon for what he does. It doesn't seem very useful in Mage who usually draws cards easily. Think that in three rounds you are going to draw 9 cards, isn't that too much?

The first scenario that comes to mind is to see the Dragon Soul working with Lyra, the Solar Prism in combination with the Radiant Elemental. There, two dragons can easily enter in one turn. Quebranoite has everything to be an essential card in the next dragon deck. Normally, a priest's deck is slow and this card will be very cool to stop aggressive decks. Clearing the table in turn 4 has enormous value for entering the mid-game, where the Priest begins to be strong.

Shaman 8 mana is too expensive to make you dependent on RNG. It is true that you can use the Rune Spear the incoming turn, but it is still a choice of 3 spells that will be cast on random targets. It doesn't look like you're going to play.

The Seals generated by Rin, the First Disciple, are very slow. If you ever manage to play Azari, the card that wins on the 5th Seal that destroys the enemy deck, it will probably already be in fatigue. Warrior

Marin the Fox was the card offered before the expansion came out to amuse the crowd. Although the Treasure Chest offers cards with a lot of value, it doesn't look like this is going to be a competitive card, because it is very slow. Zola, the Gorgon has a low cost and can be useful for copying cards in the same turn as they are played. The Golden copy is an original idea just to make fun of the crowd. Malevolent Summoner can be useful on decks with only high spells. For 6 mana, you can put two minions into play: one 4/4 and one that can be easily bigger. The Carnivorous Cube is a very interesting card to play with Last Breath cards. Imagine the combo with the Blood of the Elder to create The Elder, the minion 30/30. The weapons will be a guaranteed presence in the next expansion and Scavenger Kobold will allow you to use the weapons again. If you return one of the legendary weapons to the hand, you can gain a lot of advantage.