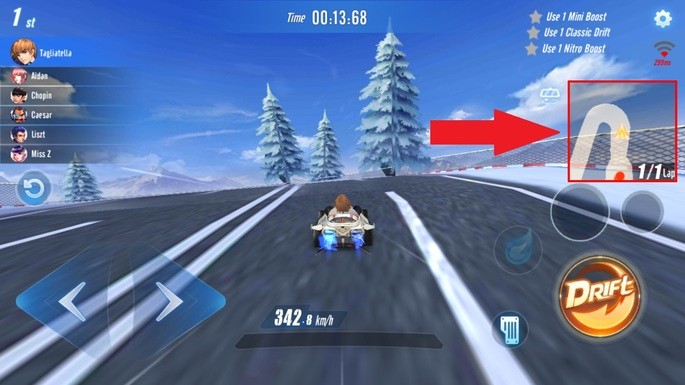 Speed Drifters is the new game from Garena, creator of Free Fire Battlegrounds. In this car game, you will compete in 8-player racing and full of action, items and skidding. The game also has many cars and enhancements to be unlocked, so this game will definitely take your time. Check out 8 essential Speed Drifters tips below!

The first step you must take in Speed Drifters is to configure the controls. In the options menu, under "Control", you can customize them to suit your style. If you are playing on a mobile phone or tablet, choose one of the three modes shown in the image. Once selected, press the "Set" button to move or change the position of the buttons. If you play on an emulator, it will also help to set up comfortably, since you will have the important buttons on the screen. Then there are two options that are essential in Speed Drifters: Brake Button and Automatic Mini Boost. You must have the brake button activated, but avoid using it too much in racing. In this game, speed prevails! Auto Mini Boost, turn it off. It is best to learn how to use it manually as this can make you lose control of your car.

2. Know the clues and observe the minimap

If you want to be the most successful Speed Drifters runner, take the time to get to know the circuits. There is a good variety of maps, with their different ramps, curves and turbos. You must pay attention to the first times you go through these circuits to improve your time with each lap. When you play a circuit for the first time, look at the minimap a lot. It will tell you when a curve is approaching and where some turbos or obstacles are located on the map. In addition, the minimap is also useful to know at all times the position of the players next to you. If you see an opponent right behind you, you can take the opportunity to block him When repeating the same circuit, look for ways to reduce your lap time. You can always improve the way you take each turn and find out which side of the path you prefer to drive on. There are some places with turbos that are very attractive, but they are not always the best way! You can also see tips for each circuit in the training menu.

3. Use mini boosts, nitros and drifts

In the early hours of the game, you can forget to use boosts, nitros and drifts, as you will probably be busy driving, getting used to the controls and avoid hitting walls or opponents. But pay attention soon !! The game offers powerful tools to become victorious in each race, and it is convenient to use them. To start, boosts can be activated on the following occasions: Avoid activating the automatic boost option. This is because it is almost always better to wait half a second before using it, to allow time to put the car in the right direction. However, don't wait too long to use the boost as it will disappear in just two seconds. The same is not the case with nitro, as you will store it until you use it. You can receive up to two charges of nitro and they give you the same speed bonus as boosts. These are the best situations for using nitro: Finally, it is important to learn how to skid. Take advantage of each turn to use the drift and get boosts and energy for the nitros. There is no other way to win in Speed Drifters!

4. Activate items at the right time

If you like Mario Kart, Crash Team Racing and the like, you'll love Speed Drifters' “Item Solo” and “Team Item” modes. In both you will have the chance to collect items on the track to use both offensively and defensively. Solo mode is a standard race in which everyone plays for themselves. In Team mode, players participate in groups of 3, and the first to finish wins for the entire team. In both modes, we recommend that you look at the section marked on the left, as in the image above. There you will find crucial information about when they attack you or what items your partners have. When you receive an item, do not use it immediately. Sometimes it is better to wait to counterattack. Also wait to use the items at other more favorable times. Some examples are: Finally, a useful trick for both item modes: try to skid right between two item boxes. That way there is a chance that you can get two at once.

Both modes are accessed from the main menu and are perfect ways to train in Speed Drifters. Both in the campaign and in training, the game will ask you to meet the requirements or use specific techniques to complete the levels 100%. It is worth spending time in the training mode because it will advise you on boosts, nitros and drifts. Even if you have completed these phases, it is useful to return from time to time to practice and master all the techniques. In addition, every time you complete a training, you will receive coupons as a prize. They will help you buy cars. In campaign mode, in addition to gaining experience, coupons and gold, it is the best place to get to know the clues. You can repeat them until you get tired as they are a perfect environment to learn without fear of losing to people.

6. Choose your ideal car and upgrade it

There are many cars in Speed Drifters that you can win or buy and none are like the other. So don't choose your cars based on their appearance, but on their unique attributes and characteristics, if you have them. The attributes are as follows: Take time to analyze each car's game attributes. After a while of leveling up you will notice that every advantage is needed to win. Choose those cars that best match your style of play. A final detail about cars in Speed Drifters: Class A cars have unique characteristics such as, for example, improving skidding, mini boosts and nitros, among other things. In addition, each car can be improved in the “Mod” menu in the Workshop. To do this, you will need Tech Points, which can be achieved by completing missions and winning races. In summary, choose your favorite car and take care of it with improvements. Make your car the most powerful in the game!

7. Use your skills and train your pets

When you reach level 10 in the Speed Drifters account, you will have access to both your pets and your character's abilities. However, to unlock the skills, you must first obtain the skills in training mode. Once you get the skills and pets, try to spend your money and coupons to improve them. Both will help you with your racing performance, be it increasing your speed, improving boosts, etc. The difference between skills and pets is that the former work as passive improvements to your character. In other words, they are permanent. On the other hand, pets also give you improvements, but with the disadvantage that, for each race, you can only choose a specific pet. There are three ways to equip a pet: If you equip a pet for only one type of race, you can have a different one equipped for the other mode. Otherwise, you will have the same pet for all Speed Drifters races. Choose well which one you are going to equip and upgrade, and make sure it fits your style.

The last tip is actually a reminder for anyone looking to advance in Speed Drifters: log every day! Entering the game will often give you bonuses in the form of gold, coupons, experience, tech points, etc. It is also important to complete daily and main missions to obtain all possible rewards. Paying attention to missions, events and trophies will help you unlock all the game's content. That means having more cars, better skills, trained pets and a character dressed in style. These are Speed Drifters' tips for competing success! Fasten your belt, hit the nitro and good luck! Discover the best cars of each category in Speed Drifters!