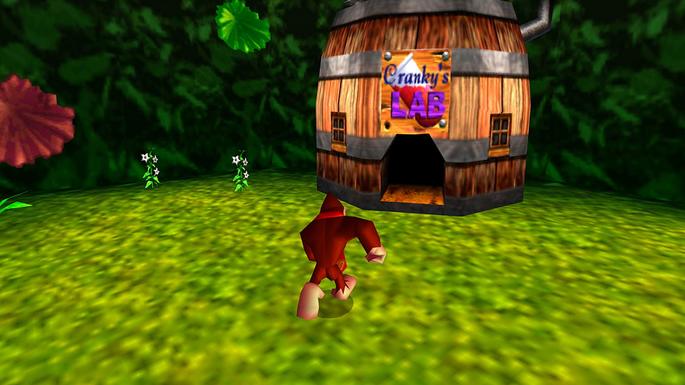 The N64 was one of Nintendo's most beloved consoles! It may not have been the best seller, but it has some of the company's best games. So much so that several have received awards and even remakes for more current generations. So in this article we will miss you and list the best Nintendo 64 games!

Let's start with the most controversial game on Nintendo 64. Conker's Bad Fur Day was innovative in terms of theme and graphics. Because it was released in 2001, it visually approached the first titles of the new generation. On the subject, you had a squirrel drunk and that only swore. He and his girlfriend got into trouble after a night of drinking. The game was pretty clueless, and that's exactly where it was successful. You controlled the Conker squirrel in several isolated areas, accessible on a map. Within each stage, I carried out missions to help other characters. Always armed and ready to deliver punches and kicks to enemies. In fact, all the characters had a depraved, irritated personality that did not match the "family" style of the N64. Still, it worked well, mainly because the game was very simple and easy to be played.

Paper Mario is a great RPG released for the Nintendo 64. It had a childish mood, very characteristic of plumber's games, but with an interesting adult acidity. The relationship between the characters in the paper world, in 2D, and those in 3D was explored in a very cool way. Apart from the colorful weapons and blows that marked the series. This game set a high-quality standard in how Nintendo's RPGs would function later. Such as the combat system and puzzle solving , for example.

Many Star Wars games were developed for Nintendo 64. After all, at the time George Lucas' second trilogy was on the rise! This game, completely inspired by the race sequence of Episode 1, was one of the most successful among players, among fans of the franchise and even among those who did not like Star Wars. In the game you can choose any of the drivers that appear in the film, as well as others created exclusively for Star Wars Episode 1: Racer . The tracks are the most varied, taking place on several planets. The pods could be destroyed in collisions, and can be repaired in the race.

Star Fox 64 repeated the success of its predecessor to the SNES. The N64 version was super innovative, mainly in relation to the difficulty scheme of the phases. In some you had 3 difficulties in one, which brought a super complete and challenging experience to the players. The Campaign Mode was awesome, but it was the battles in multiplayer that made the game go away. At the time it was voted one of the best multiplayer of all consoles.

Pokémon Snap was not very popular in the West, although it was a success in Japan. Even so, there were many people who played it in Brazil, because the idea was quite different: photographing Pokémon to send to Professor Carvalho. For that, you controlled Todd Snap. It has already appeared in the cartoon, and the game was released right around the time that it happened. The photo mechanics were really fun, mainly because you got points for the quality of each photo. The goal was always to reach the Excellent. The problem was that at the time, only 63 Pokémon out of 151 existed. In addition, the game was small, with only 7 stages.

Today the party genre is one of the most played on Nintendo consoles. In 98 the first Mario Party made a huge revolution in the way people played cooperatively. Like Mario Kart , Party was responsible for bringing together friends and families around the console, having fun and fighting at the same time. One of the greatest features of the game was the boards and puzzles . Stealing stars from Boo or losing them to him was both frustrating and funny, something that today brings back fond memories to children of the 90s.

Donkey Kong 64 was a good surprise when it hit the market. It has been completely redesigned for the new generation, especially since it left 2D aside to welcome 3D. With the power of the N64, Donkey Kong and company gained new moves, maps and huge levels, in addition to 3800 collectibles for the player to acquire. Another thing that caught the attention was the Rap of the intro. Who doesn't remember that? At the time it was something that captivated many players, and is still remembered today as one of the coolest parts of the title.

Diddy Kong Racing was no longer a copy of Mario Kart . The racing version of the DK series brought many innovations to the genre, some that were even used in future Mario games. One is the very long Campaign Mode, which put players immersed in history for quite a while. Besides, it wasn't just the car you could use. Float and plane were also options, which made racing very dynamic, forcing players to return to them more than once. Another very good point was the multiplayer for up to 4 players.

Super Smash Bros. breaks the beat on current consoles, but in 1999 it was a surprise. The announcement of the game came almost along with the launch of the game itself . At the time it was a success, as it brought something that was missing from the Nintendo universe: a fighting game with only its characters. Fox McCloud, Pikachu, Mario, Link and Kirby are some of the many fighters available to be controlled. Today Nintendo has in this franchise a real gold mine!

Fans of sports games and especially football should definitely try International Super Star Soccer 64 once in their lifetime . It is the perfect evolution of the Deluxe , released for the SNES. The fluid, fast and fully 3D gameplay allowed a new way to play football. Also, highlight the six game modes and the more than 70 selections available to select or play against. With a local multiplayer mode for up to four players, it was guaranteed fun with friends!

Killer Instinct Gold was transported from the arcades to the N64. It was a more limited version of Killer Instinct II , although it did not fail to amuse. For the N64, it was undoubtedly one of the best in the fighting genre. I brought a combat system similar to that of Street Figher II , with three punch buttons and three kick buttons. The fighters are the same as in the arcade version , as are the combat scenarios. Some were interactive, all in a 3D environment, although the fights were in 2D perspective. A fun game that managed to overcome the classic that was the first in the series.

Free camera, world with a similar concept to the open, secondary missions in an amount that was impossible to determine: Super Mario 64 was one of the games that made the N64 a respectable console. This title was one of the main responsible for starting the phase of 3D games in style. The game, on top of that, was huge! There were 15 giant levels, with 120 stars in total. Anyone who never cleared it certainly has great regret. And whoever zeroed it, it certainly wasn't just once. In addition, Super Mario 64 served as the basis for other good Nintendo games, such as Banjo Kazooie .

Some say that GoldenEye 007 was the basis for many shooting games today. Whether that is true or not, the fact is that this was the best shooting game for the Nintendo 64. Even though it was released 2 years after the film, it gathered a legion of fans around it and even around the 007 franchise . The multiplayer was something phenomenal. The missions led the player to have to break their heads to reach the end alive, as they were complex and deep. The gameplay was surprising for the time, mainly because it was a game from the early stages of the console.

This was the first game in the franchise in 3D. This meant an unprecedented evolution for Bomberman . Now players could look in eight different directions, even having to control the camera. The movements made by the character were expanded, as well as the explosion effects of the bombs. The game has four initial stages, plus a secret one. You can unlock other arenas for multiplayer , as well as an option that makes Bomberman start the levels with maximum power. Mario Kart 64 (1996) Mario Kart 64 is proof that a franchise can be eternal and always be of quality. More than two dozen tracks, classic characters and battle arenas: MK 64 was simply the best of its kind so far. Even today, there are those who say that no title in the later series managed to surpass it.

Redident Evil 2 is practically the product of a magic on the Nintendo 64. That's because the game was originally released for PlayStation on two CDs. Nintendo's mission was to transport all of this to a 512-bit cartridge without losing the quality of the original. And did not lose! Everything we have in the PS1 version we have on the N64. This also served to launch one of the biggest gaming companies in the business, Rockstar San Diego. At the time it was called Angel Studios and performed one of the greatest miracles in the gaming world.

Pokémon Stadium was praised as one of the best Nintendo 64 games. It is not free that there was a sequel. And Pokémon Stadium 2 is really fantastic! The graphics were unbeatable, and the whole idea of the fighting continued to be successful. Mainly with the inclusion of Johto's Pokémon. PK Stadium 2 still had minigames that practically breathed new life into the title. Whoever owned a Transfer Pak managed to pass their Game Boy monsters to the game's battles, which made everything even better! The 10 best Pokémon games

Banjo Kazooie was one of the best things ever produced in gaming history. Even the most ardent fans of Mario gave their arm to root for the importance of the game . Banjo and Kazooie, the characters who give the title its name, were innocently funny, sarcastic and full of acid strips that made many people's childhood. The game had an exploratory footprint, being totally based on Super Mario 64 , although it improved its movements and actions. The game is phased, with 12 in total. The movements of the game are learned as the characters evolve, with some areas accessible only after learning these movements.

Majora's Mask was not as impactful as the next game on the list. Still, all real gamers recognize the importance of the title for the evolution of digital games. Mainly in narrative terms. The way Link related to other characters, the dialogues, the many side missions gave the game enormous depth. The only thing about Zelda: Majora's Mask is the campaign. Unfortunately it is very short in relation to the importance of the game. But, as stated above, the countless characters and side quests make the game a true masterpiece.

Many experts and players claim that Zelda: Ocarina of Time is the best game ever created. Opinions aside, it is in fact the best Nintendo 64 title. Many elements common in games of the current generation are original from Ocarina . Aim stuck on enemies, character evolution and that mix of game and cinema are things that came up in that game. Finally, the story. If you've never played Ocarina of Time , play. Especially if you are a fan of complex narratives, deepened not only around Link, but from the whole game world. There is nothing to point out of flaws in this regard. Even more that this game revolutionized the industry in terms of how to tell a story.