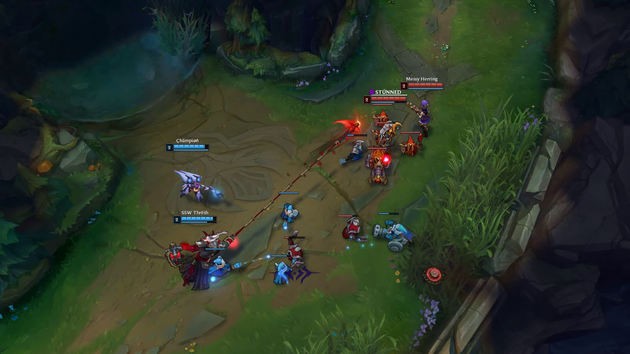 In League of Legends, it is very common for players to be stuck for a long time in the same Link, without knowing how to evolve. So we've put together some advanced tips used by many professional players to help you take the next step in the game. Several tips appear to be only details, but they are precisely what differentiates low level players from more experienced players. So, if you want to play like your idols, nothing should be discarded. Check out 7 advanced League of Legends tips below!

1. Use the S key to help with your last hits

In LoL, whenever you are responsible for delivering the last blow to a minion, you get more experience and more gold. This practice is called the last hit and it is so important that it is considered a criterion for assessing who is doing better in the lane. The higher the CS ( creep score ), the more farmed the player is. Training the last hit involves several elements, from the damage and the attack speed of your champion to the travel time of the projectiles in the case of long-range characters. In addition, it is important to be aware of your character's status changes when leveling or purchasing new items. A great way to control your attacks well and greatly increase your chances of last hit is to use the S key to interrupt your character's animation. So, when you start an attack and realize that you won't hit the last one (because you missed the timing), press S immediately and attack again. In practice, you can even cancel the animation several times and only release the attack at the last minute.

2. Use shortcut keys to better match

Caiting, in Lol, means attacking and moving away from the target, right after. It is generally best used by close-range champions and is an essential technique for playing at a high level. In the shortcut menu, look for the "Player Movement" tab, find the option "Click - player attack movement" and define a shortcut key for the function. That way, whenever you press the defined key, your character will attack the unit closest to your cursor, without the need to click on it. The technique is extremely useful to avoid miss clicks and make your champion attack at the maximum distance possible. Although it requires you to change an essential part of your gameplay, there is no doubt that defining a shortcut to this function will bring many advantages to your gameplay.

3. Save your gap closer

In LoL, gap closers are skills that allow your champion to quickly approach opponents, thus closing the distance between the two. This ability is often used at the beginning of TFs (team fights) to start combat, or even to execute ganks more quickly. Try to keep your gap closer as much as possible. Most players use these skills at the beginning of battles out of sheer custom even when not needed. So look at the possibility of starting ganks differently and use gap closers only when opponents try to escape. A good tip is to run to where you expect the opponent to run away from your partners, use your damage skills and leave the gap closer last, if necessary.

Many players don't know, but the F1, F2, F3, F4 and F5 keys move the camera instantly to the other team members. This tip is especially useful for junglers, since, in addition to cleaning the jungles, they are responsible for rotating and often helping with ganks. So paying close attention to everything that happens on the map is essential. As not all players value effective communication, use the F keys as much as possible to find out the situation of your teammates and plan your next move.

No matter the genre, any game that can pit one character against another has the concept of match up. Match ups consist of comparisons between characters in order to know which one wins in a 1x1 match. In LoL, for example, compare champion characteristics, skills, builds and level progression to find out which characters have advantages over which. Although the game has more than 130 characters, the sooner you worry about learning your favorite champions' match ups, the faster you will see their progress. Knowing which champions are strong and weak against yours directly affects your choice at the start of matches, and allows you to make useful choice suggestions for your teammates. If you play as a jungler, knowing the match ups of your laner partners also helps a lot, allowing you to give more support to the champion who has the most handicap in his lane. This, of course, is only possible if you know about this disadvantage.

This tip is not so advanced but it always needs to be reinforced. Use the ping system as much as possible to pass on information to your team. Although this tip should be applied by all players, it is even more necessary for junglers, as they move around the map more often. Often players end up paying attention only to what happens in their lanes. Therefore, using the ping system to show quickly and efficiently what your plans are, and especially when an opponent is missing, is essential.

7. Capitalize on the information received

Knowing what's going on around the map is not enough to become a good LoL player, but acting on that information definitely increases your level automatically. If your team has decent communication and you have good map attention, start practicing how to react to the information obtained. For example, if you are top lane and see that the opposing team is ganking bot lane, it is time to be offensive, whether cleaning up the enemy jungle or invading. The least you can get out of this is to make the opposing team retreat, that is, you will help on the other side of the map without having to be there. This type of reactive play is a skill that you have never mastered 100%, after all, you need the opposing team to perform it. Stay tuned and keep in mind the following “what can I do to hinder what my opponent is doing right now?” This question should come up several times during the same game. Click here for more LoL tips and tutorials! CSS Cleaner is a brilliant free online tool to take care of your dirty markup.