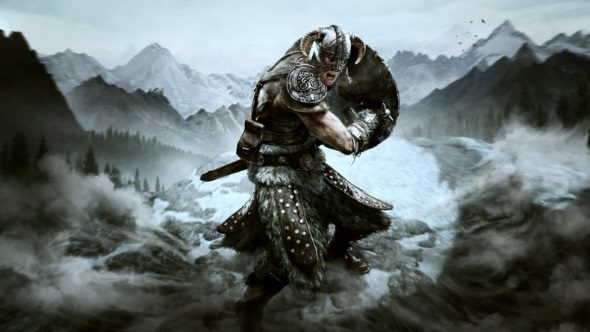 Elder Scrolls V: Skyrim , released in 2011 for PlayStation 3, Xbox 360 and PC, contributed a lot to the popularization of RPGs in the open world. The success of this game was so great that a special and remastered edition was launched for the eighth generation consoles, such as PlayStation 4 and Xbox One. This, however, was not enough to appease players' anxiety about new games of the genre. If you are one of the many gamers who are looking for games that look like Skyrim or at least bring the same atmosphere to it, look no further. In this article we bring you tray to the best titles that resemble Elder Scrolls V . Check out what they are and get ready to enter open worlds full of legends, myths and secrets.

Platforms: PlayStation 4, Xbox One, Nintendo Switch and PC Let's start with a big title soon. Dark Souls Remastered is a breath of life given to the first title of the eponymous franchise. Its similarity to Skyrim is enormous in terms of narrative and in terms of game atmosphere, although not so much in gameplay. Both take place in a mythological land, plagued by monsters, demons and gods. In that sense, whoever explored the cold and gloomy world of Skyrim , will feel at home in Dark Souls . In the fictional realm called Lordran, you will control a character known only as Chosen Undead . As in Elder Scrolls V with Dragonborn , your mission is to break a curse. The game is all in third person. The combat system is similar to Skyrim's , but much more strategic. The degree of difficulty of the enemies is absurdly high, something that has become a hallmark of the franchise's games. Those who really like to be challenged, will certainly have an unforgettable dose of adrenaline in the battles of Dark Souls . The evolution of your character takes place from the evolution of your attributes, in the best molds of RPGs. Issues such as stamina , strength, intelligence and agility must be improved as the story progresses. This evolution is not in the game for nothing, as it is really important to defeat more powerful enemies. Something that Dark Souls Remastered has, as well as its first version also had, is an online mode. It allows players to interact in a variety of ways. It is possible to receive tips from other players on puzzles contained in the campaign. There are one on one battles, just as there is a cooperative mode. All the warriors of the same game session can get together to beat opponents considered more difficult. You should play this game if:

Platforms: PlayStation 3, PlayStation 4, Xbox 360, Xbox One and PC Necessary presence in this list, Dragon Age: Inquisition offers everything a lover of Skyrim needs. Amid a deep and well-developed narrative, the player takes on the role of a warrior chosen to end a civil unrest on the continent of Thedas. At the same time, it must close a hole that opened in the sky, known as Breach . As in Skyrim and Dark Souls , the player is seen as a legendary choice. You are known as The Inquisitor. Your character would have a mark, capable of closing the Hole and preventing the demons that come out of it from infesting the earth. Your ultimate enemy is a creature known as Corypheus. As you can see, there are many similarities in terms of narrative between Dragon Age: Inquisition and Skyrim . This is quite attractive, as you remain immersed in a mythological and magical world. You can also create your avatar at the beginning of the game, choosing from a few races. You can be dwarf, elf or human, as well as a race known as Qunari. It is possible to customize various physical aspects of the character, as well as the genre. Among three classes: mage, warrior and thief. Each class can and must be specialized to obtain special skills. As you progress through the game, you become the Inquisitor. In this position, you are introduced to narrative choices that affect the world in which the game takes place. It is even possible to judge and condemn people based on acts committed by them. In addition, you can control characters other than the Inquisitor, who are your traveling companions. Something that differs from Dragon Age: Inquisition from Skyrim is the fact that the former is not exactly an open world. There are several sections on the map that can be explored, yes, some of which are larger than previous games in the franchise. In terms of combat, you can control any character in your party. At the same time, you can pause the game and distribute your characters along the battlefield, for better results. You should play this game if:

Platforms: PlayStation 4, Xbox One and PC The Witcher 3 has achieved a highly prestigious position with RPG players. With a vast open world, exciting main storyline and engaging side quests , it is a game that needs to be played by anyone who is passionate about Skyrim . Although dragons are only a distant mention in this game, The Witcher 3 has many beasts for you to face. Taking control of Geralt de Rivia, a wizard and monster hunter, you are after the Wild Hunt. This group is plaguing the Northern Kingdoms with an unrelenting army. In addition, his protégé and disciple, Ciri, is missing and is being pursued by the Wild Hunt. In the middle of the various missions that involve this main plot , you travel on horseback or on foot on a huge map. In fact, it is estimated that the game map is 20% larger than Skyrim's . On this map you are presented with dozens of side missions. They involve everything from retrieving a pot for a lady to defeating an enraged Griffin. All of this entails over 200 hours of gameplay, including the base game and two more expansions. In that sense, The Witcher 3 is very similar to Skyrim . There are countless hours of missions, in open and medieval settings or in caves, using swords, spells and potions to defeat your enemies. Especially during the main missions you realize that your choices impact the world in which you are inserted, which leads to the possibility of alternative endings. Extra activities were included in this game, such as the possibility of going to the barber and changing Geralt's appearance. You can collect cards as well, which form decks from a game called Gwent. There is the possibility of swimming, boating, modifying your clothes and building legendary swords. It is definitely a full RPG and action experience. You should play this game if:

The Lord of the Rings: War in the North

Platforms: PlayStation 3, Xbox 360 and PC Middle-earth narratives inspired the creation of many games, and Skyrim is certainly one of them. That is why War in the North is a title that could not be missing from this list. It is the first game inspired by both Tolkien's books and Peter Jackson's films. The narrative is parallel to the events of the films and books. You control a member of a trio of adventurers, which consists of a dwarf, Farin, an elf, Andriel, and a human guardian, Eradan. At the beginning of each stage you can choose any one of them to control. It is always possible to repeat the missions by controlling the other characters. Each character has their own skill set , according to their race. Eradan, for example, uses a shield, sword and bow and arrow. All his skills are focused on stealth. The dwarf, as expected, acts focused on physical combat. Their most common weapons are battle axes. He finds money and items. The elf Andriel, in turn, uses a staff, a shield or a one-handed weapon. Can cast spells and make potions. The plot makes these adventurers look for a Numenorian servant of Sauron, who is in charge of attacking the north of Middle-earth. Throughout the game's missions it is possible to connect this narrative with the narratives of books and films, which is quite interesting. War int the North features single player mode and online multiplayer mode . In the first, while you control a character, the other two are controlled by artificial intelligence. In the second, online players control those you don't control. You should play this game if:

The Legend of Zelda: Breath of the Wild

Platforms: Nintendo Switch and Wii U Breath of the Wild is on this list not only because it is an open world game. The latest title in the franchise innovated The Legend of Zelda and brings Link on a deep and complex adventure. Like Skyrim , here there is a great involvement of the player with the narrative and with the mission to fight the forces of evil. Link wakes up from a hundred-year-old sleep and now needs to recover his memories. But not only that: one of the great antagonists of the franchise, Calamity Ganon, is back and needs to be stopped before he destroys the world of Hyrule. This occurs in a wide open world, where you have to solve major and minor quests , in addition to puzzles . The gameplay is innovative for the series. In addition to the high definition visuals, there is the presence of voice acting and a physical engine that favors combat in the best Skyrim style . The player is encouraged to progress in the game in a non-linear manner. In addition to the missions related to the main storyline, there is a lot that can be done. It is interesting to say that in Breath of the Wild Link you can swim, jump, run and even fly in a kind of paraglider . All activities, however, including combat, depend on the amount of breath that Link has. Items are now perishable and may break with use. These same items have dual functions. A shield, for example, can serve as a board to slide across surfaces. Climatic variation also has an effect on gameplay . You can use storms, for example, in aquatic environments to generate more damage. Throwing iron objects at enemies can still attract electrical discharges towards your opponents. You can also use the scenario to defeat enemies, if you think this is the best battle strategy. You should play this game if:

Platforms: PlayStation 4, Xbox One and PC Let's end this list with a game belonging to the franchise The Elder Scrolls . The online version of this universe is the first game completely in multiplayer mode and was received with great interest by Skyrim fans . The gameplay is very similar to the other games in the series, without the need to follow a narrative linearity. In fact, one of the reasons for the success of The Elder Scrolls Online is precisely the fact that the main narrative can easily be left out quickly. The amount of content is enormous, allowing the player to explore side missions in virtually all regions of Tamriel. Early on, you must choose your class, in addition to the usual breed. It can be a Templar, a Dragon Knight, a Sorcerer, a Nightblade or a Warden. You join one of three factions that are in conflict for Tamriel's throne. You can therefore fight against members of rival factions at a specific location within the kingdom's capital. Anyone who fell in love with Skyrim must play The Elder Scrolls Online . The vastness of the map and the possibility to interact with thousands of other players is an incredible experience. Level up, acquire mounts, legendary armor and become a mythological warrior in the world of Tamriel while playing this game. You should play this game if: Are you in love with Skyrim ? So, get to know games similar to Dark Souls and have fun!