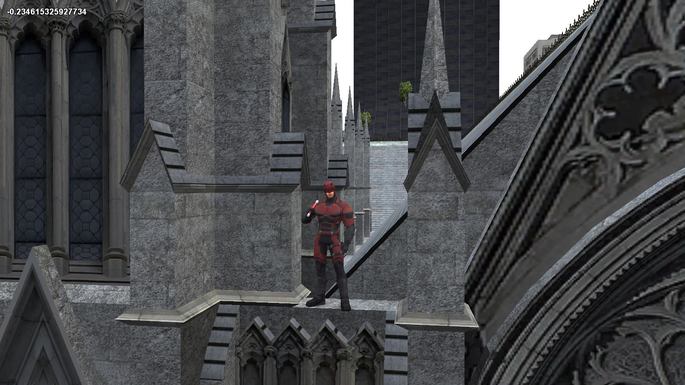 Every good game in the Grand Theft Auto franchise is also known for bringing super fun mods . In the case of GTA IV it is no different! The game community is very creative and has created dozens of special modifications for Niko, Liberty City, vehicles and so many other things in the gameplay . In this article we have separated the best from the best so that you can make your GTA IV personalized just the way you want it!

DOWNLOAD Who never wanted to be Captain America? If you are a fan of Steve Rogers, this is your chance to hold the First Avenger’s shield and fight crime (or not) in Liberty City. The mod is super well made, with all the details of the uniform of the great leader of the Avengers.

DOWNLOAD The Dark Knight is another good choice for those who are tired of playing with Niko. It's much nicer to walk through the city nights controlling Batman. Unfortunately you don't have access to the Batmobile or the bat's super accessories, but you can still hit your enemies in style.

DOWNLOAD For anyone who wants to run and escape the police, Sonic seems to be one of the best choices! The Sega mascot is an ideal mod for those who like this character and for those who want to make things less serious in their GTA IV . This modification, as you can see in the image, also brings Taylor, as well as other classic figures of the game.

How about circumventing gangs and rivals with Lionel Messi? One of the most bizarre and funny mods in GTA IV . Of course, Niko does not gain the Argentine's ball skills, but it is very interesting to cross the streets, steal cars and shoot around, controlling the best player in the world.

DOWNLOAD Link's new adventure is now in Liberty City. Zelda's protagonist got tired of the forests and green fields of Nintendo games and decided to become a gangster . The mode is awesome and brings a very faithful Link to the well-known games of the franchise of which it is part. Including its giant head.

DOWNLOAD Netflix's Daredevil is back! After Hell's Kitchen, Liberty City is now the target of his ire. The coolest thing about this mod pack is that other characters from the Marvel series are available. Such as Elektra, Punisher and the Kingpin.

DOWNLOAD The great god of war of God of War has arrived in GTA IV and promises to have no mercy on enemies. The mod is based on Kratos from the beginning of God of War II , bringing his armor all XPTO. It is a pity that you cannot use the blades on your back, which is certainly unnecessary. Just use a bazooka!

DOWNLOAD No one denies that Leon is the best agent for The Resident Evil . And it has everything to do with GTA IV ! Even without zombies, playing with it can be really fun, remembering the good times of TRE 2 and even 4 .

DOWNLOAD Jason Vorhees is immortal in his films, but not in GTA IV , so don't even try stabbing rival gangs that you're going to go wrong. But who knows how to run after pedestrians from time to time?

DOWNLOAD The agent going famous in the gamer world is a really cool mod for GTA IV . Despite Snake's more stealth style , it can be quite fun to see him in chase or frantic escapes, riding a motorcycle.

DOWNLOAD This mod does not change Niko's appearance, but it does leave him "half" Superman. He can fly at high speed, even leaving a trail of fire behind him. You don't have a laser beam or an alien force, but being able to fly whenever you want and wherever you want is reason for celebration!

DOWNLOAD The "Hulk Mode" is one of the coolest mods on the list. Not only will you look like the emerald giant, you will also have your powers. Notice in the picture that there is even a level of anger. The angrier your Hulk gets, the stronger and destroy it he will become. Perfect for playing on bad days ...

DOWNLOAD Like the mod above, it changes its appearance and adds powers. The Ghost Rider has his magic bike, which even passes over the water. In addition, you will have the fire powers of this hero, being able to terrorize your enemies without using the weapons of the game.

DOWNLOAD Only pedestrians and some objects float around Liberty City, but that already makes their missions at least more interesting. Niko remains with his feet firmly on the ground, which can make it difficult to kill one or the other rival. But if you use the Superman mod together, things can get even cooler.

DOWNLOAD There are many mods that put Niko in the 1st person. This is one of the few that allows you to change the camera whenever you want. The only detail is that this only works even when driving or driving a vehicle.

DOWNLOAD Topol M Russo is one of the most furious missile launchers in the world. A weapon you will surely be happy to have for some of the more explosive missions in GTA IV . Even if that missile in the image above is only decorative and cannot be launched.

DOWNLOAD Anyone who ever wanted to know what it's like to fly a balloon like the one in the picture now has that opportunity. The experience will be strange at first, but it can be a lot of fun if you use the 1st person driving mod . Try traveling through the nights of Liberty City and, who knows, even throw the balloon at an enemy.

DOWNLOAD You can fly the Avengers Quinjet by controlling Captain America. Or Batman, who knows? The fact is that this beauty gives the game planes another face, making the game much more like the one who is a fan of Marvel movies or comics.

Installing the mods is simple. All you have to do is enter the folder where the game files are located. More specifically, enter the folder that contains the file "GTAV.exe". Now paste the files of the modifications you want to have in your gameplay . But be careful! Follow each mod's guidelines before doing this. There are cases when you need to replace a particular folder or file. In others, it is necessary to use an application for the installation to be completed. If you want to play online , remove the mods from the game folder. Rockstar does not support these modifications in multiplayer matches , although it is not "against" its presence in the single player . If you don't want to be banned from the game , avoid going against the company's recommendations. Finally, it is common for mods to have problems and corrupt their save files. So it is good to do some kind of backup of them so you don't lose your progress. Meet 10 crazy mods from GTA San Andreas Dominate Los Santos with 12 insane mods ! Always use the JS Compressor to shrink before you publish a website.