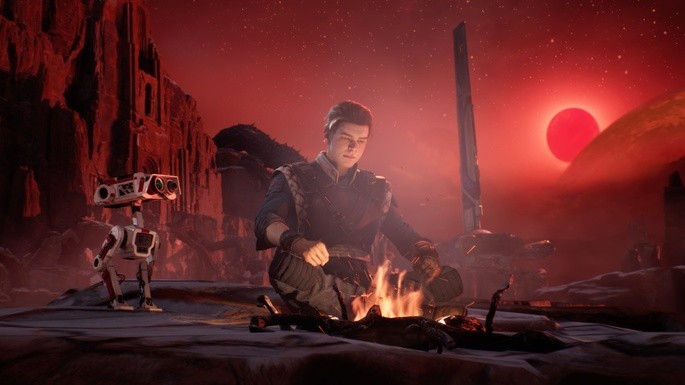 Star Wars Jedi: Fallen Order arrived with everything and exceeding expectations! Despite having elements of combat and gameplay from Dark Souls, the title is easier than DK. Still, it requires attention so that you don't die all the time. That's why we created this article with 12 tips to help you on your journey as a Jedi!

1. Use the meditation areas carefully

As we said above, many elements of Dark Souls are in Fallen Order, although they appear in other ways. One of the most similar is the existence of meditation areas. They resemble DK bonfires, as they have the same purposes: checkpoint , increase skills and rest. The chekpoint is important, of course, as is going to the skill tree and placing points here and there. But rest? This may not be so smart. Of course, rest restores energy and armor, but it also revives all enemies in the area. In other words: do you recover your lost life and lose it again? Always check if it is worth doing this!

2. Learn to block and parry

It's about picking up a lightsaber and you already want to hit everything you see. Okay, we understand. But in Star Wars Jedi: Fallen Order, that doesn't always work. In fact, almost never. The combat system will require you to defend yourself from attacks. Otherwise, it is certain death! So learn to block and parry . Parry , for those who don't remember, is when you defend, but leave the enemy vulnerable to a counterattack. Use this mainly against stronger enemies, such as the Sith.

3. Don't waste the potential of the Holomap

In games like Fallen Order the tendency is not to use the map very often. Okay, you can follow your Jedi instinct and go crazy, but the Holomap is a very useful tool. Just like the droid BD-1. It is he who, at his command, reveals the holographic map that contains all the information about his journey. Places you went to can be consulted on Holomap. BD-1 still marks on that map shortcuts and detours that may be important to you. Pay attention to this, as there are areas blocked at the beginning of the game and that you can visit later. They usually store items to customize BD-1 and the player himself, as well as items to improve his lightsaber.

4. Combine physical attacks with the use of Force

You will have the chance to unlock good skills in the first few acts of the game. And we need to remember that they are not just any skills: they are skills of a Jedi. So instead of simply hitting all enemies with lightsabers, use the Force together! Physically attack an opponent, but use the Force to knock others away. Instead of dodging an attack, use your Jedi powers to slow down some opponents. This makes the fight more dynamic and exciting, as well as much faster and less dangerous for you.

5. Interact with the scenario to discover secrets

Cal, the main character in Fallen Orders, has several hidden powers. They can be reactivated in several ways, one of which is the discovery of memories about your past. For that, you must interact with the scenery, scanning everything around you. From lost temples to rocks, fauna and flora. The information obtained is stored in a codex, an in-game book that serves to feed the player with data about the game's universe . Even enemy data can be obtained with the scan , which can be valuable for going through more difficult battles.

Speaking of enemies, another combat tip. And it's kind of obvious, but not everyone follows it. Wanting to face enemies in large groups, even weak enemies, is a big mistake. The chances of you being surrounded are huge, which eventually, even for a Jedi, can mean death. Dying means you have to go back to the last checkpoint , which means wasting time. So, when entering an area full of enemies, do that scan and see which ones are isolated. Eliminate those first. Keep reducing the chances of being surrounded, so you don't have problems.

A general rule in games of the genre: always eliminate enemies with long-range weapons first. In the case of Fallen Order they are those with blasters or even with rocket launchers. These troopers can do a lot of damage while you deal with enemies that use sticks. Using force to slow down your shots is an interesting idea. Just don't try to block rockets using lightsabers, as you would when blocking blaster shots . The rockets will send you straight to the last checkpoint .

Here is more to reinforce one of the coolest parts of the game. Unfortunately for some, Fallen Order does not allow us to have much "freedom". The game is all linear, the character cannot be created from scratch, among other things. But the lightsaber can be styled to be unique. You can customize everything on the gun. From the crystal, which changes the color, to the material from which the saber is made. In fact, the saber can be double, like Darth Maul's! And even red, the color of Sith sabers. If you want to honor Samuel L. Jackson and Mace Windu, make a purple weapon! In fact, using a double saber in areas with many enemies can be smart. So customization is not only aesthetic, but also helps you in battles.

Cal's evolution tree has 3 branches: Lightsaber, Strength and Survival. To use the saber, you must have strength. That is why you should dedicate the first points of evolution to this branch. Survival, on the other hand, will make you have more hit points, allowing you to survive combats more easily.

10. Use life recovery while blocking

You can click on your D-Pad and ask BD-1 to increase your life. This, however, blocks Cal's movements for a few seconds and leaves him open to receiving attacks. To avoid this, the tip is to first block. While blocking, ask for BD-1 to increase your hit points. What can happen is that you are attacked, and the attack will be blocked. This will interrupt the process of gaining life, but at least you are not completely exposed to enemy blows.

11. Watch out for enemies that turn red

Troopers turned red? Bad news! They will launch an attack that is impossible to block. But as you are a Jedi, no reason to panic! You have three alternatives when this happens: Either way, be quick. You will take a lot of damage if you simply try to block this type of opponent.

12. Pay attention to the red dots on the scene

Tomb Raider and Uncharted lent an element to Fallen Order: whenever a red dot appears at a certain point in the scenario, you can use it to your advantage. Whether to climb a structure or to take a zip line and escape from a collapsing space. Keep a close eye on these points, as they can save your life! This document was edited with the instant web content composer. Use the online HTML editor tools to convert the documents for your website.