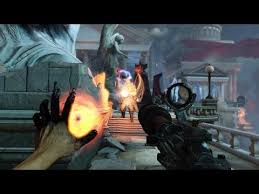 We have selected the top 12 shooting games that run smooth on more modest or older PCs so you can keep exercising your trigger finger. Few genres mix action, suspense, skill and strategy as well as a good shooter. Therefore, there are always games that are worth playing. The games on this list are light for the PC, but that doesn't mean they are bad. On the contrary, some have really cool features like good stories, lots of different weaponry and lots of action! Below the description of each game are the minimum PC requirements.

A very realistic game, with an original narrative and that doesn't get cheap patriotism like other games of the same genre. The game is third person, a rarity at the time of release, which conveys well what is a combat situation. Control your patrol of highly trained Operators on dangerous missions in Campaign mode or try cooperative mode with friends. Multiplayer mode exists, but has few active players.

This iconic game puts the player in the position of sniper, an expert in precision shooting. With really cool missions in WWII historical sites, Sniper Elite requires patience and good aim. If you love headshots, this game is your face thanks to the great care the creators took when creating the shooting mechanics.

One of the most famous shooter games ever, COD Modern Warfare 2 broke record numbers even before it was remastered. With a very well designed (albeit short) campaign mode and ultra fast and addictive multiplayer matches, the game remains quite popular. This new version has Special Ops mode, where two players can play classic or completely new missions in a cooperative manner. The game also allows greater customization of different weapons and equipment.

Return to the Far West as a cowboy armed with pistols, shotguns and even dynamite. With cool graphics and well-designed stages, full of heavily armed bandits and other typical details, the game can be very dynamic, highly addictive and fun. A real tribute to the old cowboy movies.

The third title of the Far Cry franchise redefined the original game. Now with a huge open world map, the player has more freedom to explore while eliminating enemies, hunting down dangerous animals and discovering many secrets. With a rich history and cool characters, Far Cry 3 is pure fun, with moments for all tastes.

New York was ruined following the famous Crysis. A very fluid game packed with epic battles with absolutely fantastic graphics, Crisys 2 manages to put the player in the middle of the action. The nano-armor and the rest of the weaponry do their job well, turning the player into a real combat machine.

Many players consider Battlefield: BC2 one of the best titles in the franchise, even compared to some current games. With dozens of different weapons and lots of vehicles to drive or drive, the game has action packed shooting, shooting and explosions. Multiplayer mode is, as usual, the raison d'être of the game. But the solo campaign is also very cool, with jungle maps, scorching deserts and snow-covered enemy bases.

The makers of the classic Counter Strike remastered the game, bringing together new weapons, new maps and obviously much better graphics. The result is CS: GO, nothing very original, but perfect for players who enjoy highly competitive tactical shooter games. Pairing can be done casually or competitively and there is no shortage of matches to enter thanks to the huge community of players.

A top-down shooter that needs a lot of strategy to progress. Control your soldier as you advance across the terrain by completing surprisingly realistic varied missions. By gaining experience you will gain new weapons as well as the support of different vehicles and artillery. Another strength is the very effective artificial intelligence that commands your allies and enemies. The game also has multiplayer and cooperative mode and recently allowed players to create their own missions.

Deus Ex: Human Revolution is a game with tone noir graphics , in a well created futuristic environment, with a beautiful soundtrack. The player can use different strategies to complete the missions, with more subtle methods or dropping bullet left and right. The atmosphere of the game is almost cinematic, thanks to a mysterious narrative and great moments of suspense.

A game that depicts the fierce battles of World War II, especially those that took place in the Pacific. Realistic, with varied weaponry and sublime maps, perfect for epic 64 vs 64 player battles . On the one hand, American troops with greater firepower and weaponry. On the other, the warrior spirit of the Japanese and their kamikaze tactics. The game also gives the player the chance to participate in the European front maps of the Red Orchestra title.

Get ready to loot and shoot everything that moves with hundreds of different weapons and take on insane bosses in one of the most addictive games in history. The sequel to the famous Borderlands brings new elements to the game like Classes, new characters and new enemies. And new weapons, of course. Hundreds of different weapons, plus explosives, shields, and equipment you can change as you like while making your character grow stronger. Don't forget the awesome Co-Op mode to experiment with your friends.