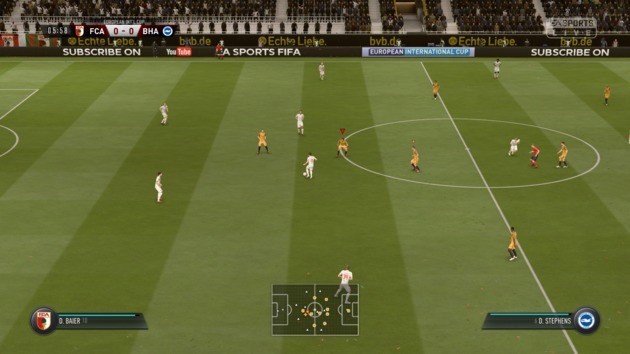 FIFA 19 arrived with a series of new features compared to the previous version. Changes have been made to both the defensive system and the offensive system, which requires some practice. In other words: even the most professional people need some tips to reach mastery and victories on virtual lawns. In this article, therefore, you will see some essential tips for those who want to do well in "fifoso". They range from careful marking to the right way to attack and reach the opponent's goal. It is to become the best player of all!

1. Use and abuse the new Dynamic Tactics

One of the most celebrated novelties by those who were already FIFA veterans was the introduction of the new tactic system. It is now possible to define how your team will behave both defensively and offensively. It is possible to combine a defensive form in the rear with a fast offensive exit, in counterattack, for example. But that only has value even if you use Game Plans. The Ultradefensive, Defensive, Offensive and Ultraofensive Plans can now be edited prior to entering the pitch. It is possible to define specific schemes and tactics for each Plan. It may not seem like it, but it changes the whole dynamics of your team. Using this new way of tactics is therefore essential. Only then can you adapt your style of play to opponents and different ways of playing yours.

2. Cadence the game and own the ball

FIFA 19 is much slower than FIFA 18. In fact, in the previous title it was enough to run with a super fast player for the defenders and that's it, the goal was practically guaranteed. Not anymore. Players get tired more quickly when they spend the whole game running from side to side. Which leads us to the fact that the best thing is to keep the power of the ball. With the ball at your feet, you must beat the game. Touch the ball calmly from one player to the other. Take advantage of the defensive midfielders, defenders and full-backs to do this when setting up the team for the attack. A big mistake for many beginning players is wanting to go offensive midfielders and attackers directly into the opponent's area. There needs to be a progression from the defensive system to the defensive system. In this sense, the first tip and this go together. Establishing tactics that match your game system is very important. And in FIFA 19, opt for tactics that allow for a slow, patient but efficient game.

3. Have patience in defense

Scoring goals everyone knows. Defending, however, unfortunately is the weakness of many players in FIFA. Since the Tactical Defense system was implemented, it is difficult to give boats and carts at the right time. An advantage of FIFA 19 is that this system is more simple to master. Still, the premise remains that having patience is the best business to defend . Don't be in a hurry to steal the opponent's ball. If you have lost possession of the round, retreat the team and surround the opponent. Try to press in all areas, however without precipitation. It is even worth allowing the other team to get a little closer to your intermediary, if that gives you more chances to regain possession of the ball. Game reading is very important here. Try to identify the opponent's style of play. Notice if he plays more on the sides of the field or if he will try to infiltrate through the middle. This facilitates the boat at the right time. And the boat needs to be taken upright, preferably, so avoid the cart. All you don't need to do is make a foul at the entrance to the area or even inside it. One last tip on defense is to leave defenders in place. A cohesive and efficient defense system uses defenders only as a last option. Choose to defend progressively: first with the attackers, then with the socks and lastly only with the men of the defense, if there is no alternative.

Learning the right timing to make passes is not exclusive to FIFA 19. In this last title in particular, however, having this skill is essential. As you may already know, the defensive system is smarter. Both the defenders and the first men in the middle frequently anticipate themselves to intercept the opponent's ball. At the same time, the famous "body game" has also been improved. The bigger and stronger players are now able to beat those with less physique. From this, it is necessary to have an idea and almost perfect timing of the pass. Know when the short and quick pass between closest players is best. So you should know when it is better to risk the long pass.

5. Vary how to attack

Until you come face to face with the goalkeeper there is a long way to go, with at least ten opponents. Now that you know how to defend and exchange passes correctly, you need to learn how to attack. In FIFA 19, attacking requires strategy. Think of the lawn as a large checkerboard, where every move you make is intended to leave an opponent behind. With this in mind, it is to draw your strategy thinking about two different types of attack: counterattack and positional attack . The counterattack is based on playing on the opponent's mistake. It is to steal the ball in your defense field or even in the middle of the field and go quickly to the opponent's area. The problem with the counterattack is that it only works in teams with very fast players. In addition, the tactic has to favor this type of strategy. As FIFA 19 brought a slower gameplay that even punishes those who run too tired, perhaps the strategy that should prevail is that of positional attack . This type of attack is basically touching the ball from one side of the field to the other. But do it objectively. Have patience, but look for the goal. One hour the opponent will open a gap in the defense and you will be able to get closer to your goal. Just be careful not to miss the timing of the pass. This can give the opponent an opportunity to counterattack.

Every Brazilian likes football Joga bonito , played by the legendary Ronaldinho Gaúcho and currently by Neymar Jr. But there is a difference between these two styles of dribblers. The former almost always dribbled in search of the goal or pass to a teammate. The second, however, often dribbles just for dribbling. That makes all the difference in FIFA 19. You have more than a dozen different dribbles and dribbles that you can do. These classy touches are in the game to your advantage, so use them wisely. Dribble only when necessary, and only if it is to go towards the goal. Dribbling backwards is not only unproductive, it can cause loss of the ball and an opponent's counterattack. Don't forget that we're talking about FIFA 19, not FIFA Street. Football is teamwork, not an individual sport.

Set balls are always an asset in FIFA. A well-fouled free-kick can mean a win over an important match. Just as a corner kick can yield goals when the game is very truncated and difficult to play with the ball on the ground. Every team has its player of excellence when it comes to taking a foul, a corner kick or a penalty. Find out who your team is and train hard with it. In addition, top players such as Messi, CR7 and Bale have different free kick styles. Sometimes being nice to one doesn't mean being nice to another. So always train and with everyone you can.

Everyone has already hit the goal and sent the ball out of the stadium when playing FIFA 19. The presence of Timed Finishing came in this edition of FIFA either to facilitate or to make life difficult for the attackers. So it is essential that you master the finishes to score goals. In addition to pressing the button to define the strength of the kick, it is necessary to click again at the right moment for the kick to go perfectly. In addition, of course, you need to direct the ball so that it does not go anywhere. It seems like a lot to think about at such a decisive time, but it's all about training. Finally, don't kick from anywhere and for any reason. Sometimes those who kick less, score more.

Even Messi and Cristiano Ronaldo get tired after a long time on the pitch. It is very important to know when to make substitutions, as an exhausted player is like one less player. Know your team and know in advance who gets tired the fastest. This makes everything easier, since in FIFA 19, as in 18, you can schedule substitutions. So there is no need to pause to make exchanges. The game itself will suggest switching when the time comes.

Something that made many fifteen happy was the fact that EA has improved the mechanics that involve crosses. In FIFA 18 it was practically impossible to take the ball to the bottom line, cross and make the ball enter the net. Now, in FIFA 19 the cross goals came back with everything and are a good game option. So don't give up on that feature. Just as corner kicks can open a game that was truncated, crosses with the rolling ball can save a lost game. Even more so if you have some of the tallest FIFA 19 players on your team . Discover the best FIFA 19 layouts and tactics