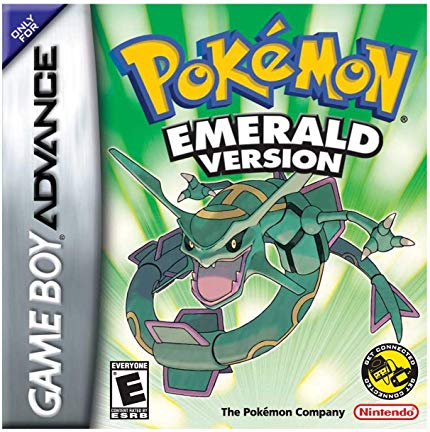 Pokemon in the safari zone: Once you have defeated the Pokémon League, it is possible to find Pokémon of the gold, silver and crystal versions in the safari area, so you can easily find Houndur, Aipom, Stantler, Mareep, Militank and many others These do not work in ruby or sapphire only in this emerald version. Pokemon specials: Castform: Defeat the rival team at the meteorological institute Chikorita, Cyndaquil, Totodile: Get 200 hoenn pokémon. The teacher will call your pokénav to give you a pokemon. Latios or Latias: After winning the Pokémon League, watch TV at home Mew: Get the old navigation chart and go to the distant island, all a challenge. The eon ticket: Mix the data with a ruby or sapphire that has an Eon ticket to stop the emerald ticket.Use it on the boat to go to the south island.After the Pokémon league.You will find a wooded area that has an egg. Press on the egg and a Latios or a Latias will come out. If at the time you said you had seen a blue pokemon on TV, Latias will appear. If you saw a red Latios. Items for ash: On route 113 there is a house in which a man will give you items if you bring ash, walk on the grass covered by it.Then take it to man.In the function of the ash you collect you can get the items here we indicate: Blue flute: 250 steps. Red and yellow flutes: 500 steps. Black and white flutes: 1000 steps. Pretty chair: 6000 steps. Nice desk: 8000 steps.Get a premier ball: Buy exactly 10 normal pokéballs at any pokémon store. As a gift for such a high purchase, the shopkeeper will give you an effective premier ball. Static electricity: The static electricity characteristic of some Pokémon has a very special effect if you have a Pokémon with that characteristic put it first in your group, it will greatly increase the chances that you will find a wild electric Pokémon. It is a useful trick to catch Pokémon rare, like pikachu, inside the safari area. Unlock the Altering cave and the Battle Frontier: Beat the four Elite and go to Route 103 New shields: Gold Shield: Win 100 battles Silver Shield: Win 50 battles Lansat Berry: Get all the silver symbols Starf Berry: Get all the golden symbols Get the Pokedex Diploma: Capture the 386 Pokémon and go to the city Lilycove to talk to the designer. Clone Pokemons: Go to the battle front, leave the Pokemons in the box, give it an object and save while saving and turning off the console. When you turn it on you will have the cloned clots. Get Bagon: First you have to go to the meteor waterfall and climb the waterfall, now go to where the Dragon Claw MT was and in that small area the Bagon appear. Get Milotic: Get Feebas, give pokeblocs to maximize beauty and then raise a level.