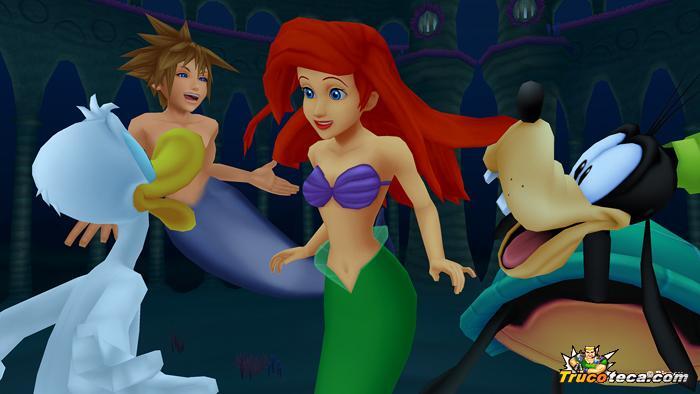 Here are a series of tips and tricks of Kingdom Hearts HD 2.5 Remix and that will definitely make the game much easier. As always from Trucoteca we recommend that you try to play without using them to get the most out of the playable experience, although you may be very helpful in obtaining certain Trophies. Be as it is and as always ... you choose.

New models for the Gummi ship:

How to get the different invocations:

Chicken Little: In the One Hundred Acre Forest, after the second scene Genius: Defeat Lord Volcano and Lord Blizzard Peter Pan: On the ship, on the second visit to Port Royal Stitch: In the hall of the habitation of Hollow Bastion's computer, after getting the perfect shape

How to get the Torn pages:

Page 1: In the Disney Castle bookstore Page 2: In the lost lands of the Oasis Page 3: In a Hallow Bastion crystal Page 4: In the land of dragons from the throne room Page 5: In the Agrabah Tower Secret end: To see it, you have to complete the game in Difficulty Expert or reach the final phase of the game having completed 100% of Pepito's diary in normal mode, which means overcoming all optional events and mini-games.

Cerberus Cup: Agrabah, Halloween and Pride Land ends. Goddess Cup of Destiny: Get the previous cups and win the fight against Xemmas. Cup of Pain and Panic: Complete the Disney cast for the first time. Titan Cup: Complete Olimpus Coliseum for the second time. Cerberus Cup: Paradox Training level must be at 5. Hades Cup : paradox Complete the previous cups, complete Space Paranoid for the 2nd time, and have all the forms and summons at level 7. Pain and panic cup (paradox): Complete all previous cups. Titan Cup (paradox). Have all the summons at level 5 and get the pain and panic cup Paradox. ( Paradox cups can only be played before talking to Hades in Hade´s Chamber)

Get the Artema sword key:

We have to manufacture it in a Moguri store with level 9 or by adding a power crystal: 1 Orichalcum, 1 Mithril crystal , 1 dense crystal, 1 twilight crystal and 7 Serene crystals in addition to the last recipe and 13 parts of Orichalcum +.

Disney Castle: In the Library where we found Queen Minnie. Kingdom lands: In the oasis where we find Simba. Hollow Bastion: In the crystal ravine, after recovering Goofy in the team. Land of dragons: In the throne room. Agrabah: In the chamber of ruins. Secret ending : Complete the game on Expert difficulty.

You have to land at the entrance of the Yen Sid tower with the Fusion to the fullest. Then go up the stairs and transform into Final when you leave the first incorporeal. Depending on the form you have, you have to arrive or not until after the first landing, where the Dragons leave. To defeat the incorporeal, equip the photonic scrubber sword key and the extra-electro ability. If when you had reached the circle before going out to the world map you were transformed, you will have the butt fusion again. Do it several times and you will immediately go up to level 7.

Secret movie The dots in white:

Complete Story mode with any character.

Do what is indicated in each case to face the two secret Chiefs.

You must complete the Final Story to be able to fight with Lingering Spirit Vanitas during the history of Terra, Ventus and Aqua.

Defeat Lingering Spirit Vanitas in Keyblade Graveyard to fight Mysterious Figure during the history of Terra, Ventus and Aqua.

Collect all Xehanort reports with each of the characters and complete their story modes to unlock the Final Story.

To unlock a video that will be shown at the end of the game about the next videogame in the saga, you must complete the game having unlocked all the tasks, complete the final story in Critical, Proud and Standard and get 100% of the Xehanort files in Standard mode

Reach level 29 in the Mirage Arena, and Strongest Shotlock will be displayed in your inventory.

Reach level 30 at Mirage Arena, and successfully complete the last arena challenge, Arena's Ruler. Now the Ultimate Weapon will appear in your inventory.

Locations of the Xehanort files:

Complete the video game once.

You will receive it by defeating Guard Armor in Ciudad de Paso.

You will receive it by beating Trick Master in Wonderland.

You will receive it by beating Cerberus and Hades in the Colosseum of Olympus.

You will receive it by beating Jafar (the Genie) in Agrabah.

You will receive it by beating Pete and Data Riku in Hollow Bastion Part I.

You will receive it by defeating all forms of Sora-Heartless in Hollow Bastion Part II.

Reward in the hidden sector of Ciudad de Paso. You need an improved version of the Scan. Location: Alleyway.

It can be obtained at the Colosseum of Olympus.

Hollow Bastion part I, reward of the hidden sector. Location: Upper level, where one of the pieces of the Emblem was located.

Level up the Keyblade:

Go to the Colosseum of Olympus. Complete it and go to the save game menu. Select the Colosseum and choose Questploration. Complete the battle system and then exit the Colosseum, where there will be a lot of enemies to crush. When you finish, go back to heal and go out again to continue fighting until you raise the levels you want.