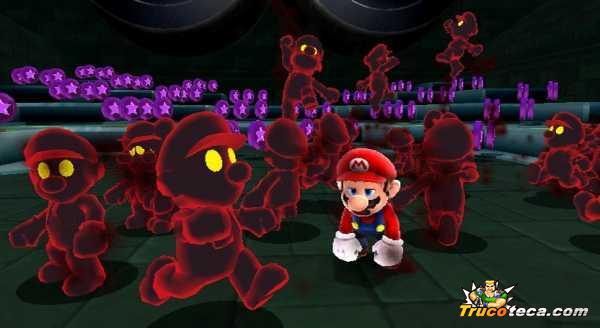 Yoshi flutters infinitely: Jump leaving pressedand before you just flutter, pressing still, squeezeand release quickly. Press A again. Repeat the process indefinitely to continue fluttering with Yoshi. Toad bankers unlockable items: Toad bankers unlock items as we deposit star pieces. But these items will not be used by Mario, but toad themselves. Glasses: Deposit 1000 pieces of star. Spear and shield: Deposit 2000 pieces of star. Peak: Deposit 4000 pieces of star. Toad driver: Deposit 6000 pieces of star. Toad explorer: Deposit 8000 pieces of star. The perfect race (great reckless galaxy driver): Deposit 9999 star pieces. Play with Luigi at any level of the game: In order to play with Luigi at all levels of the game, you must defeat Bowser in Bowser's Star Generator for the first time. Then, check Toad's email where you'll find a message from him. Now look for the L in the spaceship, enter it and you will become Luigi. Unlock the Green Star challenge: Get 120 stars and defeat Bowser, and you will unlock a new sequence in which Rosalina reads a story about a green star to her children, unlocking this challenge. Honor: Grand Master of the Galaxy: You must complete the Green Star challenge, getting the 240 stars of the game. The 120 special stars, plus normal stars, comet stars and green stars. Yoshi's infinite flutters: Jump and hold A, before the flutter ends. Press Z and quickly release A. Press A again and repeat the sequence as many times as you want. Crowns in our player profiles: Unlock crowns images next to your save profile. Silver crown: Get 120 stars. Gold Crown: Obtain 240 stars. Unlock Secret World: Complete the game once. Unlock Mundo S: When you complete world 6, an end of the game will appear, but the game is not over yet, a new world called S. has been unlocked. Achieve 99 extra lives: You see the huge galaxy, located in the middle of part of level 4-1 or so. There you will find a round platform suspended in the air on which three giant Koopas (3 turtles) constantly rotate, which you will be thrown through a green pipe (we do not know if there is another way to get there). Once on the platform, make a super-jump to place yourself on the shell of one of the Koopas and jump on it incessantly until you get a total of 99 lives on the life marker. You will not get more than 99 lives even if you continue jumping on the Koopa.