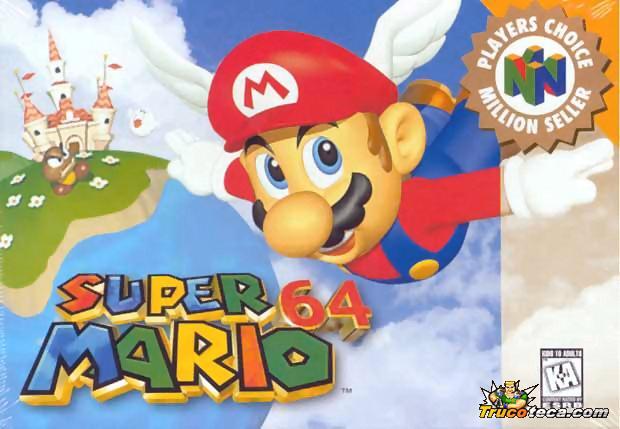 Help: With the turtle on the lava level there is really no big problem as long as you avoid contact with the wall. Cannon: To access the canyon outside the castle, get 150 stars. You will access a life, a cap and Luigi's rabbit. Get 100 lives: Get the 120 stars, leave the castle and next to the pond there will be a box that was previously closed. Enter and propel yourself towards the ceiling, where you will find Yoshi, who will give you 100 lives. Control of the final camera: After beating Bowser, connect the controller to port 2. Use the analog control stick to move the camera during the final sequence Mario's Hat Trick: On lap 8, let the vulture steal your hat. Instead of picking it up, hit it so that it falls from its claws and go to the deformed palm tree. Get the wing cap and fly back to your old hat. Get it and you'll see another cap. Take it. You should not have a hat on and if your wing cap is in your hand. Jump 3 times to fly and you will fly very high. Go to great heights safe: To be able to get safe also at great heights, you have to press Z shortly before getting up. Kill the first bad: You have to take him by the back and throw him to the ground but without throwing him down. Many coins: In the city Lethal Lava, the easiest way to get 100 coins is to enter the star Hot Foot It into the Volcano, move backwards from where you start until you reach the yellow box. Take the shield or layer of the box and surf the level (very carefully) to get a lot of coins. If you are very cautious, you will get 100 coins and you will not have to go to the volcano. Recharge energy: To recharge your energy, you simply have to sit on the surface of a river, pond or lake. Climb slopes: The slopes that you can not continue climbing, you will overcome if you jump into the air, then take a step and bring the stick down. UP PYRAMIDS Mario can climb steep slopes if you put fire on his butt. In this way you can climb the pyramids. Camera trick: After overcoming the game, you can control the camera when Mario talks to the princess and on the screen of credits, for this you must move the stick of the second command. Extra lives in the moles: On all levels where there are moles, jump over 6 of them and an extra life appears. Unlimited lives in the final battle: When you fight with Bowser for the third time, you will find a life in the top left pillar. To add cheats click on system or system then on cheats then click on the other button and add new cheat or add cheat and these are the keys: LUIGI: 8107EC40 00FF 2. MARIO GREEN: 8107EC38 007F 3. WARIO: 8107EC38 9999 4. WALUIGI: 8107EC40 700F 5. HALF MARIO : 8033B221 0000 6. BIG HAND MARIO .8033B3BB 0010 7. FIRE MARIO: 8107EC40 0000 8. ORANGE MARIO : 8107EC40 976C 9. REV.COLORS : 8107EC40 0102